Researchers found a partial skeleton including arm, hand, leg and foot fragments. They say that P. boisei may have been as tall as 4.5 feet tall, with a robust frame. 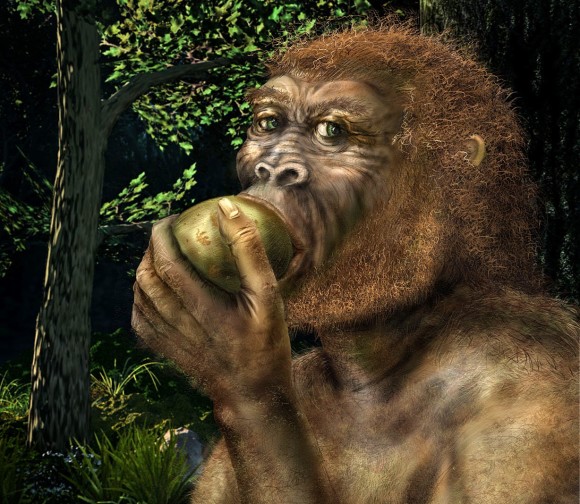 This illustration shows what Paranthropus boisei might have looked like some 1.2 to 2.3 million years ago. Image credit: Nicolle Rager Fuller, National Science Foundation

Arm bone fragments from a 1.34-million-year-old hominin, Paranthropus boisei, were discovered by an international research team in Tanzania. (Credit: University of Colorado Denver)

P. boisei was a long-lived species of archaic hominin that first evolved in East Africa about 2.3 million years ago.

Anthropologists say these fossils suggest that this human ancestor was a tree-climber, and more ruggedly built than previously thought. P. boisei has been known for its massive jaws and cranium. The size of the arm bones remains suggests strong forearms and a powerful upper body. The researchers say that P. boisei likely stood 3.5 to 4.5 feet tall and possessed a robust frame.

Charles Musiba, Ph.D., associate professor of anthropology at the University of Colorado Denver, is part of the international research team. He said:

We are starting to understand the physiology of these individuals of this particular species … We knew about the kind of food it ate – it was omnivorous, leaning more toward plant material — but now we know more: how it walked around and now we know it was a tree climber.

It’s a different branch on our ancestry tree. It came later than the other hominins, so the question now is ‘what happened to it?’ We’re going to do more work on biomechanics and see what else this creature was doing.

The study was published in the scientific journal PLOS ONE in December 2013.