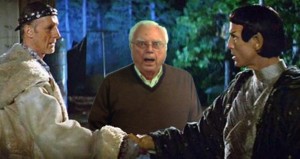 -not in story- Wouldn’t we all like to be there to photo-bomb the moment of first contact. Certainly, Frank Drake would be first in line. In the photo – Zefram Cochrane reaches out to the first Vulcan. Credit: Paramount Pictures, Illustration, T.Reyes

Thank you! Your submission has been received!
Oops! Something went wrong while submitting the form.
END_OF_DOCUMENT_TOKEN_TO_BE_REPLACED