The beautiful abundance of Rho Ophiuchi

One of the most colorful regions of the sky, Rho Ophiuchi showcases clusters and nebulae galore. 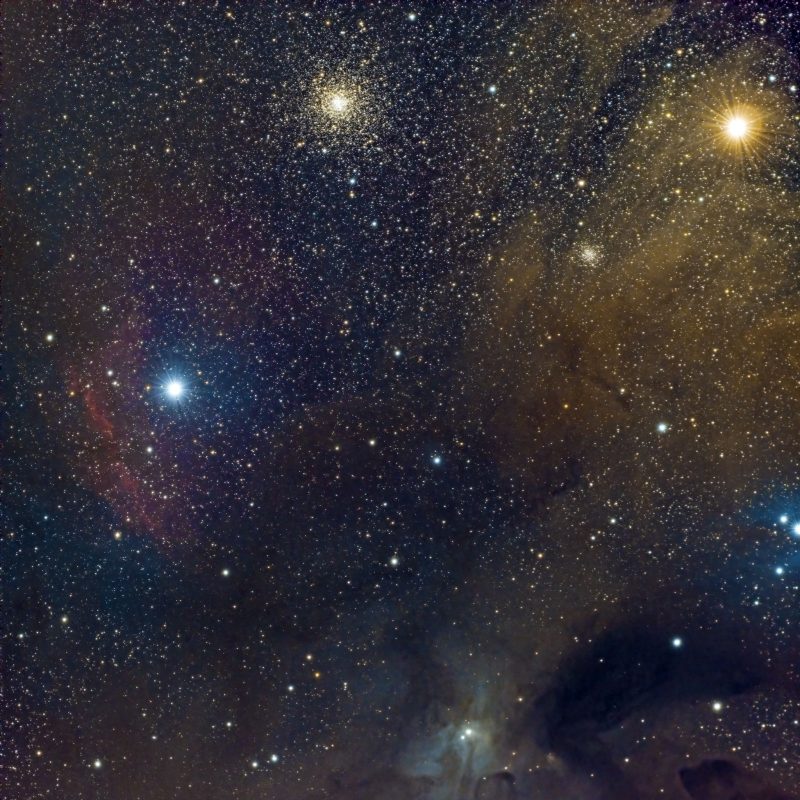 View at EarthSky Community Photos. | Rob Pettengill captured this photo of the Rho Ophiuchi cloud complex – a dark nebula of gas and dust and one of the closest star-forming regions in our Milky Way – on March 20, 2021. He wrote: “Lucy in the Sky with Rho Ophiuchi north down with a southern portion of the Rho Ophiuchi star-forming nebula. Antares in the upper right, M4 globular cluster top middle, Al Niyat left of center frame in this spectacularly colorful area of the southern sky. Taken in the early morning of March 20, from Bad Wolf Ranch in central Texas.” Thanks, Rob!

The Rho Ophiuchi cloud complex is one of the most colorful areas of the night sky and a favorite target for astrophotographers. The photo above shows a portion of the Rho Ophiuchi region, which, in its entirety, stretches 4.5 degrees by 6.5 degrees across the dome of the sky. For reference, the width of the full moon is 1/2 degree. The star Rho Ophiuchi is just out of frame in this image. Across the border from Ophiuchus in the constellation Scorpius, the star Antares shines brightly as a yellow jewel from 550 light-years away. The magnificent globular cluster at top is M4, which is one of the nearest globular clusters to Earth at 7,000 light-years away. The smaller globular cluster between Antares and M4 is named NGC 6144 and is a whopping 33,000 light-years away.

Antares, the brightest star in Scorpius, is nearing the end of its life cycle. The star is beginning to puff off layers of gas, creating its own funeral shroud. To the unaided eye, Antares looks more red than yellow, which is how it earned its name. Antares is considered a rival of reddish Mars, known as Ares in Greek, and Antares was the “Anti-Ares” star.

Al Niyat, or Sigma Scorpii, is the bright bluish star to the left in the above image, with red gas arcing around it. The name Al Niyat is used for two stars, one on each side of Antares. The other Al Niyat is Tau Scorpii and can be seen below Antares in the following image. 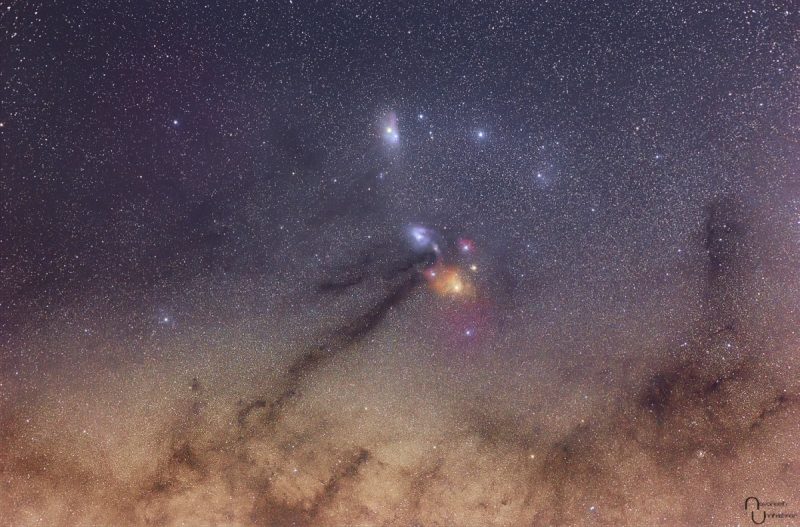 View larger. | The yellowish star within the golden cloud is Antares, and the yellowish cluster to its upper right is M4. Al Niyat (Sigma Scorpii) is just above with the reddish arc over it. In this photo taken on February 28, 2015, Saturn was visiting the stars in Scorpius’ claws near the top. Photo by Navaneeth Unnikrishnan.

The Rho Ophiuchi region lies along the edge of the Milky Way galaxy as seen from Earth. The Northern Hemisphere gets its best view of Ophiuchus, Scorpius and this general region of the Milky Way during summer months. The farther north you are, the lower the constellation is on your horizon. In places such as Seattle or Stockholm, the entire constellation of Scorpius never clears the horizon. 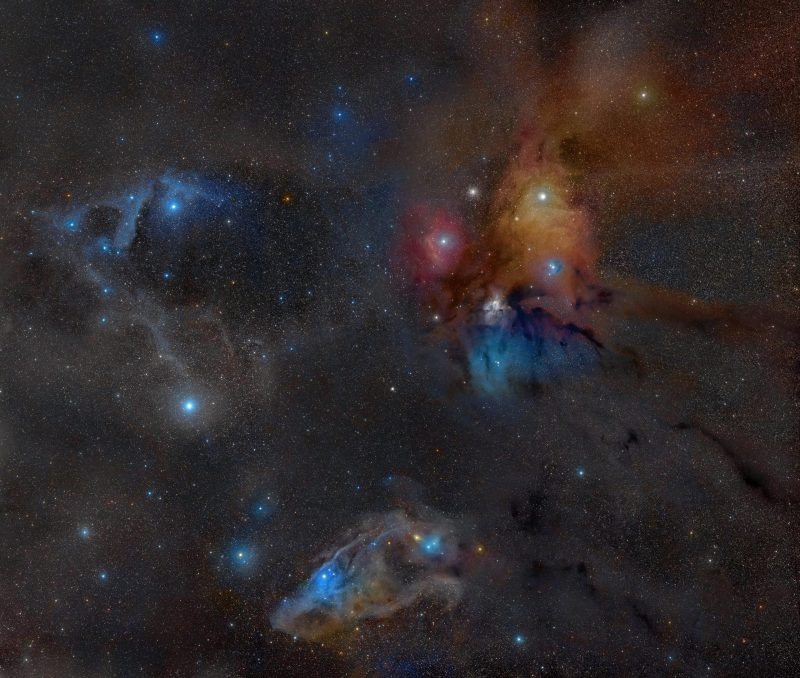 This image bridges the gap between the closeup view at the top of the page and the wide-field view above. The Rho Ophiuchi region is a colorful area of stars, clusters and nebulae. Image via Rogello Bernal Andreo/ Wikimedia.

The actual star Rho Ophiuchi, which gives its name to this region, can be seen in the last image. Just right of center in the image is a star enveloped in a large blue cloud. This is the double star Rho Ophiuchi, a not-particularly bright pair that shines at magnitude 4.6. The star would be two magnitudes brighter if not for the dusty clouds that obscure it. Reflection nebula is the name for the kind of bright bluish halo extending around Rho Ophiuchi. The dark nebulae that streak out around Rho Ophiuchi extend for 100 light-years into Sagittarius to the east. One day these dusty clouds of gas will disappear as bright new stars radiate from this region of space.