M17 is the Omega Nebula

The Omega Nebula – M17 – is visible through binoculars and glorious in a low power telescope. It’s one of our galaxy’s vast star-forming regions. How to find it. 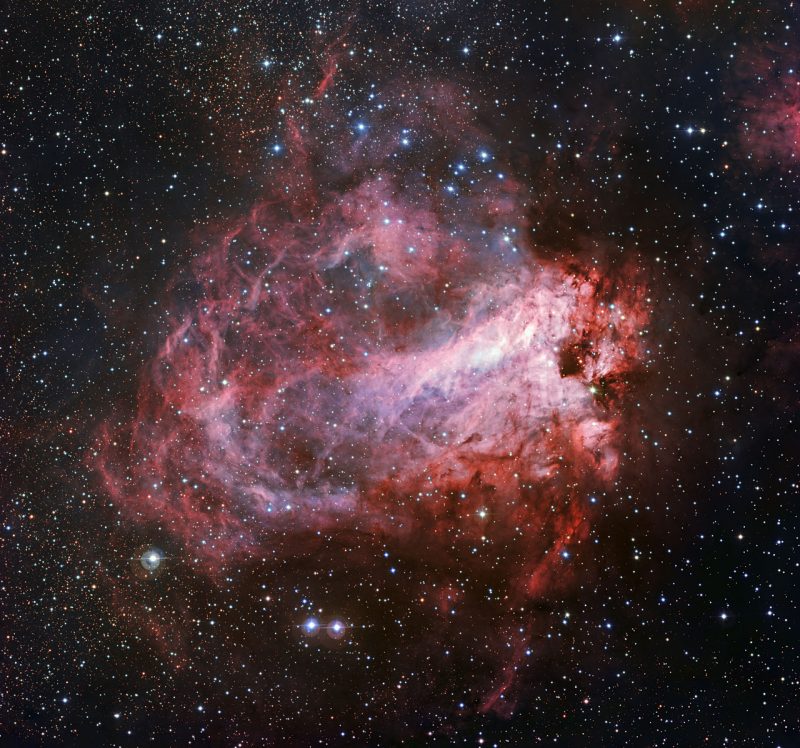 The Wide Field Imager on the 2.2-meter telescope at ESO’s La Silla Observatory in Chile captured this image of the rose-colored star-forming region Messier 17. Image via Messier-objects.com.

Barely visible to the unaided eye on a dark, moonless night, Messier 17 – aka the Omega Nebula – is best seen though binoculars or low power on a telescope. It’s very near another prominent nebula known as Messier 16, the Eagle Nebula, home nebula of the famous Pillars of Creation photograph. These two closely-knit patches of haze readily fit within the same binocular field of view. 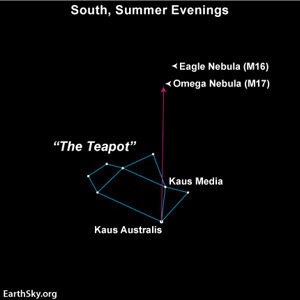 How to star-hop from the Teapot to Messier 16 and Messier 17.

How to see M17. If you want to see deep-sky objects like this one, learn to recognize the constellation Sagittarius the Archer. It’s located in the direction of the center of our Milky Way galaxy; many beautiful star clusters and nebulae can be found in this part of the sky. Luckily, this constellation contains an easy-to-find star pattern, or asterism, in the shape of a teapot. From the legendary Teapot asterism in Sagittarius, it’s fairly easy to star-hop to the Omega Nebula and its companion nebula, M16.

From the Teapot, draw an imaginary line from the star Kaus Austrinus and pass just east (left) of the star Kaus Media to locate M16 and M17. These two nebulae are close together and located about one fist-width above the Teapot. 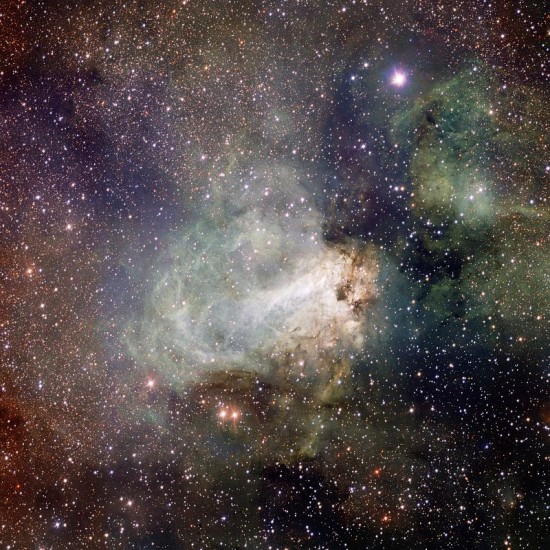 The distance to the M17 Omega Nebula isn’t known with precision. There is little doubt that it lies farther away than the more brilliant Great Orion Nebula, the star-forming nebula that’s visible to the unaided eye in January and February. When you look at either M16 or M17, you’re gazing at deep-sky wonders in the next spiral arm inward: the Sagittarius arm of the Milky Way galaxy.

Messier objects in the direction of the constellation Sagittarius and its Teapot asterism, via Backyard-astro.com.

Competing nebulae. There are many glorious deep-sky objects in this region of the heavens. Two of the most famous patches of nebulosity – M8 and M20 – also vie for your attention, and couple up together within the same binocular field.

Like M16 and M17, this pair resides in the Sagittarius arm and is found by star-hopping from The Teapot. Judge for yourself which pair of stellar nurseries makes the bigger splash!

Bottom line: Barely visible to the unaided eye on a dark, moonless night, the Omega Nebula (Messier 17) is best seen through binoculars, or low power in a telescope.