I waited 46 years to take a photo of the Trifid Nebula, also known as M20.

What is the Trifid Nebula, and where is it in the sky? Located fairly low on the southeastern horizon in northern summer is the constellation Sagittarius. It’s a fairly spread out constellation, located in the vicinity of a band of the Milky Way. From moderately light polluted sites most of the constellation is obscure, however in the heart of Sagittarius beats … a Teapot! The Teapot is one of the most easily recognizable asterisms. Most of its stars are bright, and two, Kaus Astralis and Nunki are the 36th and 53rd brightest stars in the sky, making them easily visible from almost any site. 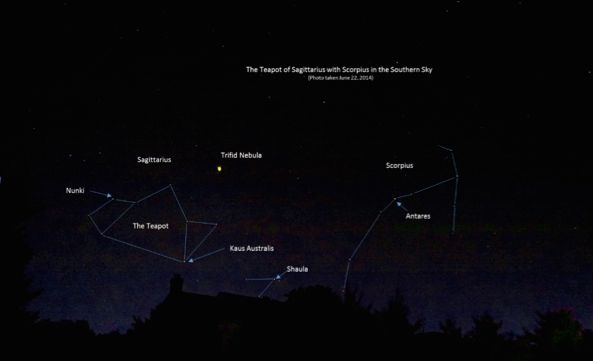 The view to the south in Northern Hemisphere summer. The well-known asterism called the Teapot forms the heart of the constellation Sagittarius, just left of Scorpius, as you stand facing south. Above the spout of the Teapot lies the Trifid Nebula. This image was taken using a cell phone (Windows Phone Lumia 1020). Photo by Martin MacPhee 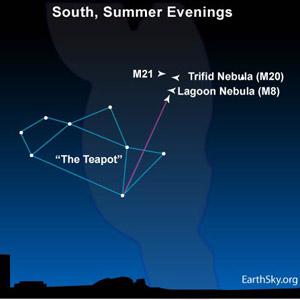 Sagittarius holds many additional beautiful objects, including several nebulas, globular clusters, and a thick band of the Milky Way. One of these, located slightly above and in between the top of the Teapot and its “tip.” If you’re facing south on a summer evening, it’s above and to the right of the Teapot. It’s is one of the most lovely and memorable nebulas in the northern sky – the Trifid Nebula – commonly referred to as M20.

Discovered in 1764 by Charles Messier and entered into his listing of faint, fuzzy things not to be confused with comets (later known as the famous Messier Catalog), the Trifid Nebula is quite a remarkable object. Within it is a stellar nursery where new stars are forming, a star cluster of the recently born stars, a bright red hydrogen emission nebula (HII nebula), a lovely blue reflection nebula, and the interesting dark nebula divided into the three-part structure that gave the nebula its name. In other words, the name Trifid means divided into three lobes. 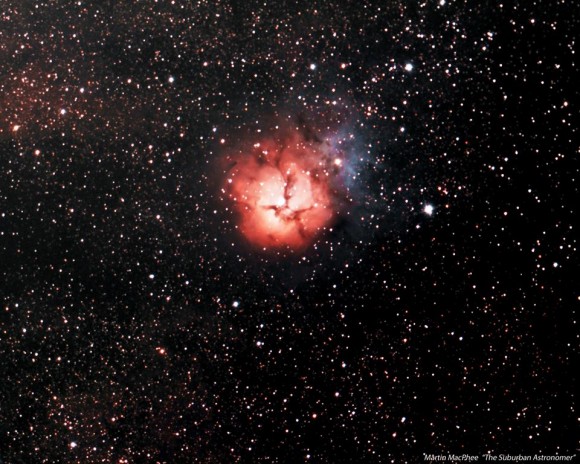 I waited 46 years to take this photo. It’s Trifid Nebula, also known as Messier 20 or M20, is a combination stellar nursery, star cluster and reflection nebula. Photo by Martin MacPhee

The stellar nursery is part of a large glowing HII nebula or region created by the ionization of a large interstellar cloud of hydrogen gas. As this cloud collapsed, it gave rise to a first generation of stars, many of which are now visible as the cluster of stars within the nebula.

In turn, these bright, young stars, most of them Type O, are blasting the HII regions with ultraviolet light, setting the hydrogen gas aglow.

This illumination has caused the nebula to move into another phase of its evolution. The pressure from the radiation has cleared away enough of the gas from the area around the cluster, so little or no star formation is possible within the heart of the nebula anymore. 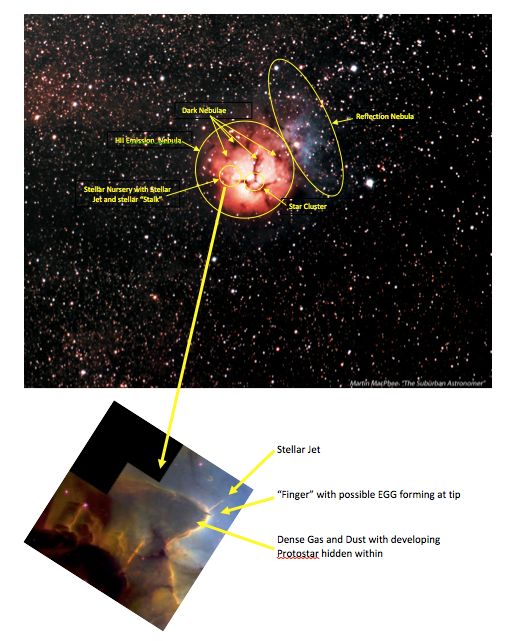 Componets of the Trifid, by Martin MacPhee

However, the dark nebulae that divide the bright red HII emission nebula are dusty collections of dense gas, locations for the production of new protostars. These frequently form at the tips of protrusions from the dark knotted areas of dense gas called Evaporating Gaseous Globules or EGGs. A close-up look at the outlined area by the Hubble Space Telescope revealed a fascinating view of these processes. The dark, finger-like structure pointing towards the central stars is a dense knot of gas and dust that is feeding the growth of what astronomers call a Young Stellar Object embedded within. A Young Stellar Object, or YSO is a nascent star that has evolved past the protostar phase but is not yet mature enough to enter into the main sequence phase of stellar evolution.

Emerging from this structure are two bright, spiky objects. The upper one is a bright wispy stellar jet that has been blasted away from the YSO within the dense material containing it. Such jets are frequently associated with protostars and YSOs, although their exact nature is unclear as yet.

The lower spike is what astronomers call a Stellar Stalk. It resembles the protrusion from which Evaporating Gaseous Globules – the forerunners of protostars, or newly forming stars – emerge.

The structures here in the Trifid Nebula closely resemble those seen in the Eagle Nebula (which is described here), particularly in the famous Pillars of Creation photograph, also taken by the Hubble Space Telescope.

Finally, there is the quite lovely blue reflection nebula seen here on the upper right edge of the HII (red) nebula. Most of the universe is composed of hydrogen and helium and these don’t glow in blue, so when you see blue in the heavens its usually driven by starlight itself.

In this case, the bright light from the stars powering the HII nebula is being scattered and reflected by interstellar dust. Blue light is scattered more efficiently than the rest of the visible spectrum (just as it is in our sky giving us the impression during the day that the heavens are a lovely shade of blue!) and so we see this area as illuminated in this beautiful way.

*Why 46 years? Well back in 1967, the original Star Trek series broadcast a rather forgettable episode called The Alternative Factor. In it, a pair of characters repeatedly crosses from one dimension to another, an event always signified by the repeated flashing of a photo of the Trifid Nebula, which was implied to be an inter-dimensional doorway. As a young boy, I thought that image was both beautiful and beguiling, and vowed to see it for myself one day. Now I, and you, have done so. It was a 46 year mission, much longer than the Enterprise’s original 5 years, but then I’ve always been a little slower than Captain Kirk. A little…

Bottom line: The Trifid Nebula is a stellar nursery, a cluster of recently born stars, a bright red hydrogen emission nebula, a lovely blue reflection nebula, and an interesting dark nebula divided into 3 …

By day, Dr. Martin MacPhee (“the Suburban Astronomer”) is a scientist, medical researcher and inventor. After hours he is an avid photographer, collector of space artifacts and amateur astronomer. Beginning with a 7th birthday gift of a classic small telescope, he has always enjoyed looking at the night sky. Even in his heavily light polluted neighborhood in the Maryland suburbs of Washington D.C., he can often be found playing with his telescopes, watching, learning and taking astrophotographs that he uses to illustrate presentations on space and astronomy he gives at local schools.