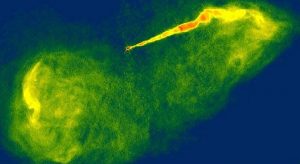 Breakout: How black hole jets punch out of their galaxies

This radio image of the galaxy M 87, taken with the Very Large Array (VLA) radio telescope in February 1989, shows giant bubble-like structures where radio emission is thought to be powered by the jets of subatomic particles coming from the the galaxy’s central black hole. The false colour corresponds to the intensity of the radio energy being emitted by the jet. M 87 is located 50 million light-years away in the constellation Virgo.

Thank you! Your submission has been received!
Oops! Something went wrong while submitting the form.
END_OF_DOCUMENT_TOKEN_TO_BE_REPLACED