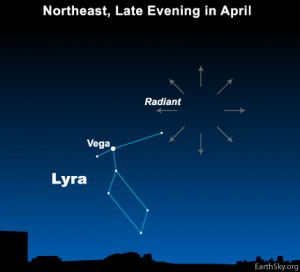 If you trace the paths of these meteors backward on the sky’s dome, you’ll find that they appear to originate from a point in the sky near the the star Vega, the heavens’ 5th brightest star. This is the shower’s radiant point. The radiant point for the Lyrid shower sits just to the right of Vega, which is the brightest star in the constellation Lyra the Harp. It’s from Vega’s constellation Lyra that the Lyrid meteor shower takes its name.

Thank you! Your submission has been received!
Oops! Something went wrong while submitting the form.
END_OF_DOCUMENT_TOKEN_TO_BE_REPLACED