Elnath, the 2nd-brightest star in Taurus, is the closest bright star to the galactic anticenter – the point in space directly opposite our Milky Way’s center.

Gazing at the bright stars Capella, Elnath and Aldebaran, plus the Pleiades star cluster. Image via Chandler Abraham/ FLickr.

You know how, in August, we look toward the center of our Milky Way galaxy? Well, in January and February, we do the opposite. In the evening, we look opposite the galaxy’s center, toward the galactic anticenter and the galaxy’s nearest outer edge. The star Elnath (sometimes also called Alnath) in the constellation Taurus the Bull is the closest bright star on our sky’s dome to the galactic anticenter.

If you extend one end of the V, you come to the star Elnath. Elnath represents the Northern Horn of Taurus the Bull. It’s also called Beta Tauri, because it’s the second-brightest star in Taurus, after Aldebaran, the reddish star that depicts the Bull’s Eye.

Use Orion’s Belt to star-hop to the constellation Taurus and the star Elnath. Image via Janne/ Flickr.

Elnath isn’t quite as bright as Aldebaran. But it’s also part of a noticeable pattern, and it’s blue-white in color.

Can’t find the Face of the Bull? Try finding Orion the Hunter first, an extremely prominent constellation. You can recognize Orion for its Belt – a short straight row of three medium-bright stars.

Draw a line upward through Orion’s Belt to find Aldebaran and the V-shape group of stars outlining the Bull’s Face. Extend this V-shape face outward to locate the two stars marking the tips of the Bull’s horns. The northern and brighter horn star is Elnath. 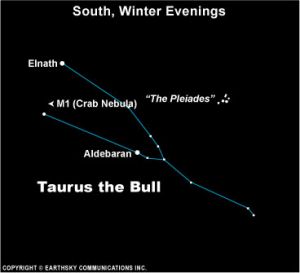 Elnath in Taurus the Bull.

In the Northern Hemisphere, we see Taurus and its stars on winter evenings. Elnath stands opposite the sun around mid-December, at which time this star rises around sunset and sets around sunrise. In January and February, Elnath is already up in the east to south at sunset. By June, Elnath will be lost to the sun’s glare and won’t be seen at all. Excepting June, however, Elnath can be seen for at least part of the night throughout the year.

Elnath stands a bit north of the ecliptic – the annual pathway of the sun in front of the background stars. Because the moon’s path is always near the ecliptic, the moon swings close to Elnath every month. Generally, the moon swings to the south of Elnath. On occasion, the moon swings far enough north so that it occults – covers over – Elnath. This won’t happen again until September 7, 2023, the occultation marking the first of a series of monthly occultations that will last until April 11, 2027. 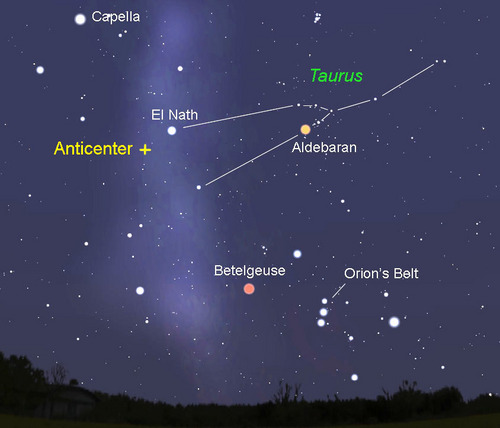 The galactic anticenter lies about 3 degrees to the east of the star Elnath. Check out AstroBob’s article on it. Illustration created by AstroBob with Stellarium.

How to locate the Milky Way’s anticenter. The galactic anticenter lies about 3 degrees to the east of the star Elnath. Three degrees is about the width of your thumb at an arm’s length away. We are not talking about a place here – but just a direction in the sky. Elnath is about 130 light-years away. The outskirts of our galaxy’s disk are many thousands of light-years away.

The galactic anticenter doesn’t actually lie in Elnath’s constellation, Taurus the Bull. Instead, it lies in a neighboring constellation Auriga the Charioteer.

Still, Elnath is the nearest bright star to this point. 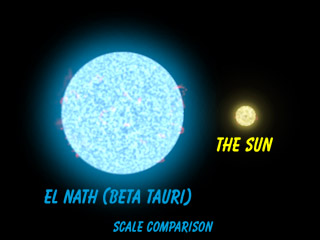 Elnath is larger than our sun. It shines blue-white, while the sun is golden. Image via sciencecenter.net.

According to the star expert Jim Kaler, Elnath has 4.5 times the sun’s mass, and shines with the firepower of 700 suns. 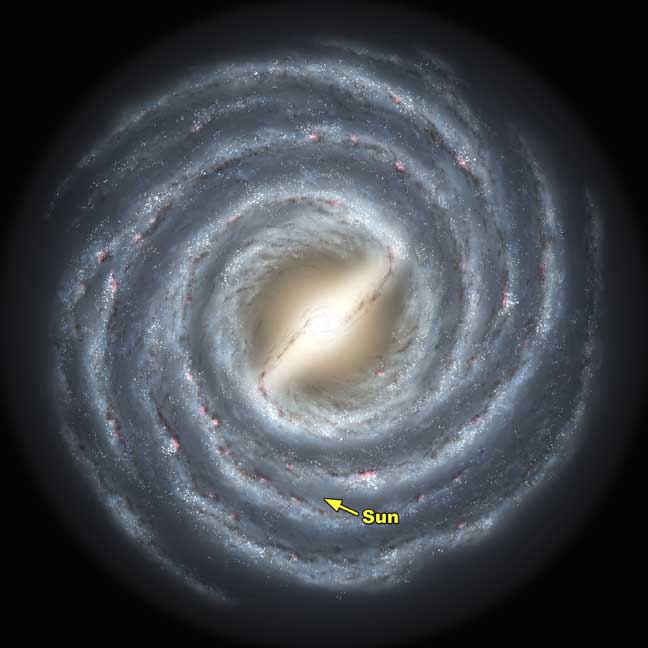 Bottom line: Elnath, sometimes called Alnath, is the second-brightest star in the constellation Taurus the Bull. It marks the Northern Horn of the Bull. It lies just 3 degrees from the galactic anticenter in our sky. It is larger than our sun and shines blue-white in color.