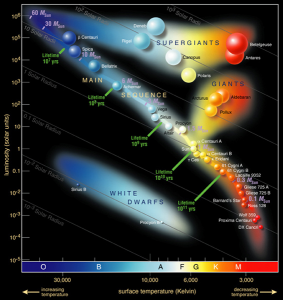 This is the famous Hertzsprung-Russel diagram, which shows the luminosities of stars. See Deneb at the top of the diagram? It is one of the most luminous stars known.

Thank you! Your submission has been received!
Oops! Something went wrong while submitting the form.
END_OF_DOCUMENT_TOKEN_TO_BE_REPLACED