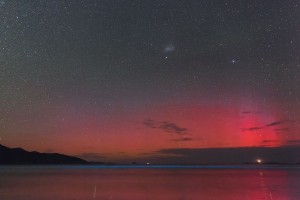 *Night Lights Zoomed* via Colin Legg, who said: Just to keep me on the ball, I had 2 cameras with me on the beach the night of the aurora. They were positioned at the waters edge, however the tide was coming in, so I had to re-position them every 5 or so frames. I’d set one off doing a short timelapse burst then tend the other and back again. All the while trying to watch and enjoy the show. Luckily, both cameras were operating when the aurora went red and the bioluminescence was strongest.

Thank you! Your submission has been received!
Oops! Something went wrong while submitting the form.
END_OF_DOCUMENT_TOKEN_TO_BE_REPLACED