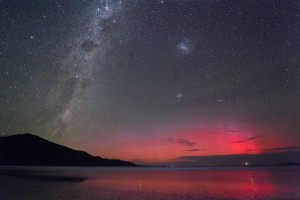 *Night lights* via Colin Legg, who said: Wow!! After a mad dash across Victoria, I was very fortunate to witness my first CME impact early Friday morning. My original site on the SW coast was clouded out, so I went east to stay ahead of the cloud ending up at Wilsons Prom. The CME hit around 1.20 am and the cloud arrived around 3. Lucky!

While the aurora lit up the sky, billions of microorganisms coloured the waves blue. Conditions aurora were similar to my previous trip last Thursday, hot with northerlies, ideal for bioluminescence.

This is the view 10 minutes after impact. I’ll post the impact lights next….quite difference in colour and shape. First, I sleep!

Thank you! Your submission has been received!
Oops! Something went wrong while submitting the form.
END_OF_DOCUMENT_TOKEN_TO_BE_REPLACED