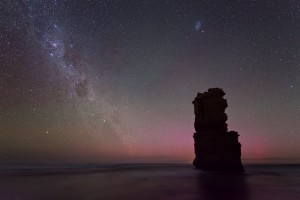 Colin Legg said: I’m slowly making my way back to Perth. It’s difficult to leave the south coast of Victoria, though, with activity on the Sun picking up. It’s been in the doldrums for a couple of months now. Yesterday, the Earth was hit by faster than normal solar wind stream and I caught the very last effects of it just after end of astronomical twilight. The view from 38 degrees south.

Thank you! Your submission has been received!
Oops! Something went wrong while submitting the form.
END_OF_DOCUMENT_TOKEN_TO_BE_REPLACED