Why was Venus so bright in late April and early May 2012?

Venus is at its brightest in late April and early May 2012. It’s so bright it might surprise you. Some will report it as a UFO. But why so bright?

Many people have noticed the brightness of Venus in April 2012! Have you? If not, no matter where you are on Earth, look in the west after sunset. You might agree that Venus – the brightest planet and generally the third-brightest object in the sky after the sun and moon – is exceptionally bright right now. It’s so bright that many will look up and be surprised to see it. Some will report it as a UFO. Why is Venus so bright right now? The fact is that Venus is brightest around late April and early May 2012 for this evening apparition. Astronomers used to call this a greatest brilliancy for Venus. Now they often refer to it as Venus’ greatest illuminated extent, which is much less romantic-sounding, but, granted, more descriptive.

How bright is Venus? It’s so bright that it can withstand some clouds in the sky and still be visible. Moon (upper left) and Venus (lower right) photo taken April 25, 2012 by EarthSky Facebook friend Lyle Evans in Highland, California.

WOW. I have never seen a star as bright as Venus is right now! Northwest Arkansas, 9:55 pm. … a great view of the moon and Venus. W O W

The key to the brightness of Venus now is that it’s about to pass between the Earth and sun. That passage will occur on June 5-6, 2012, and at that time Venus will move from the evening sky to the morning sky.

On June 5-6, 2012, Venus will pass between us and the sun. Artist’s depiction (not to scale) via phschool.com 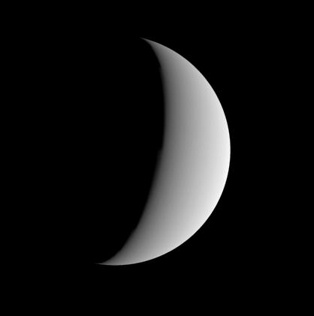 So Venus is more or less on the same side of the solar system as Earth right now. The distance between our two worlds is not as small as it will be in early June, but it’s relatively small in late April and early May. That’s one key to Venus’ brightness now. It’s relatively close to Earth, preparing to pass between us and the sun on June 5-6.

Yet – in what seems like a paradox – a telescope would reveal Venus now as a waning crescent. It looks like a tiny, featureless crescent moon. Because the orbit of Venus lies inside of Earth’s orbit, Venus goes through phases, much like our moon. Surprisingly, Venus’ disk appears only 28% illuminated around now, as seen from Earth. Venus always appears at its brightest when it’s about one-quarter illuminated.

How can Venus be shining at or near peak brightness when we’re seeing only a portion of its lighted hemisphere?

The answer is that – when Venus appears full as seen from Earth – it’s always much farther away, on the far side of the sun from us. That’s the only place it can be in order for its fully lighted disk to be facing our way. Full Venus = more distant Venus = fainter Venus overall.

How bright is Venus now? It’s so bright you can see it even when the sky is still blue, in the moments after sunset. Moon and Venus on April 24, 2012 via EarthSky Facebook friend Randy Granger in Las Cruces, New Mexico.

In the week of April 30, 2012, Venus will shine at its maximum brightness of -4.6 magnitude. How bright is that? That’s about 70 times brighter than Arcturus, one of the brightest stars in all the heavens – now in the eastern part of the sky at nightfall. If you’re in the Northern Hemisphere – where Venus stays up for a few hours after nightfall – it might be possible to notice shadows cast by Venus. You’ll have your best chance to see shadows cast by Venus once the moon leaves the evening sky, starting the second week of May.

So look for Venus in late April and early May 2012. Just go outside after sunset, and look in the direction the sun went down (west). You can’t miss Venus shining there, low in the sky. It will dazzle you!