Why your equinox sun rises and sets due east and west

How is it possible for an equinox sun to rise due east – and set due west – for everyone around the world? How can you visualize it? Illustrations here.

Where does the celestial equator intersect your horizon? No matter what you latitude is, it intersects your horizon at points due east and due west. Read more about how an observer’s latitude affects your visible sky.

The September 2018 equinox happens on September 23 at 1:54 UTC (or September 22 at 8:54 p.m. CDT); translate to your time zone. So as you read this, the due-east equinox sunrise might have already have happened for you. But maybe it’s not too late for you to catch the due-west equinox sunset?

It’s often said that – at each equinox – the sun rises due east and sets due west. And that’s true, no matter where you live on the globe. But why? And how can you visualize it?

Voila. The sun rises due east and sets due west on the day of the equinox, as seen from around the globe. 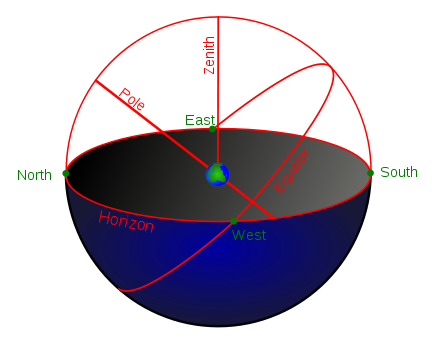 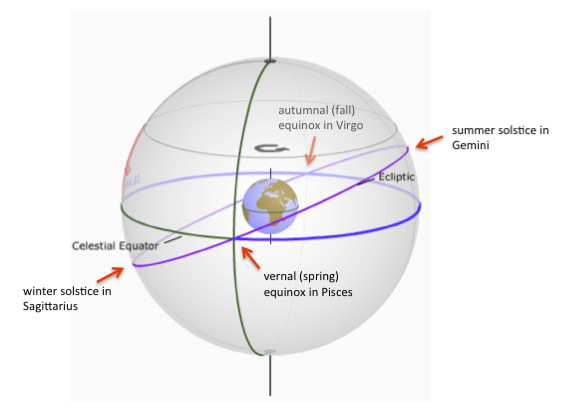 This fact – the sun rising and setting due east and west at every equinox – makes the day of an equinox a good day for finding due east and due west from your yard or other favorite site for watching the sky.

Just go outside around sunset or sunrise and notice the location of the sun on the horizon with respect to familiar landmarks. If you do this, you’ll be able to use those landmarks to find those cardinal directions in the weeks and months ahead, long after Earth has moved on in its orbit around the sun, carrying the sunrise and sunset points southward or northward.

Equatorial sundial by Tom Laidlaw. The north face of an equatorial sundial receives sunshine in spring and summer, and the south face receives it in autumn and winter. On the equinoxes, sunshine should hit neither side of the sundial, but only the edge.

Now let’s think about what an equinox really is. It’s an event that happens on the imaginary dome of Earth’s sky, but each equinox also represents a real point on Earth’s orbit. What happens at every equinox is very real – as real as the sun’s passage across the sky each day and as real as the change of the seasons.

And that’s where we are, in orbit, at this equinox.

We’re midway between the two extremes of the sun’s path in your sky. 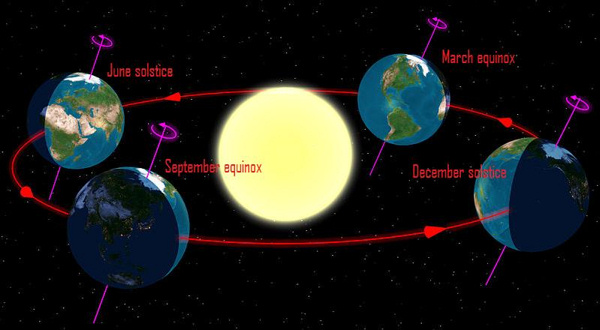 The seasons result from the Earth's rotational axis tilting 23.5 degrees out of perpendicular to the ecliptic - or Earth's orbital plane. 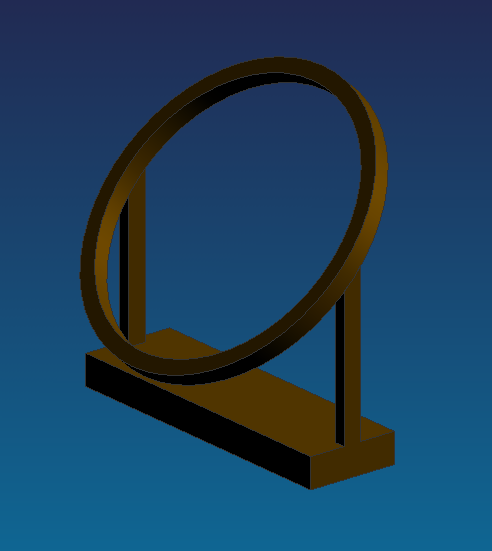 An equatorial ring was used in ancient times in an attempt to determine the equinoxes. The ring plane is set parallel to the plane of the Earth’s equator. If the equinox happened during the daylight hours, the inside of the ring was expected to be completely in shade at the equinox. Image via Wikipedia

Bottom line: The 2018 September equinox comes on September 23 at 1:54 UTC – or September 22 at 8:54 p.m. Central Daylight Time for us in the central U.S. At each equinox, the sun rises due east and sets due west. The diagrams and explanations in this post are meant to help you visualize that.