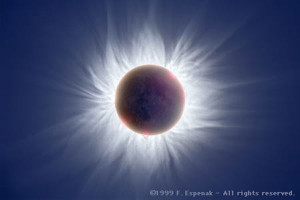 A total solar eclipse in August, 1999 by Fred Espenak. It’s a combination of 22 photographs that were digitally processed to highlight faint features. The outer pictures of the sun’s corona were digitally altered to enhance dim, outlying waves and filaments. The inner pictures of the usually dark moon were enhanced to bring out its faint glow from doubly reflected sunlight. This image was NASA’s Astronomy Picture of the Day for April 8, 2001.

Thank you! Your submission has been received!
Oops! Something went wrong while submitting the form.
END_OF_DOCUMENT_TOKEN_TO_BE_REPLACED