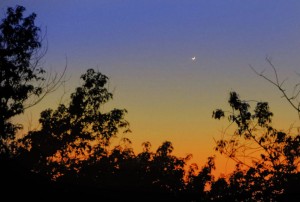 This amazing photo of a crescent Venus, deep in the western twilight, was taken on May 18, 2012 by our friend Duke Marsh from the Louisville Astronomical Society’s Urban Astronomy Center. He says the exposure was short, but camera was zoomed in to about a 500mm focal length, giving the view that you’d see looking through 10X binoculars.

Thank you! Your submission has been received!
Oops! Something went wrong while submitting the form.
END_OF_DOCUMENT_TOKEN_TO_BE_REPLACED