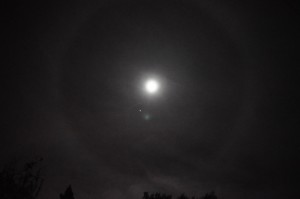 Waning Hunter’s Moon with Jupiter surrounded by a lunar halo in misty SF Bay Area of California – taken just before midnight, Pacific Time, on this very night by EarthSky friend Kathryn Carpenter. Thank you so much, Kathryn. Jupiter is the bright dot near the moon. The smudge near Jupiter is a camera artifact.

Thank you! Your submission has been received!
Oops! Something went wrong while submitting the form.
END_OF_DOCUMENT_TOKEN_TO_BE_REPLACED