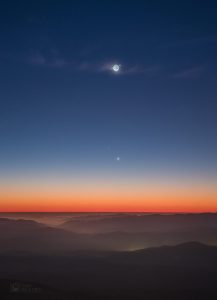 Tonight we witnessed truly amazing scene – Moon and Mercury in close dance just above bright Venus soon after the sunset :) I took an image and you can see how Mercury was actually close to the Moon. At some point I also notices a stripe of light clouds passing by, and I waited few moments until it crossed the Moon producing some nice reflection.

Thank you! Your submission has been received!
Oops! Something went wrong while submitting the form.
END_OF_DOCUMENT_TOKEN_TO_BE_REPLACED