Looking for Venus? It’ll soon come into view in the west after sunset. This video tracks Venus from when it reappears again by mid-July, 2016 … to April, 2017.

With Moon – Venus in the evening sky forty-five minutes after sunset from July 2016 through April 2017 from LarryKoehn on Vimeo.

The brightest planet Venus has been gone from Earth’s sky for a couple of months. That’s because it passed behind the sun from Earth in early June, and it’s been traveling on the far side of the solar system, lost in the sun’s glare to all earthly observers. Photographers using telephoto lenses are now beginning to spot Venus again. By mid-July, 2016, it’ll become visible to the eye once more. Can’t wait? This video tracks Venus from when it reappears again in our evening sky in July, 2016 … all the way to April, 2017. EarthSky friend Larry Koehn of the great website shadowandsubstance.com made this animation, and he wrote:

The most interesting date is on August 27 when Jupiter and Venus will be a little less than 8 arc-minutes apart.

Venus will reach greatest elongation (greatest angular separation from the sun), 47°, on January 12, 2017.

I have also inserted a small view of what you would see if you were to watch Venus through a telescope over the coming months. Venus starts off small and round in July. As the days progress, Venus becomes larger and closer to the Earth, and it goes through various phases of illumination much like the moon. By the time it reaches March 2017, Venus will have a thin crescent phase. Venus will reach inferior conjunction [more or less between the Earth and sun] on March 25, 2017.

The music is from Mark Knopfler from the movie soundtrack Local Hero (Whistle Theme) – highly recommended! 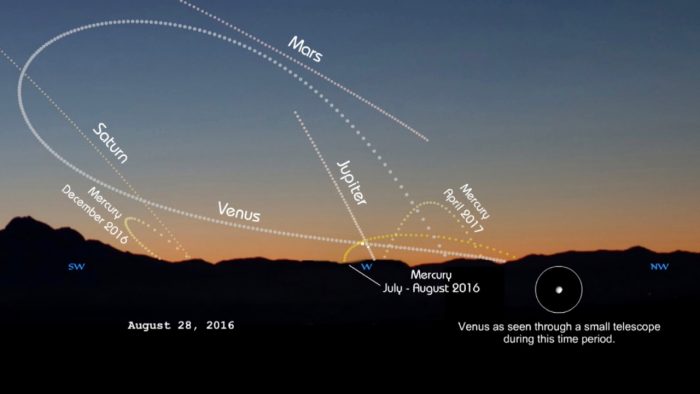 This still from Larry Koehn’s recent video shows Venus and Jupiter in late August, 2016, when these 2 brightest of planets will appear near each other in the west after sunset. Mark your calendar! Visit Larry’s website shadowandsubstance.com

Bottom line: Video animation of the track of Venus (and other planets) from July 2016 to April 2017.