Venus and the bright star Spica have been near each other for some days, and will remain so for a few days longer. We’re now in the middle of the best time to see them near each other in the east before sunup.

Planets in space on November 14, 2018 – the day that Venus and the star Spica (not shown at this scale) appear closest in our sky. Notice that Venus is near our line of sight to the sun now. That’s why we see it so low in the east before sunrise. Chart via Guy Ottewell’s blog.

On November 14, 2018, Venus comes to an apparent halt; that is, it ceases to move westward in right ascension, relatively to the background constellations. The movement is curved, because Venus is in the part of its orbit that slopes northward (to cross the ecliptic on November 22), so the moment of halting in ecliptic longitude – that is, relative to the ecliptic – comes 56 hours later, on November 16.

If the timing had been slightly different, Venus appearing for us a little to the right, it would reach the same direction as Spica and might even occult the great star. What will actually happen is an appulse (a moment of nearest approach) without a conjunction of either kind, right ascension or longitude.

The chart at the top of this post shows what is happening in planetary space.

In that space-based view, you are looking from a viewpoint outward from Earth and 15 degrees north of the ecliptic plane. Shown are the paths of the planets in November, and sight-lines from Earth at the beginning of November 14. Our sightline to Venus is 26 degrees west of our sightline to the sun. This is the elongation at which Venus reaches its stationary moment (the moment mentioned above, when it ceases moving westward relative to the background constellations). The elongation from the sun continues to increase, because the sun is moving eastward for us more rapidly than Venus yet is. Not until January 6, 2019, will Venus be at maximum morning elongation, 47 degrees from the sun, our sightline to it tangent to its orbit.

Venus and Spica have been near each other for some days, and will remain so for a few days longer. The nearest we can get to seeing Venus and Spica closest together is the morning of Wednesday, November 14. Here is what the predawn sky will look like: 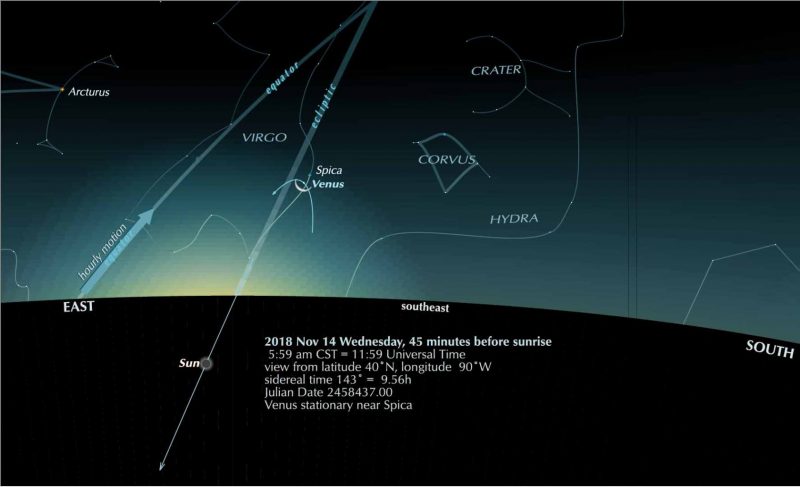 Venus and Spica, November 14, 2018, as seen from about 40 degrees N. latitude on Earth. Chart via Guy Ottewell’s blog.

The arrows through the moving bodies represent, this time, their movements (relative to the starry background) over a span of 30 days, so that you can see here, too, Venus’s sweep toward Spica. The straight arrow for the sun is over the same 30 days, so you can see why it is that, though Venus begins its chase eastward, it is as yet still becoming more separated from the sun.

How can a star be small, a cloud immense?

By the way, watch out for a new product from my website – UniversalWorkshop.com – to be called the Zodiacal Wavy Chart. This is a snippet of it: 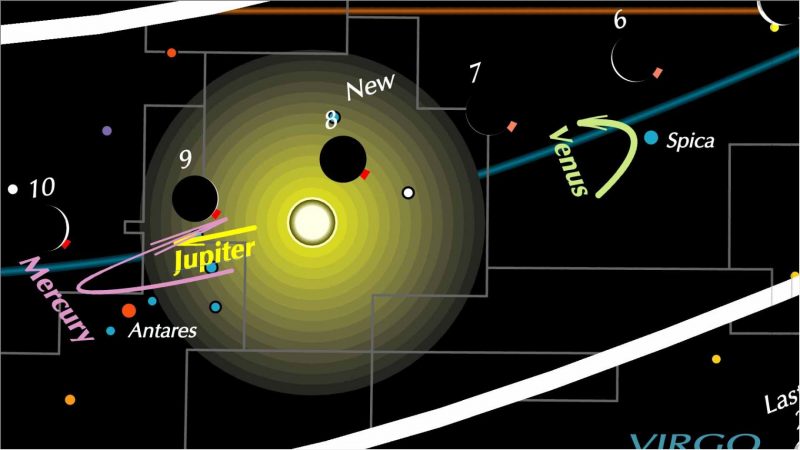 A piece of the all-new Zodiacal Wavy Chart, via Guy Ottewell’s blog.

I’ll let you know when it becomes available, after we’ve solved the means of production.

And there will be a parallel product called Astronomical Calendars Any-Year, a bottomless barrel of information of which this is a snippet:

Together, the Wavy Chart and the Any-Year Calendar will go far to replace my former large and laborious printed books, the Astronomical Calendars, whose print form ended in 2016 but which still can be seen, in part, online.

Charts and lists have their complementary advantages. It was while working on the Wavy Chart for the present year that I noticed the wriggly movement of Venus near to Spica in November. Such motions stand out more readily in a picture than in a table of numbers. The table mentions that Venus becomes “stationary in right ascension,” and then “in longitude,” but it’s the chart that enlivens these dry statements.

Bottom line: Watch for Venus and Spica near each other before sunup in mid-November 2018.