Talk about an awesome Valentine’s Day activity! Go outside and show your sweetie Venus, the planet of love. Astronomer Guy Ottewell provides a chart and more. 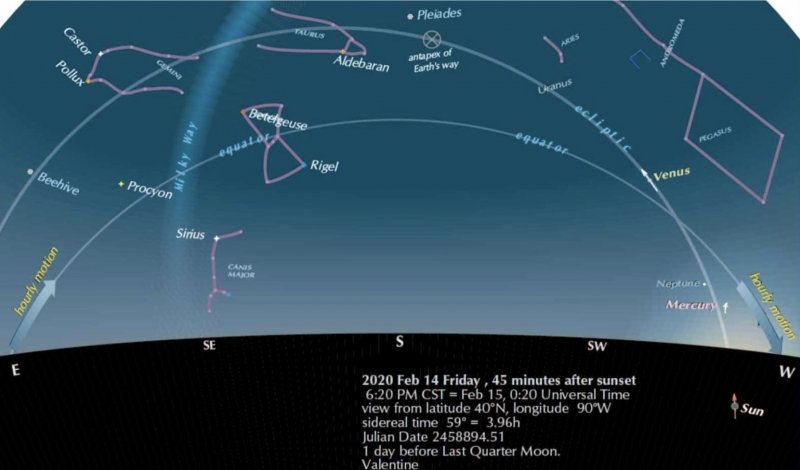 View larger. | Here’s the sky visible throughout much of the Northern Hemisphere on the evening of Valentine’s Day. See Venus in the west? Especially if you have binoculars, you might catch Mercury below it. Southern Hemisphere viewers … your sky is a bit different, but Venus is in the west after sunset for you, too. And you’ll more easily see Mercury! Chart via Guy Ottewell’s blog.

Have a romantic supper on this Valentine’s Day, at a window with a view to the west after sunset! You’ll easily see Venus, named for the goddess of love.

As viewed from above the solar system, Venus is coming around in orbit, nearer to us. It has just come within the distance of 1 astronomical unit, making Venus about the same distance from us right now as the sun. It’s shining more brightly than any star at magnitude -4.4. Venus will slide northward through the ecliptic on February 15, and will reach easternmost elongation – its greatest apparent distance from the sun in the evening sky – on March 24.

Or, should I say, she will? I’ve just started on the happy work of writing the “Goddess” section of my Venus book, having ground through some research on the spacecraft missions to the inhospitable planet.

Those turned out to be more engrossing than I expected. I now appreciate better the work that Clifford Cunningham used to do each year for his “Spaceflight” section in my Astronomical Calendar.

There have been, I find, 43 such missions or attempted missions – 15 of them failed, owing to hardware or software. Many of the earliest, from 1961 onward, were operated by the Soviet Union and called Venera. The last three were all launched by the Japan Aerospace Exploration Agency (JAXA) on May 20, 2010, from one rocket.

They were called Akatsuki (“dawn”), IKAROS (an acronym, but alluding to the rash youth who flew too near to the sun, so that the wax holding his wings together melted), and Shin’en (“profound”).

Akatsuki, the main one, failed to get into Venus orbit as it flew by Venus, and the scientists had to wait while it circulated around the sun for exactly five years until it was in position for a second try; that succeeded, as did the rest of its mission.

IKAROS was the first interplanetary demonstration of the beautiful propulsion method called solar sailing: gentle but accumulating acceleration by the pressure of sunlight. The idea dates back, in a sense, to Kepler’s observation that the gas tails of comets are driven straight outward from the sun. IKAROS consisted of little more than a payload of two cameras and a huge thin sail, around whose edges were 80 liquid crystal cells: by sending commands to change the reflectance of cells, the engineers could control the attitude and direction of the craft without use of fuel. IKAROS flew by Venus two days after Akatsuki’s unintended flyby; its mission, however, was to observe not Venus but interplanetary space, and to learn more about solar sail navigation.

As for Shin’en, it was built by a consortium of students from several universities and carried computers, also built in the universities, to be tested in space. Released like the others from the launching rocket, it did get out of Earth orbit into the heliocentric orbit that should have taken it to Venus. But communication with it was lost within minutes. It may still be visiting Venus, silently.

And three other small student-built non-interplanetary craft were launched along with those three. A colorful fireworks burst from Japan!

Read more: Space mission to Venus and Mercury, from the Planetary Society 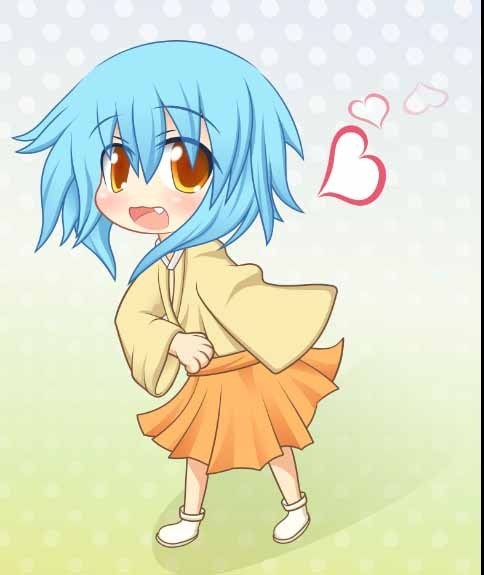 The Japanese vocaloid Hatsune Miku. She has performed at concerts onstage as an animated projection. Her name merges the Japanese words for first (hatsu), sound (ne), and future (miku), thus meaning “the first sound of the future.” Image via Wikipedia. 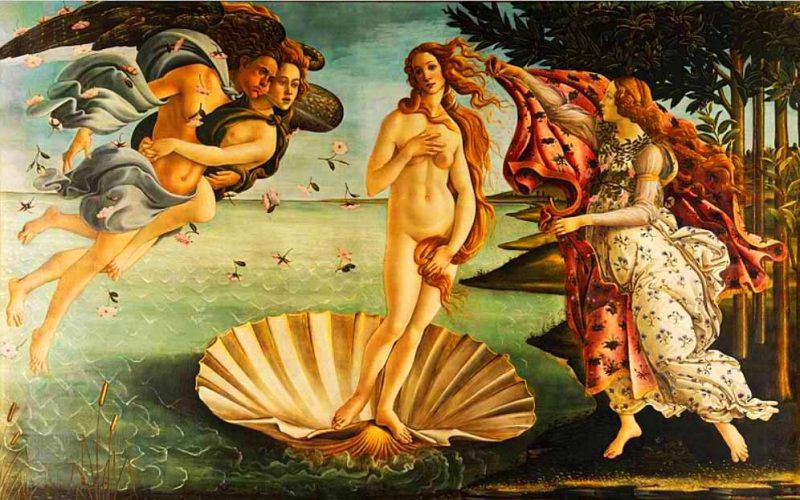 I don’t want to cap your Valentine Day with kitsch. Here is Botticelli’s rendering of Venus, said to have been born from the foam. The Greek word aphros, which means foam, gave Venus her Greek name Aphrodite. She rode a conch shell to the shore of Cythera, the first of the islands that became sacred to her. Image via Italianrenaissance.org/ Guy Ottewell’s blog.

Bottom line: How to see Venus on Valentine’s Day 2020. Plus a word about space missions to Venus.