The stars Shaula and Lesath as heralds of spring

On February mornings, look for the celestial ducks returning to open water on the river of the Milky Way as the stars Shaula and Lesath make their appearance. 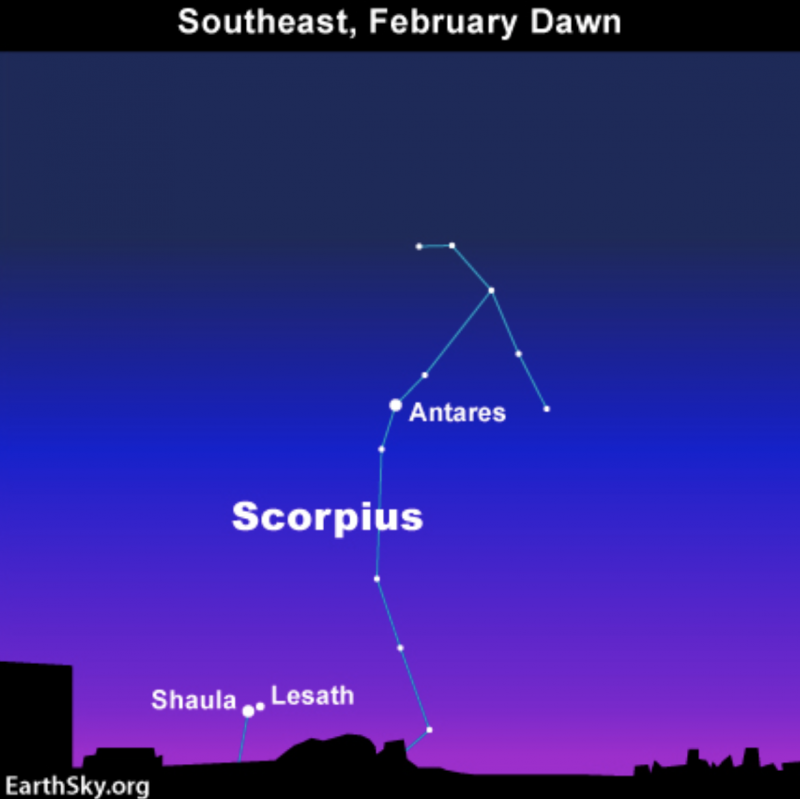 If you’re in the Northern Hemisphere, Shaula and Lesath will come over your southeastern horizon before dawn sometime this month. They’re a hopeful sign that spring is coming.

How do you recognize the coming of spring? Maybe you spot a first returning robin, or tune into news about a groundhog looking for its shadow. For stargazers, one sign of spring is the early-morning sighting of a pretty pair of stars in the constellation Scorpius the Scorpion. Those stars are called Shaula and Lesath, and they’re part of what’s known as the Stinger of the Scorpion, at the end of the Scorpion’s curved Tail.

The Pawnee – once the largest group of people living on the U.S. Central Plains – viewed the sky as a calendar, with different stars foretelling the change of seasons. Many of their seasonal rituals were tied to their observations of stars and planets. The most important of these was the Spring Awakening ceremony, tied to the observation of Shaula and Lesath on cold February mornings. The American anthropologist Gene Weltfish wrote in her 1977 book “The Lost Universe: Pawnee Life and Culture“:

The position of the stars was an important guide to the time when this ceremony should be held. The earth-lodge served as an astronomical observatory and as the priests sat inside at the west, they could observe the stars in certain positions through the smokehole and through the long east-oriented entranceway. They also kept careful watch of the horizon right after sunset and just before dawn to note the order and position of the stars.

The ceremony must be held at exactly the right time of year, when the priest first tracked ‘two small twinkling stars known as the Swimming Ducks in the … horizon near the Milky Way.

When the Swimming Ducks came into view in the southeast – before daybreak in the month of February – the Pawnee recognized that it was time to begin planting ceremonies. The return of the Swimming Ducks to the morning sky signaled the first stirrings of the great plains from hibernation.

Shaula and Lesath’s presence over the horizon was symbolic of waterfowl breaking through the ice. These stars were a sign of hope that spring was on its way. 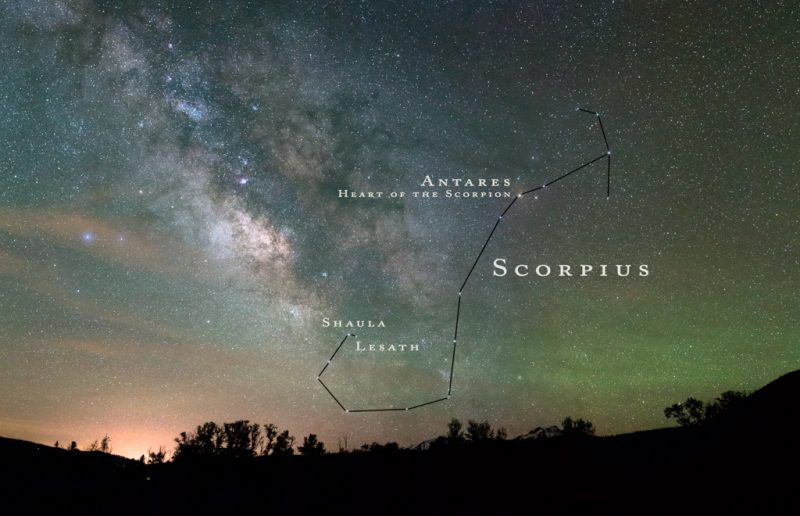 In a dark sky, you can see that the starlit band of the Milky Way runs behind Shaula and Lesath in the Tail of Scorpius. Photo via Daniel McVey.

You can see this harbinger of spring for yourself as Shaula and Lesath come into view at or shortly before dawn. You’ll need a clear, unobstructed view to the south to southeast to spot these stars, flickering by the horizon. If you view the constellation of Scorpius as a tilted J, the pair of stars is found at the end of the J shape. Daybreak may make them difficult to find, but keep looking throughout February, and eventually you’ll spot them low along the horizon.

As we approach the end of winter, Shaula and Lesath will appear higher each morning in the southeast before dawn. Their morning appearance tells us that spring is not far away. 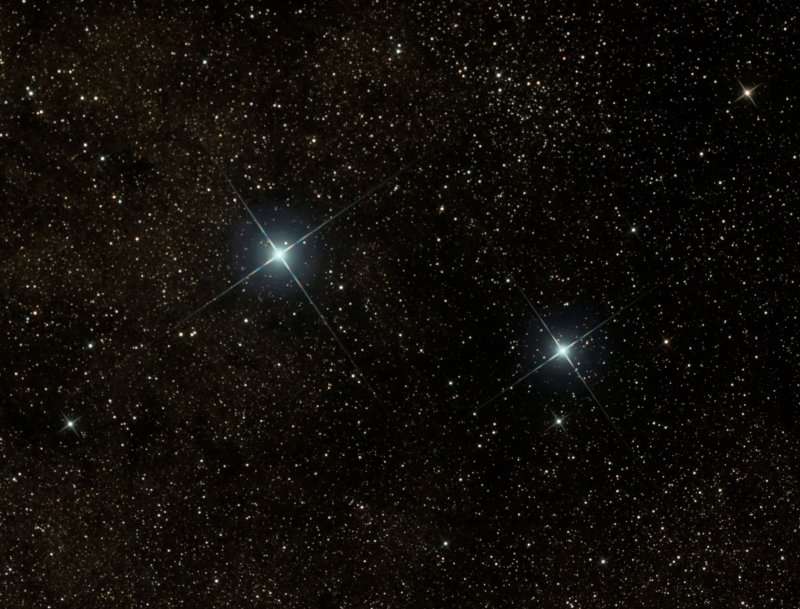 Shaula and Lesath, via John Glossop.

Bottom line: The early Pawnee of the U.S. Central Plains regarded the stars Shaula and Lesath – in the Stinger of Scorpius the Scorpion – as Swimming Ducks. When the Swimming Ducks appeared before dawn in winter, the Pawnee knew spring was near and would begin planting ceremonies. In some respects, these stars as a Pawnee version of Groundhog Day.