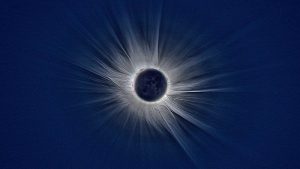 The total phase of the March 20, 2015, solar eclipse as seen from the Svalbard archipelago in the Arctic. This is a composite of short, medium, and long exposures, as no single exposure can capture the huge range of brightness exhibited by the solar corona. The longest exposure in the composite captured the faint illumination of the Moon by earthshine, that is, sunlight reflected off the Earth. No filter was used during the exposures, as totality is about as bright as the full Moon and just as safe to look at. At all other times, though, a safe solar filter is required to observe or photograph the Sun. Credit: Reinhard Wittich

Thank you! Your submission has been received!
Oops! Something went wrong while submitting the form.
END_OF_DOCUMENT_TOKEN_TO_BE_REPLACED