There’s the sky we can see, and, beyond that, a whole universe of objects we can’t see with the eye alone. Guy Ottewell gives you a way to project outward on this Thanksgiving evening. 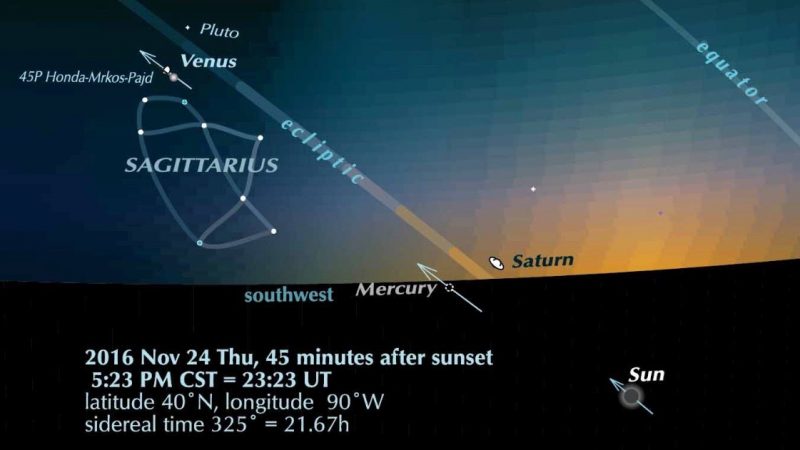 Story and graphics by Guy Ottewell. Re-printed with permission. Read the original here.

Clear above the horizon is Venus, becoming brighter and larger as it swings in toward us.

And Saturn is present, though too low to be observable.

It happens on this date that each of these planets is paired with something else, though only for the mind’s eye. Far in front of Saturn, 3.4 degrees south of it and therefore below the horizon, is Mercury.

And not far behind Venus and only a tenth of a degree south of it is periodic comet Honda-Mrkos-Pajdušáková. It won’t be discernible without a powerful telescope – it’s at magnitude 13, which means 600 or 700 times too faint for the naked eye. We are looking back on it as it comes in to cross our orbit, and it is climbing rapidly in brightness as it rushes toward its Dec. 31 perihelion. Then and in the early days of January it should reach magnitude 7 – still tantalizingly a magnitude below the naked-eye limit. 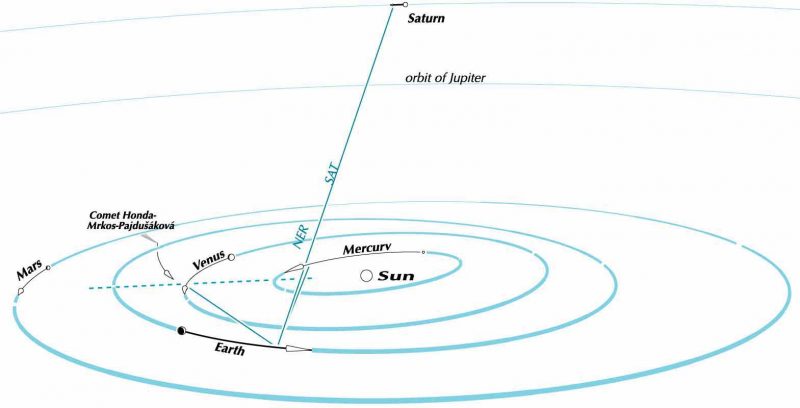 Space view from 15 degrees above the ecliptic plane, showing the paths of the planets and the comet in November 2016, and sightlines from Earth. The Sun is drawn at 5 times true size, Saturn 50, the other planets 300. The dashed line is to the vernal equinox direction. Graphic by Guy Ottewell. Visit his blog Universal Workshop.

Bottom line: If you’re outside walking after a long day indoors … something to think about from Guy Ottewell.

Friday before sunup … See the moon and Jupiter