The Glow of the Lagoon Nebula 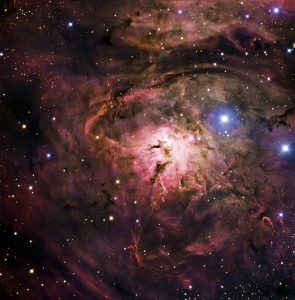 https://www.eso.org/public/images/potw1016a/
Gas and dust condense, beginning the process of creating new stars in this image of Messier 8, also known as the Lagoon Nebula. Located four to five thousand light-years away, in the constellation of Sagittarius (the Archer), the nebula is a giant interstellar cloud, one hundred light-years across. It boasts many large, hot stars, whose ultraviolet radiation sculpts the gas and dust into unusual shapes. Two of these giant stars illuminate the brightest part of the nebula, known as the Hourglass Nebula, a spiralling, funnel-like shape near its centre. Messier 8 is one of the few star-forming nebulae visible to the unaided eye, and was discovered as long ago as 1747, although the full range of colours wasn’t visible until the advent of more powerful telescopes. The Lagoon Nebula derives its name from the wide lagoon-shaped dark lane located in the middle of the nebula that divides it into two glowing sections. This image combines observations performed through three different filters (B, V, R) with the 1.5-metre Danish telescope at the ESO La Silla Observatory in Chile.

Thank you! Your submission has been received!
Oops! Something went wrong while submitting the form.
END_OF_DOCUMENT_TOKEN_TO_BE_REPLACED