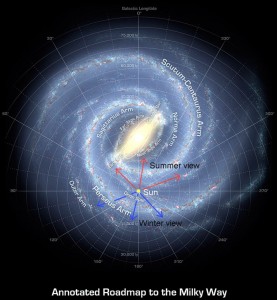 On June, July and August evenings, we look toward the galaxy’s center as indicated by the red arrows. On December, January and February evenings, we look away from the center, as indicated by the blue arrows. Other features, including our galaxy’s primary spiral arms and the sun’s location in the Orion Spur, are also shown. Artist’s illustration via NASA/JPL/Caltech/R.Hurt

Thank you! Your submission has been received!
Oops! Something went wrong while submitting the form.
END_OF_DOCUMENT_TOKEN_TO_BE_REPLACED