Time to watch for spring fireballs

The rate of fireballs – or bright meteors – has been observed to go up in the Northern Hemisphere by as much as 30% from February through April. Will it this year? 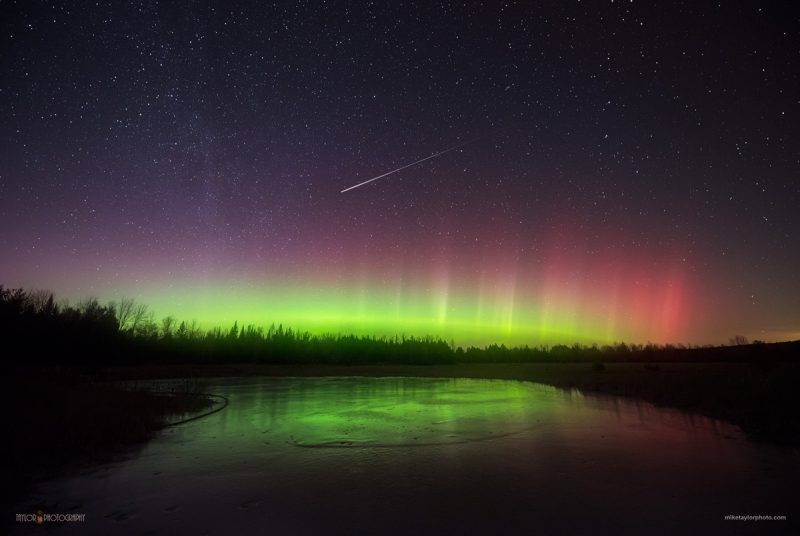 View larger. | 2016 was reportedly a good year for spring fireballs. Mike Taylor in Maine caught this one on March 6 of that year, against the backdrop of an aurora.

We’re now in what some astronomers call the meteor drought time of year. The next major meteor shower won’t come until April, with the Lyrids. But – if you watch, and especially if you’re under dark skies – you might you might spot a fireball, or especially bright meteor, from now through April. These are the legendary spring fireballs. In his Meteor Activity Outlook for February 2-8, 2019, Robert Lunsford of the American Meteor Society (AMS) wrote:

… a bright fireball may light up the sky. February is the start of the evening fireball season, when an abundance of fireballs seems to occur. This lasts well into April as seen from the Northern Hemisphere. Sporadic rates are near maximum for those viewing from the Southern Hemisphere. There are no strong showers this month but sporadic rates are well in excess of 10 per hour as seen from mid-southern latitudes.

NASA meteor expert Bill Cooke got us all hooked on spring fireballs, beginning in 2011, when he reported:

Spring is fireball season. For reasons we don’t fully understand, the rate of bright meteors climbs during the weeks around the vernal equinox.

NASA said in 2011 that the appearance rate of fireballs can increase by 10-30 percent in the weeks around the March equinox. And indeed 2016 was a good year for spring fireballs, according to a March 9, 2016, article by Vincent Perlerin of the American Meteor Society. Perlerin reported on six major fireball events over the U.S. between March 2 and March 8, 2016.

In 2017, Robert Lunsford of the AMS told EarthSky that the time to watch for spring fireballs comes a month or so before the vernal equinox (around March 20-21 each year). He wrote:

[Spring fireballs] can be easily picked out from the list of events in our fireball table. I believe that there is no doubting the existence of these fireballs. They are the result of the antapex radiant being located at its highest point of the year in the the evening sky. I’m certain the same thing occurs in the Southern Hemisphere during the months of August through October. Unfortunately there are far fewer people to report them from down there. The overall results of the AMS fireball totals since 2005 display a spike in February, a month normally known for low meteor rates.

So spring fireballs – from February to April in the Northern Hemisphere and perhaps also from August to October in the Southern Hemisphere – may be caused by the fact that the antapex radiant lies highest above the horizon this time of year during the evening hours at these times. What is the antapex radiant? You might have heard the term apex of the sun’s way to describe the direction our sun is moving through space, with respect to the stars. Our sun and family of planets travel more or less toward the star Vega in the constellation Lyra; and that is the apex of the sun’s way. The antapex is the direction in space opposite the apex of the sun’s way; it’s the direction opposite our sun’s motion through space. 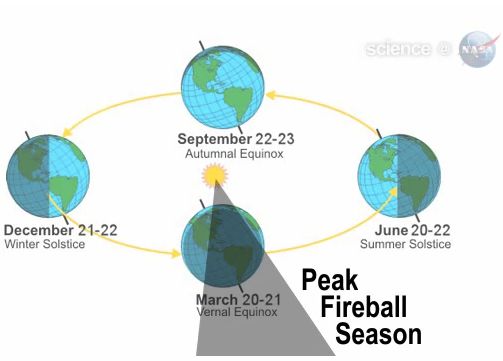 The reason [for spring fireballs] is still unknown, but one hypothesis is that more space debris litters this section of Earth’s orbit.

Meteors are debris from space. They typically range in size from a few feet (about a meter) to smaller than a grain of sand. As these objects enter Earth’s atmosphere, they vaporize due to friction with the air.

NASA scientists at one time set up a network of ground cameras in order to track and record video of meteors flaming overhead. The footage could be used to pinpoint a meteor’s orbit and origin. The video below – which is from 2011 – explains more:

Speaking of meteors, while spring might be the best time to see fireballs, major meteor showers – sometimes featuring a meteor or more every minute – take place throughout most of the year, with a break between the Quadrantids in early January and April’s Lyrid meteor shower.

The next regularly-occurring major meteor shower will be the Lyrids in April. In 2019, their expected peak is the morning of April 23, unfortunately under the light of a bright waning gibbous moon.

Bottom line: In recent years, there’s been a discussion of the possibility of a spring fireball season. Apparently, in some years, the rate of fireballs – or bright meteors – in the Northern Hemisphere has been observed to increase by as much as 30 percent from February through April.

Click here to see the dates of the major meteor showers.