Astronomer Guy Ottewell has developed a novel way of picturing ourselves riding on Earth, orbiting the sun. See those past-and-future Earths as we look backward at the old year – and forward into the new – here. 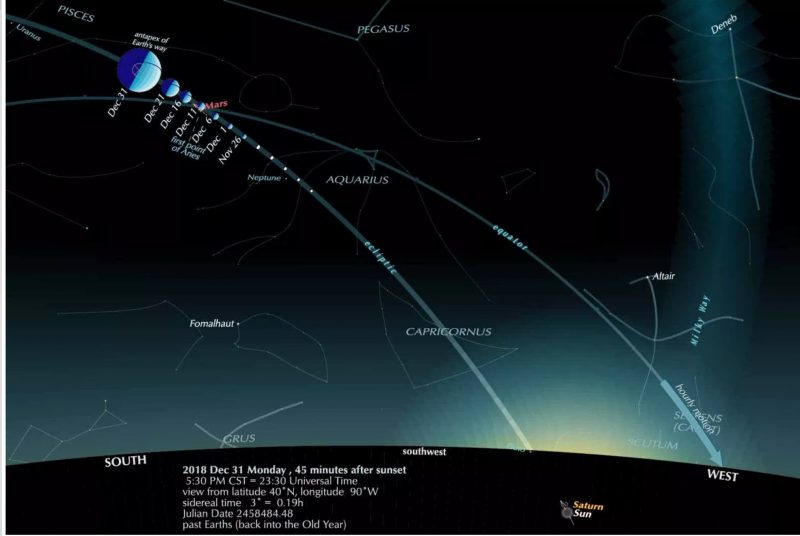 View larger.| As evening falls, when you look along the ecliptic (sun’s path), approximately at its zenith (highest point in your sky), you’re looking backward along Earth’s orbit. In this illustration, the blue spheres along the ecliptic are “past Earths” showing where Earth was in its orbit an hour ago (largest Earth), and 10 days ago, 20 days ago, 30 days ago, and so on. Chart via Guy Ottewell.

The chart above is the sky scene on the last evening of 2018.

Below – a happy New Year to you! – is the view in the opposite eastward direction, Earth’s forward direction in orbit around the sun, on the following morning, the morning of the first day of 2019. 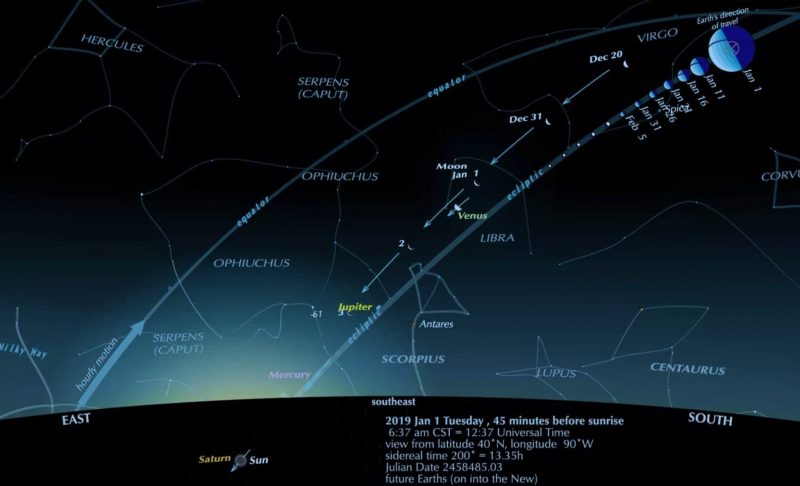 Included again in these pictures are my imaginary Earths as seen from our actual Earth. They are at other points in Earth’s orbit, and serve to show where in space that orbit is. To repeat our simile, it is as if the orbit is a steel ring around the sun and the Earths are like beads sliding along it.

In each picture, the nearest imaginary Earth is only an hour away. They’re an hour into the past in the evening picture, and an hour ahead in the morning picture. In each picture, Earth’s size is shown at true scale. The others are 10 days away, 20 days, 30 days, and so on. These older Earths are exaggerated 100 times in size. That’s how quickly an Earth – days away – dwindles in size, because the orbit (and space in general) is relatively so vast.

Pairing these pictures for the turn of the year was the brilliant suggestion of Deborah Byrd, creator of the popular EarthSky website. I saw it had to be done: it has us looking backward at the old year, forward into the new. As night falls we are on the trailing side of Earth and we look back over the route we have traveled into December. At dawn, on Earth’s prow, we look forward along the curve of our future journey, out of winter into the spring and summer of the coming year.

There are the usual details in the background of the pictures, such as Mars and Neptune out beyond the past-Earths of December, and, in the morning sky of January, an array of the brightest planets, passing each other and the red star Antares and being passed by the waning moon – as shown also in this detail from our Zodiac Wavy Charts for 2019: 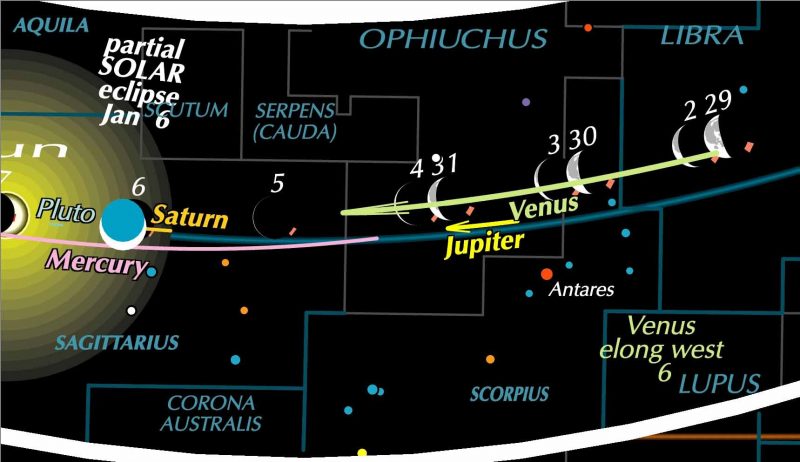 A portion of 2019’s Zodiac Wavy Chart, via Guy Ottewell. 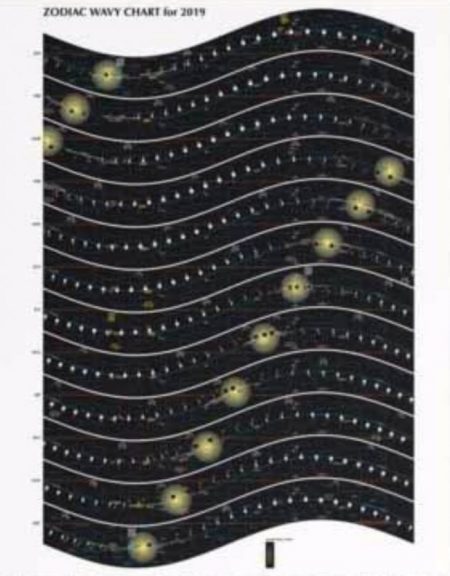 The imaginary Earths are superimposed on the ecliptic, since that marks the plane of our orbit. But the line of the ecliptic is only a line on the map of the sky; in real space, the nearer Earths curl in toward us.

Yet there’s something of a struggle to understand that curling-in. The nearest past or future Earth appears highest in the evening or morning sky. Is the sequence really going to curl right in to where we are? Yes. If we drew Earths any nearer, only half an hour or only minutes away, they would swell enormously, also be shifted southward by parallax, and would end by hitting and consuming the Earth we stand on – but not symmetrically: if the nearest past Earth could put on speed and catch up with us, its front would make first contact with the rearmost point of the real Earth, on the equator. This, in the evening sky, is down over the horizon to the left, because the scene is set for latitude 40 degrees north.

So I thought of adding a scene as for a place on the equator. But there is something better.

Daniel Cummings of the blog StarInAStar had the idea of visualizing Earth’s orbit as a ring in space, visible from Earth. That was what made me think of the past-and-future Earths as a way of making that ring visible. But I still hadn’t grasped his full idea, which, as he explains, really necessitates seeing the ring as a whole. This means seeing it not after dark but at noon, with the sun at its highest.

Adapting my program to let it show this wasn’t easy, because I had built it basically to show the night sky, and added to it the imaginary Earths in the evening sky or the morning sky, but not both together. But I think I’ve now got close to his conception. 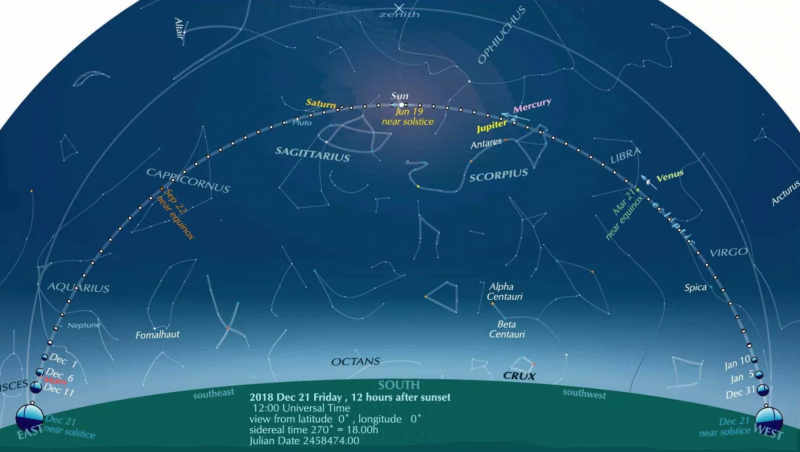 View larger. | Earth’s orbit as a ring in space, visible from Earth, with past-and-future Earths shown on the day of a December solstice, via Daniel Cummings and Guy Ottewell.

Here is the sky at midday, not as seen from a northern location but, for simplicity, from latitude and longitude zero, on the equator. Also, the scene is drawn not for the turn of the calendar year but for the day of the solstice, December 21, so that it is symmetrical. We see that steel ring, Earth’s orbit, in its entirety. The sun, at the top, is in front of the farthest point of the ring; we are at the nearest point. You can call the sun the gem on the ring, and we are at the clasp!

The imaginary Earths appear all around the ring. They start from behind the sun. They approach us, getting larger, and end with the nearest, an hour ago, on the east point of the horizon. Then there’s the Earth of this moment, with us on it. Then the nearest future Earth, an hour ahead, is over at the west point on the horizon (about to set as the real Earth rolls upward), and the other future Earths reel away to their destination behind the sun.

Because this picture is from our solstice viewpoint, it is symmetrical: the past Earth of last September’s equinox is at the same distance as the future Earth at next March’s equinox. (The Earths marking those events are not precisely at their dates, September 23, 2018, and March 20, 2019, because the Earths are at 10-day intervals.)

I make the horizon into a convex curve so as to remind you that we are on a spherical planet – it’s done simply by setting the center of the projection 10 degrees below the horizon. In this projection, the trail of past and future Earths looks like a semicircle. Yet the orbit of Earth is a ring – a circle (or very nearly so). Then how come the picture makes it look like a semicircle with ends wide apart?

If you look at something circular, such as a pond, from an oblique viewpoint, it appears not as a circle but as an ellipse. Actually even that isn’t quite true, and gets less so the nearer you are to the pond: the ellipse is distorted, the nearer part of it swollen. This effect is rather well shown in the last of the space-sphere pictures in my Astronomical Companion, purporting to show the outer limit of the observable universe, in which for paradoxical effect the eye is brought close to the sphere. And in our sky picture now, the nearest part of the ring is extremely near – in fact, we are on it – and that is why it appears as wide as the whole ring.

The sun is the center of this ring, and the far side of the ring, at the June solstice, is relatively so distant that its width seems to have shrunk to nothing behind the sun.

We jump backward into space to see the ring of Earth’s orbit as a whole. From this huge distance (90 astronomical units or sun-Earth distances) the orbit does appear indistinguishable from an ellipse.

Shown are the paths of the planets in December 2018 and January 2019, and sightlines from Earth to the sun at the December 21 solstice (blue) and the divide between the years (white). The sightline at the solstice is at a right angle to the March or vernal equinox direction.

Ring in the new! We hope 2019 will be a better year for you and for all creatures great and small.

Bottom line: A way of picturing ourselves moving in Earth’s orbit around the sun as we look backward at the old year – and forward into the new – here.