Posted by Guy Ottewell in Astronomy Essentials | May 10, 2020

The planets Jupiter and Saturn are exceedingly near each other now on the sky’s dome, heading for a 20-year conjunction later this year. See them with the moon on May 12!

On the morning of Tuesday, May 12, 2020, comes a concentration of three bright bodies within a circle less than 5 degrees wide.

Jupiter has been catching up with Saturn, and now, when the moon pays its monthly visit, they are close enough to form this trio. It is at its tightest on May 12 at 14:00 UTC, which is four or more hours earlier by American clocks. Translate UTC to your time zone. So, for Europe, Africa and the Americas, the nearest time for viewing the trio is the morning of May 12.

The centers of the three will fit within a circle of diameter 4.7 degrees. This is as seen from the center of the Earth; from my northern latitude in the U.K., the moon, which descended through the ecliptic on May 10, will appear farther south, so that the gathering appears less tight. In the picture at the top of this post, the moon is drawn – at twice its real size – in the positions where it is seen from the location, but the arrows between moon dates are where the moon would be seen from Earth’s center. 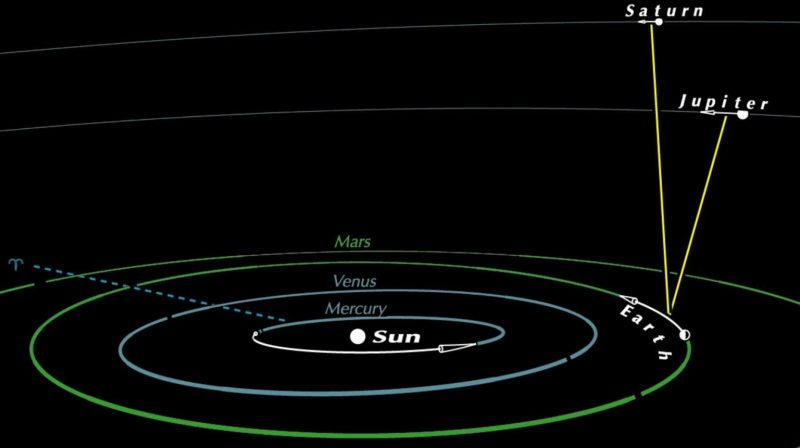 This space view is from 15 degrees north of the ecliptic plane, and shows the paths of Earth, Jupiter, and Saturn in May 2020, with sightlines from Earth to those planets at May 12 at 14:00 UTC. The dashed line indicates the vernal equinox direction.

After this trio event, the moon will reach its last quarter position on May 14 (14:00 UTC), near the spot marked “Earth’s direction of travel” in the top diagram. The last quarter moon, 90 degrees west of the sun, is crossing our orbit ahead of us.

And, because Earth is starting to overtake the two planets on the inside, both go into apparent retrograde motion, Saturn on May 11, Jupiter on May 14. One result is that there comes a quasi-conjunction, a moment when the angular distance between them is at a minimum before opening back out: this will be on May 18, when Jupiter will be 4.7 degrees west of Saturn.

To add to the complexity, little Pluto appears close by but in the farther background. Read more: Jupiter gives us Pluto in 2020

Quite a geometric tangle. To clarify it to myself, I had to trace the to-and-fro movements of Jupiter and Saturn from month to month down my Zodiac Wavy Chart for 2020:

The two giants will continue to retrograde, through their oppositions on July 14 (Jupiter) and 20 (Saturn); will resume forward motion on Sep. 12 (Jupiter) and 29 (Saturn).

Their 20-year conjunction will come on November 2, 2020, as seen from the sun, and on December 21 as seen from Earth.

Bottom line: The planets Jupiter and Saturn are exceedingly near each other now on the sky’s dome, heading for a 20-year conjunction later this year. See them with the moon on May 12!