Here’s something you – or your kids – might have noticed: When you’re in a moving car, earthly objects get left behind, but the moon seems to follow. Why? 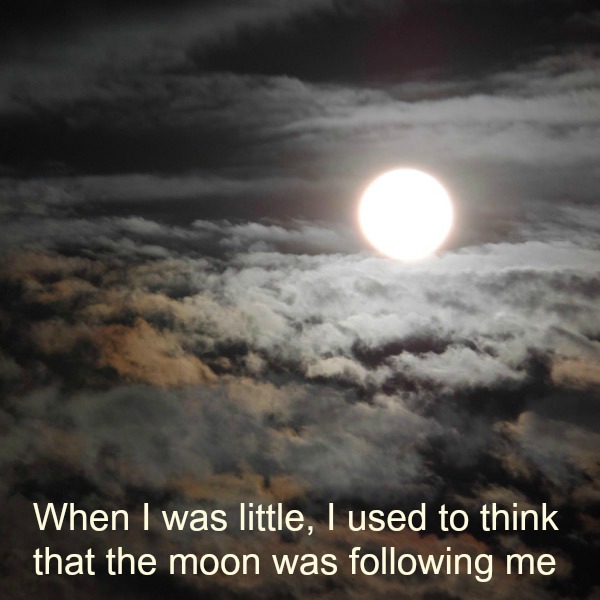 Why does the moon seem to follow you, when you’re in a car? The simple answer is … because the moon is so relatively distant, compared to the objects around you on Earth.

Suppose you’re in a car, and you’re looking out the window. You see lots of motion in the landscape as you pass trees, buildings, and signs. Let’s say you’re driving by a house. First you see it in front of the car, then to the side of the car – then it’s behind you.

That’s how your visual system knows that you’re moving by the house.

But the moon and stars are very distant. When we’re gazing at them from a moving car, we don’t have the ordinary clues in our environment to tell our visual system what’s going on. We don’t see the angle on the moon or stars change – we don’t see them from the front, then the side, then the back.

Also – when we’re moving along in a car – our brains automatically compare the distant moon and stars to that cluttered foreground sweeping past. Meanwhile, because the moon and stars are so far away, they seem to stay in one spot, and it can seem as if these objects in space are moving right along with you.

This phenomenon, by the way, is responsible for many of the UFO sightings around the world.

Here’s a video for kids explaining why the moon seems to follow:

For a page of kids’ writings about the moon following them, click here.

Bottom line: If you’ve noticed that, when you’re in a moving car, the moon seems to follow you, it’s because the moon is so distant relative to earthly objects.