Now is the time to see Mercury

For Northern Hemisphere skywatchers, it’s the best evening apparition of Mercury in 2019. Now is the best time to look. 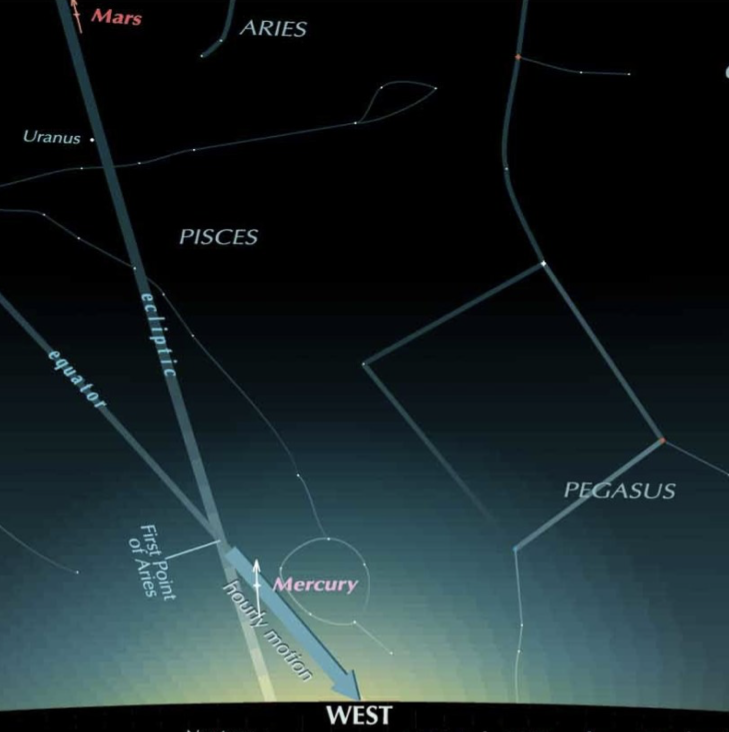 View larger. | At its farthest from the sun in our evening sky in late February and early March 2019, Mercury stands above the sunset point. Notice Mars, too! Chart via Guy Ottewell.

Mercury now stands farthest out from the sun in the evening sky. Technically, we say that the planet is at its greatest eastward elongation. The extreme is reached on February 27, 2019, at 01:00 UTC. This is back on February 26 by American clocks – 8 p.m. for the Eastern time zone, 7 p.m. for the Central, and so on. The precise clock time is not so important. What’s important is that you look for the elusive little planet in the west shortly after sunset on these late February 2019 evenings, if the low sky is clear.

On the chart above, the arrows through Mercury and Mars show their movement (against the starry background) from two days before to two days after February 26.

The broad arrow on the celestial equator shows how far the sky appears to rotate in one hour. So Mercury will be down to the horizon in less than an hour after sunset, as seen from the latitude of this map (40 degrees north latitude).

Now look at the chart below, which shows Mercury’s elongations from the sun – the best times to view the planet – for all of 2019.

You can see that for February 27 the elongation is not particularly great (18.1 degrees). However, the thick curve almost fits up to the gray area. That is, the sunset altitude, for Northern Hemisphere observers, is almost as great as the elongation.

The reason for this favorable geometry is clear in the sky scene at the top of this post. Mercury’s travel away from the sun appears vertical with respect to the horizon. It roughly follows the ecliptic, or sun’s path across our sky, which at this season – for temperate latitude in the Northern Hemisphere – is nearly vertical. And it also happens that Mercury, in this part of its orbit, is sloping slightly northward from the ecliptic.

It’s said that Copernicus, who made us understand that the planets revolve around the sun, was never able to see little Mercury from misty Poland. Perhaps you can research this for me and tell us whether it is just a Polish joke or an urban-pollution myth.

Bottom line: For the Northern Hemisphere, the best evening apparition of Mercury in 2019 comes in late February. Now is the time to look.