Mars starts to rise before midnight 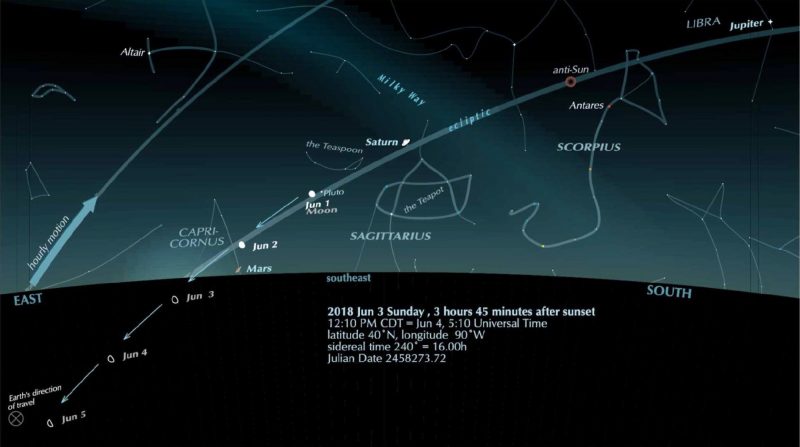 Mars is beginning to rise before midnight according to our picture, above, which is of the middle of the night between Sunday and Monday. This chart, which is set for the middle of the U.S. – latitude 40 north, longitude 90 west – shows Mars one degree above the eastern horizon at ten minutes past midnight. The situation is much the time across the globe, although Mars’ exact rising time depends on how far north or south you are on Earth, and on how far east or west you are in your own time zone.

Also, the midnight rising of Mars is according to clocks now on the summer regime of daylight saving time. They are one hour fast, pretending that 11 o’clock is “12.”

Here is part of my rising-and-setting graph for 2018:

View larger. | A portion of 2018’s rising-and-setting graph – showing May, June and July – via Guy Ottewell.

The lavender vertical line near the right represents midnight; the slanting red curve labeled as Mars rises crossed it as long ago as May 12. If it were not for daylight saving time, Mars would have been rising before midnight for more than 10 days.

It has joined a late-evening-early-morning scene with Saturn and Jupiter, spread out over the zodiacal constellations of Capricornus, Sagittarius, Scorpius, and Libra, therefore enriched by Antares and the other starry features of the summer Milky Way.

Jupiter was at opposition on May 9; Saturn will be on June 27, Mars on July 27. The anti-sun point, sliding steadily eastward, meets each of these planets as it hovers on or near the ecliptic. The moon, too, rushed past the anti-sun point – that is, was full, or opposite the sun – on May 29. The moon is clearly dwindling as it passes 3 degrees north of Mars early Sunday morning (June 3 at 12 UTC).

During the night on Sunday, the moon rises about 20 minutes after Mars.

Mars was near the Beehive star cluster – aka M44, or Praesepe (The Manger) – in mid-April 2010. It is the bright reddish object in the upper left of this beautiful image by Peter Wienerroither. Used with permission.

Bottom line: Mars is now rising in the middle of the night. Its July 27 opposition will mark its brightest appearance in our sky since 2003. Mars is due to brighten dramatically before then … watch for it!