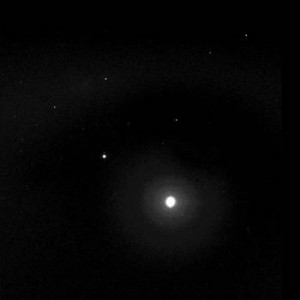 This time-lapse composite, acquired the evening of Spirit’s martian sol 585 (Aug. 26, 2005) from a perch atop “Husband Hill” in Gusev Crater, shows Phobos, the brighter moon, on the right, and Deimos, the dimmer moon, on the left. Tiny streaks mark the trails of background stars moving across the sky or the impact of cosmic rays lighting up random groups of pixels in the image.

Thank you! Your submission has been received!
Oops! Something went wrong while submitting the form.
END_OF_DOCUMENT_TOKEN_TO_BE_REPLACED