Our line of sight to bright planets today

This chart – from astronomer Guy Ottewell in England – shows the paths of the planets in April and May, and sightlines from Earth to them on April 29. 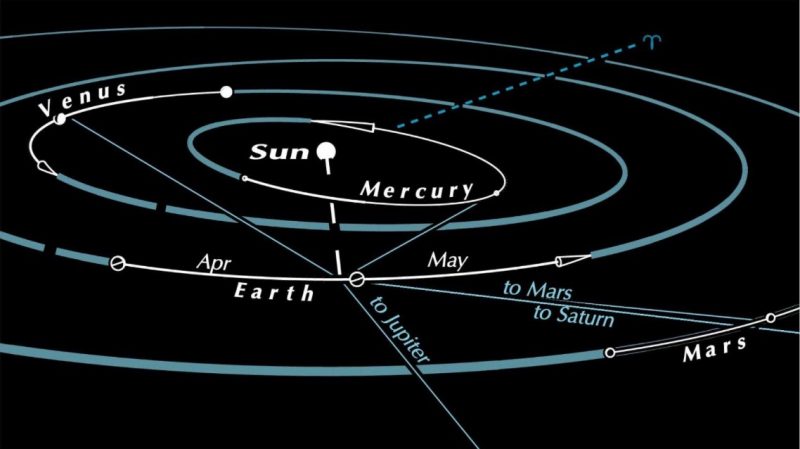 Re-printed with permission from Guy Ottewell’s blog; click here to visit him.

Here is a picture to show you the state of the solar system. The view is from 15 degrees north of the ecliptic plane, at longitude 217 degrees and 6 astronomical units from the sun. The dashed line is the vernal equinox direction (where the sun appeared to be at the March 20 equinox). The purpose is to show the paths of the planets in April and May, and sightlines from Earth to them at April 29.

You can see that the only planet in the evening sky, that is, to the “left” (east) of the sun, is Venus, still slowly climbing in that direction.

Jupiter – which is near the moon this weekend – will move into the evening sky, that is, reach opposition and be highest at midnight, on May 9. Farther on the morning side, Mars and Saturn make a group; Mars passed Saturn on April 2.

And lower, into the morning twilight, Mercury is on April 29 at greatest elongation, or angular distance from the sun. 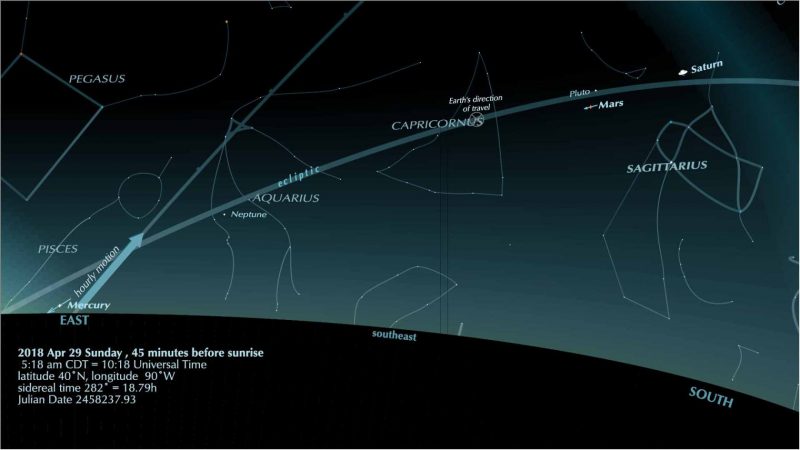 Mercury’s elongation is indeed the greatest for this year (27 degrees). And yet, because of the angle at which it comes slanting out from our north-hemisphere horizon, this is the worst, that is, worst of Mercury’s appearances from our Northern Hemisphere perspective – the paradox caused by the small planet’s oblique orbit.

Meanwhile, from the Southern Hemisphere, Mercury is at its best

Bottom line: Bright planets Jupiter, Saturn, Mars, Venus, Mercury as seen from above the solar system – with the line of sight from Earth marked – on April 29, 2018.