It’s coming closer today than any asteroid this large since 2004. It came into view of small telescopes a few hours ago. Early radar observations indicate it’s bigger than we thought.

UPDATED APRIL 19, 2017: The big asteroid that will safely sweep past Earth on Wednesday, April 19, 2017 is larger than expected, astronomers using radar say. The asteroid is safely passing us today at some 1,098,733 miles (1,768,239 km) from our planet or about 4.6 times the distance from Earth to the moon. Using the powerful radio telescope at Arecibo, Puerto Rico, astronomers were able to ping asteroid 2014 JO25 on April 17 to obtain radar images of the approaching space rock. Edgar Rivera-Valentín, a planetary scientist at Arecibo Observatory, said:

We also found the asteroid completes a rotation in about 3.5 hours.

Preliminary estimates had indicated the asteroid’s size would be about 60 times that of the asteroid that penetrated the atmosphere over Chelyabinsk, Russia in February, 2013. NASA said:

There are no known future encounters by 2014 JO25 as close as the one in 2017 through 2500. It will be among the strongest asteroid radar targets of the year. The 2017 flyby is the closest by an asteroid at least this large since the encounter by 4179 Toutatis at four lunar distances in September 2004. The next known flyby by an object with a comparable or larger diameter will occur when 800-meter-diameter asteroid 1999 AN10 approaches within one lunar distance in August 2027.

Asteroid 2014 JO25 was discovered by astronomers at the Catalina Sky Survey near Tucson, Arizona in May 2014. After analyzing the orbit of Asteroid 2014 JO25, astronomers have realized the April 19 encounter is the closest this asteroid has come to Earth for at least 400 years.

There is no danger as the space rock’s orbit is well known.

2014 JO25 is classified as a Potentially Hazardous Asteroid by the Minor Planet Center. NASA had planned to study the asteroid using the Goldstone Radar in California from April 16 to 21. The Arecibo Observatory planned high-resolution imaging using radar from April 15 to 20. Ongoing radar observations will provide a better understanding of the space rock’s size and shape.

Slooh.com also has a show on large asteroid 2014 JO25 (“The Rock”); membership required

This asteroid is sweeping so close that the flyby should also be visible in amateur telescopes, beginning in the early morning hours on Wednesday and then again on Wednesday night.

For backyard observers, an 8-inch-diameter and bigger telescope is recommended. Can it be seen with smaller telescopes? Maybe, but it should be easier to detect its motion across the stars with at least an 8-inch ‘scope. The asteroid will not be visible to the unaided eye, as it may show a brightness or magnitude between 10 and 11.

The asteroid has been located in the direction of the sun, but – during the first hours of Wednesday, April 19 – the space rock will come into view for small telescopes as it crosses the constellation of Draco. 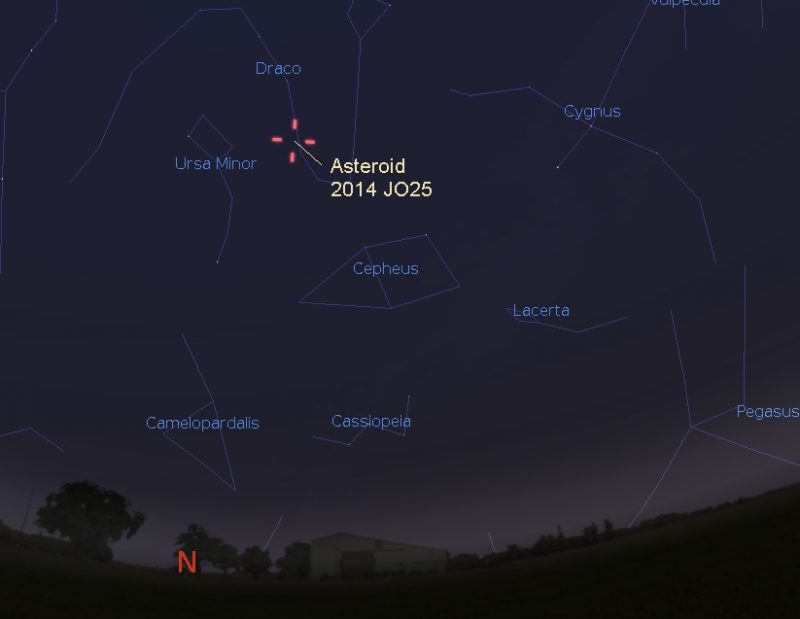 At 3:40 a.m. Central Time on April 19, asteroid 2014 JO25 will be located in front of the constellation Draco the Dragon, as seen here. Illustration by Eddie Irizarry using Stellarium. 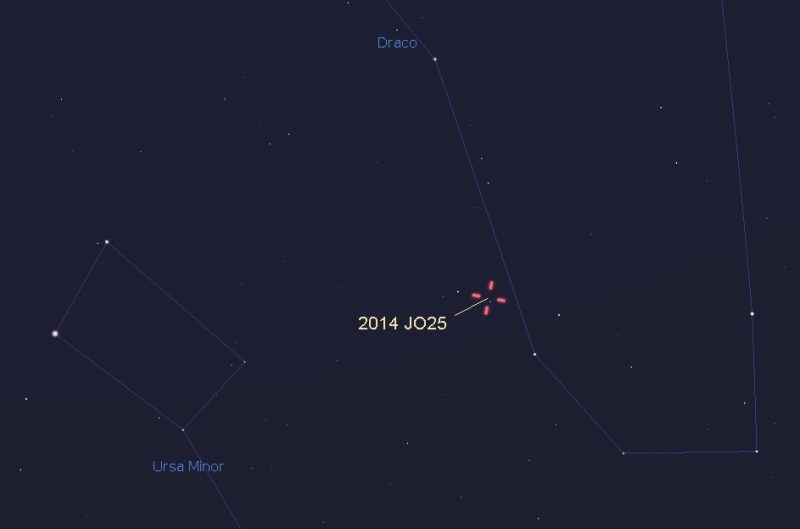 A closer view of the space rock passing by the constellation Draco early on the morning April 19. 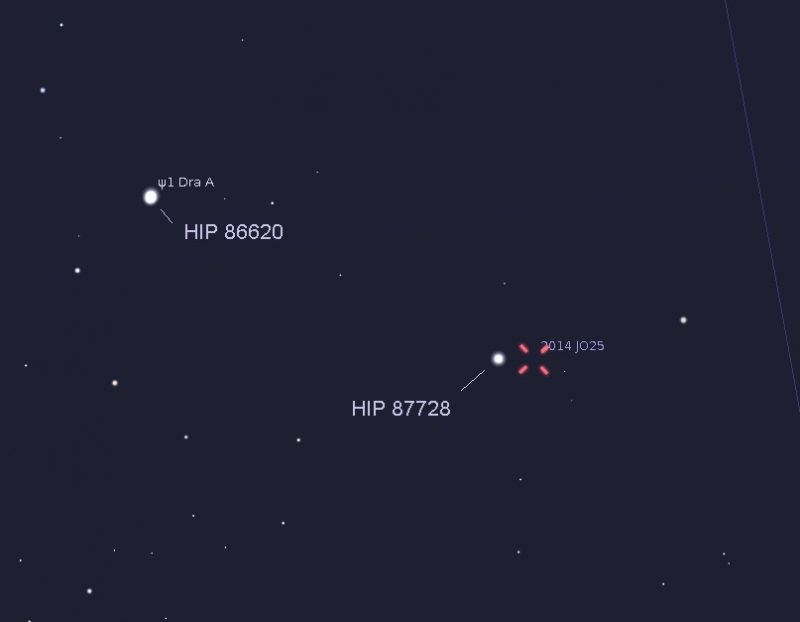 Observers using a computerized “Go To” telescope can point the instrument at star HIP 87728 a few minutes before 3:40 a.m. Central Time on April 19, and watch the asteroid passing by the magnitude 5 star in Draco. Illustration by Eddie Irizarry using Stellarium.

Then, during the night of April 19, asteroid 2014 JO25 will seem to move across the skies covering the distance equivalent to the moon’s diameter in about 18 minutes.

That’s fast enough for its motion to be detected though an amateur telescope. The best strategy to catch the space rock in your telescope is to observe a star known to be in the asteroid’s path, and wait for it.

If you are looking at the correct time and direction, the asteroid will appear as a very slowly moving “star.” Although its distance from us will make the space rock appear to move slowly, it is in fact traveling though space at a speed of 75,072 mph (120,816 km/h)!

Because it will appear to move very slowly, observers should take a good look at a reference star for a few minutes (not seconds) to detect the moving object. 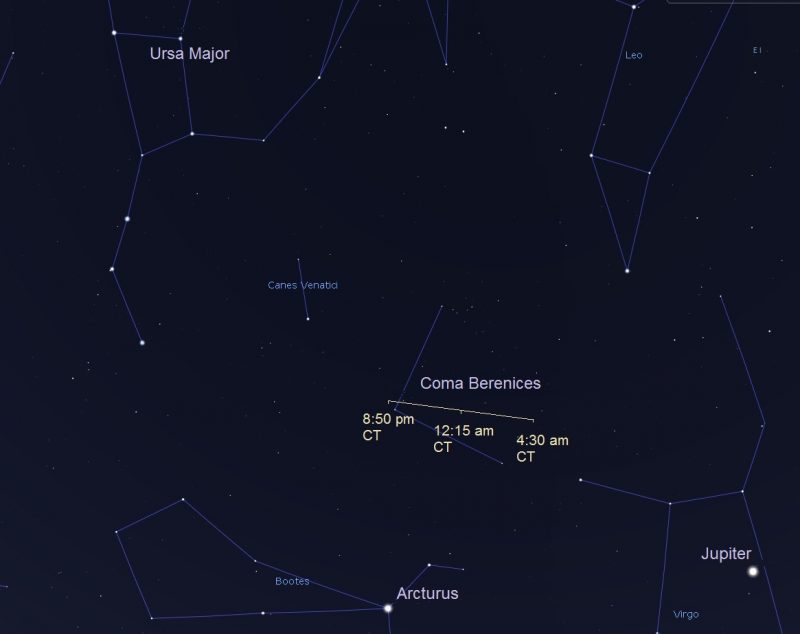 Path of Asteroid 2014 JO25 during the night of April 19-20 as seen from North America. Times shown are Central Time. Illustration by Eddie Irizarry using Stellarium. 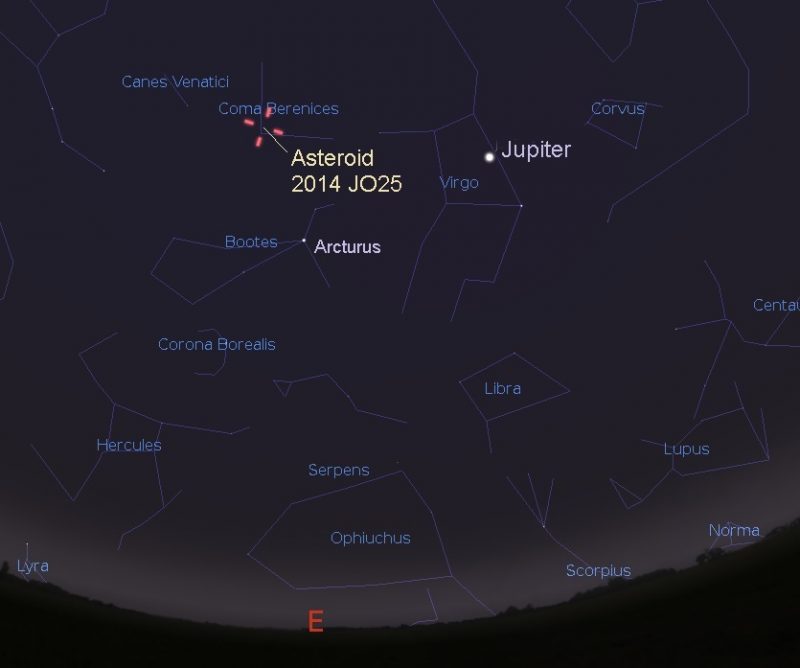 During the night of April 19, asteroid 2014 JO25 will pass though the constellations Canes Venatici and Coma Berenices. Illustration by Eddie Irizarry using Stellarium. 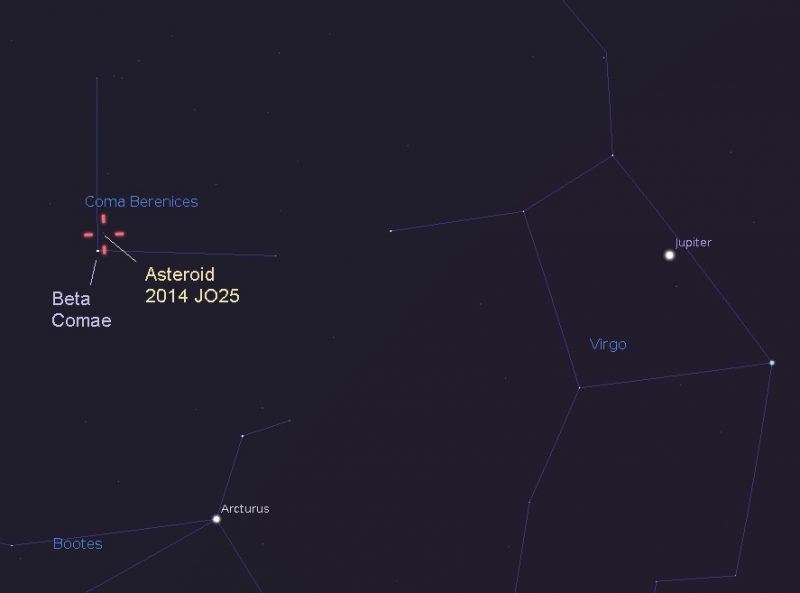 The asteroid will be close to star 41 Comae, which is very close to Beta Comae. This star is magnitude 4 and thus visible to the unaided eye. Illustration by Eddie Irizarry using Stellarium. 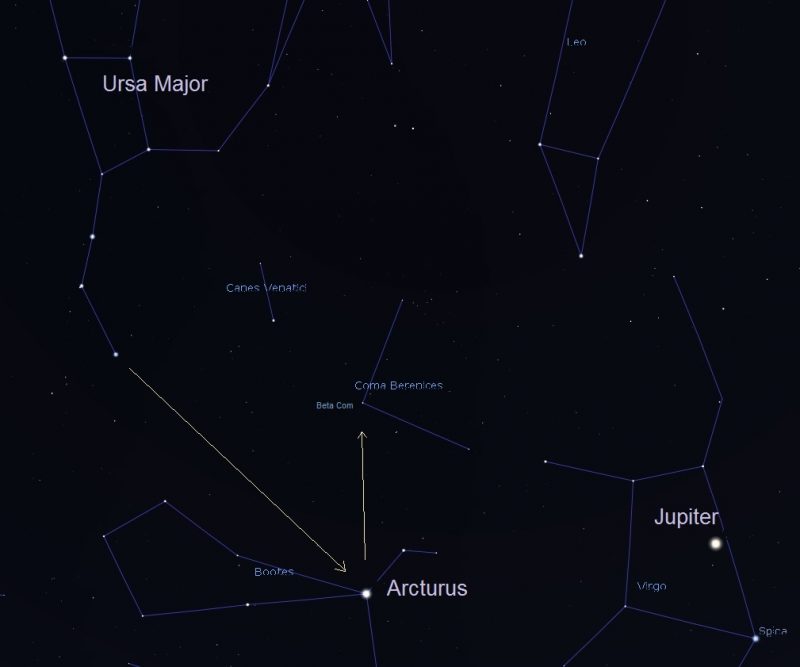 Although asteroid 2014 JO25 will be closest to Earth on the morning of Wednesday, April 19, 2017, (around 7:24 a.m. Central Time / 12:24 UTC) the space rock may look a bit brighter (but still only visible in telescopes) during the night of April 19, because the asteroid will be at a higher elevation in our skies.

Will it be visible from both hemispheres? Yes. Observers in the Northern Hemisphere will be able to locate the asteroid both on the predawn hours and during the night of April 19. From South America, the space rock will only be visible during the night of April 19, at over 25 degrees above the northern horizon. Observers in Africa and Australia will also be able to spot the asteroid on April 19-20.

The asteroid’s nearness to Earth at the time of closest approach might cause a slight parallax effect. That means the space rock’s apparent nearness on our sky’s dome to a fixed star might differ slightly, as seen from different locations across Earth. Thus, if you don’t see the asteroid at the expected time, scan one more field of view up and down from your reference star, that is, the star you are waiting to see the asteroid to pass by. 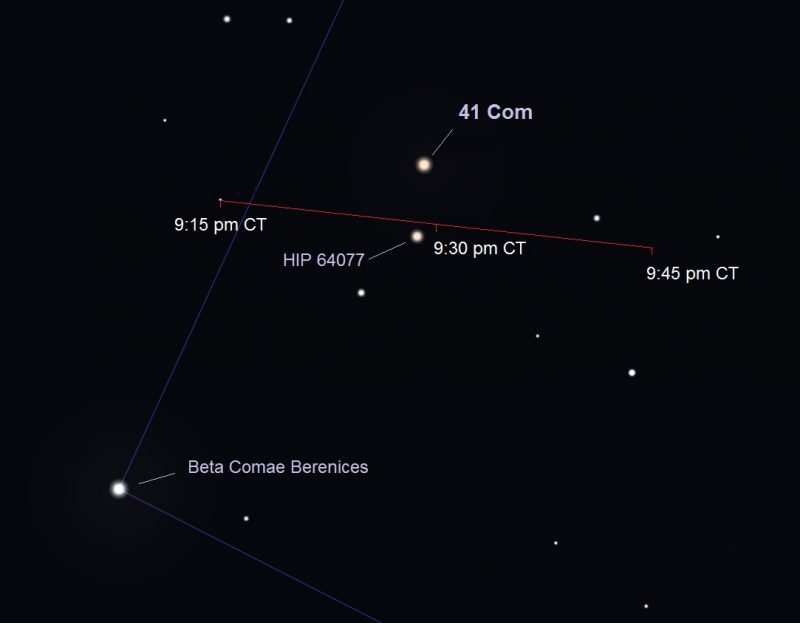 Because it’s passing close, it will be moving fast! This chart gives an idea of how fast the asteroid will look through a telescope as it passes by stars 41 Coma Berenices and HIP 64077 in Coma Berenices, at around 9:30 p.m. Central Time, on April 19, 2017. This view shows a field of view of 1.5 degrees or about 3 lunar diameters. Illustration by Eddie Irizarry using Stellarium. 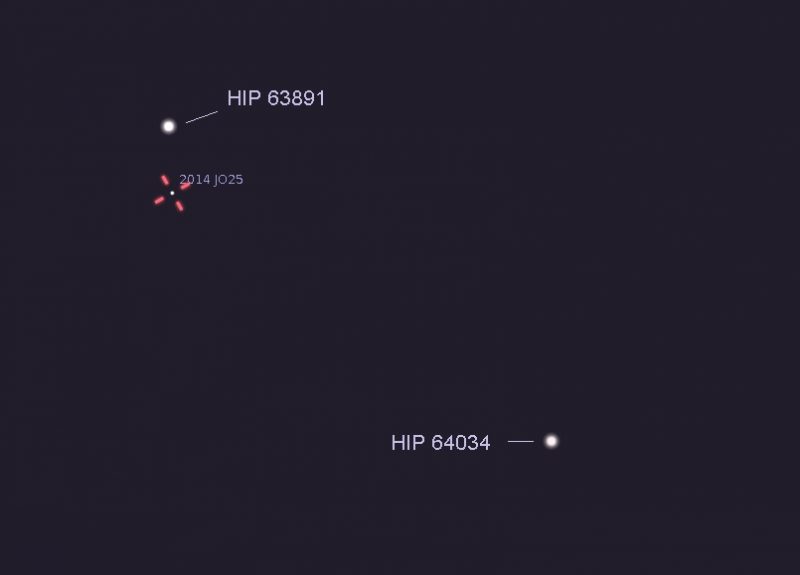 Bottom line: Asteroid 2014 JO25 – which will pass safely at 4.6 times the moon’s distance on April 19, 2017 – has now been shown via radar to be bigger than expected. People with small telescopes might be able to spot it. Charts here and other info on how to see it.