Watch for Jupiter, Saturn and the moon 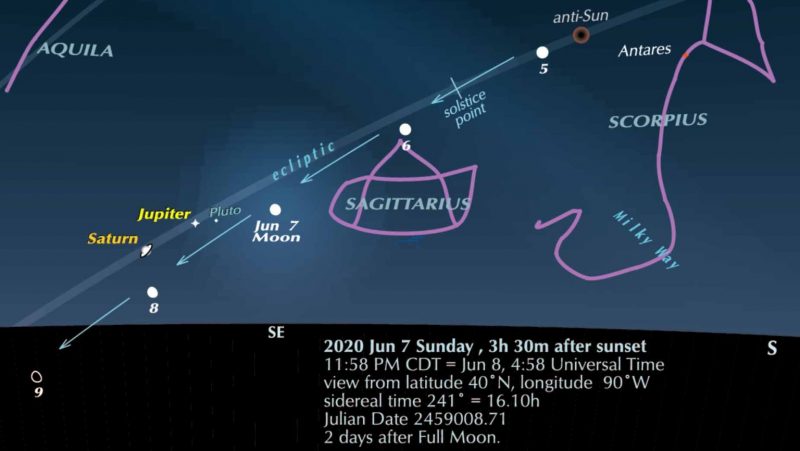 To see Jupiter and Saturn now, look outside from late night – when you’ll find them ascending in the east – until dawn. Late night on June 7, 2020 or early morning on June 8 are grand opportunities to identify them as the moon sweeps by. This chart shows the sky from 40 degrees north latitude, 3 1/2 hours after sunset. For your specific view, or a different time of night, try Stellarium-Web. Chart via Guy Ottewell’s blog.

As Jupiter continues to catch up with Saturn – preparing for their once-in-20-years great conjunction in December 2020 – the waning moon comes by, this time passing 2.2 degrees south of Jupiter on June 8 and 2.7 degrees south of Saturn on June 9.

Those angular separations – or apparent separations on or sky’s dome – refer to the center of the moon; from our northern latitudes, the moon is pushed a bit south.

In my picture at top, the moon (at twice its real size) is where it is seen from the chosen U.S. location; but the arrows connecting moon positions are along the track it would take if viewed from the center of the Earth. The difference is the effect called parallax, an effect you can experience yourself when when you hold a finger in front of your nose, but look into the distance (you see two fingers, separated by parallax).

The grouping of the three luminaries – Jupiter, Saturn and the moon – will be tightest at 22:00 UTC, 17 hours after the time of the picture and in daylight for America. The planets and the moon’s center get to be within a circle of diameter 5.06 degrees, though that is as seen from Earth’s center (parallax makes it a bit wider).

For Saturn, we show its disk, exaggerated 150 times in size, so as to show the current attitude of its rings (their north face is open toward us).

On June 7, the moon will be two days past full, so the planets will be twinkles within its glare. The magnitudes of the moon, Jupiter, and Saturn are -12, -3, and 0.

As the night goes on, the scene will slant up to higher in the sky. And then, if your sky is clear and dark, the Milky Way will become visible.

But not Pluto! Notice it on the chart at top. Pluto is more than 1,000 times too faint to be viewed with the eye. Yet telescopic observers can use Jupiter to find Pluto this year. Read more: Jupiter gives us Pluto in 2020

Now note the area marked as solstice point on the chart at top. That is where the sun is at mid-winter, at its most southerly point on the ecliptic. These planets, and the moon when opposite to the summer sun, are nearly as far south as they can be in the sky.

The anti-sun, as I call it, is also not something that can be seen, except at a lunar eclipse, when Earth’s shadow becomes visible on the moon; but it is an interesting point to contemplate. See it on the chart at top? When at or near it, the moon is full and a planet is at opposition, or most nearly opposite the sun from Earth for that year. It divides the evening sky, to the right of it, from the morning sky, to the left.

Thus, by staying up late, you get a look into the morning sky, of which Jupiter and Saturn are the heralds.