Is Sirius the most luminous star?

It’s the brightest star in Earth’s sky, so spectacularly bright that you might see glints of different colors radiating from it. But is Sirius so bright because it’s an extremely powerful star? 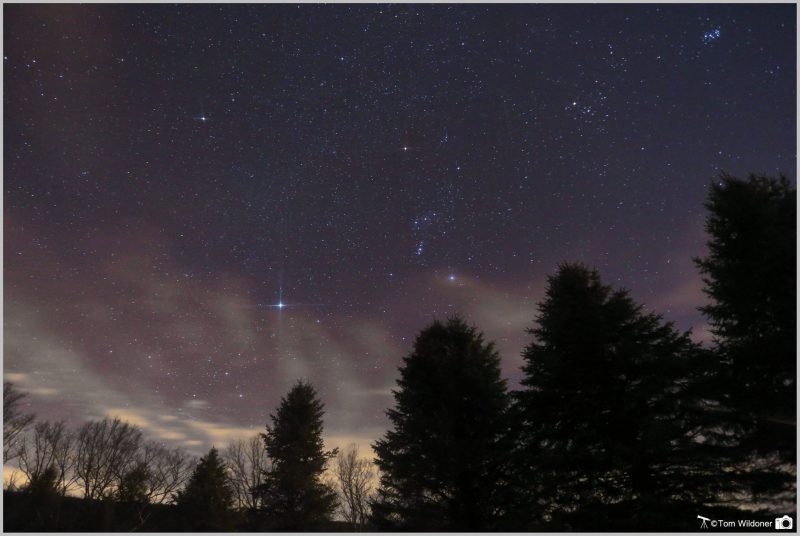 View larger. | The three Belt stars of Orion pointing toward Sirius, the sky’s brightest star, via Tom Wildoner at Dark Side Observatory.

Look outside tonight, and you can’t miss Sirius, the brightest star in the nighttime sky. Is Sirius the most luminous star? No. To astronomers, the word luminous refers to a star’s intrinsic brightness.

Sirius, in the constellation Canis Major the Greater Dog, looks extraordinarily bright in Earth’s sky. It’s our sky’s brightest star. But its brightness stems primarily from the fact that it’s only 8.6 light-years away.

No matter where you live on Earth, just follow the three medium-bright stars in Orion’s Belt to locate Sirius. 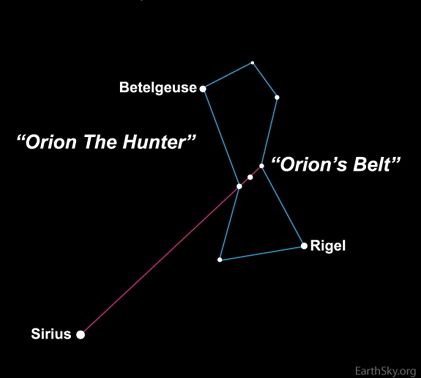 If you’re not sure the bright star you’re seeing is Sirius, remember … Orion’s Belt always points to it.

Many people comment that they see Sirius flashing colors. It happens when you see Sirius low in the sky. The colors are just the ordinary rainbow colors in white starlight; all starlight is composed of this mixture of colors. We notice the sparkling colors of Sirius more readily, though, because Sirius is so much brighter than most stars!

The extra thickness of the Earth’s atmosphere near the horizon acts like a lens or prism, breaking up starlight into the colors of the rainbow. When you see Sirius low in the sky, you’re looking through more atmosphere than when the star is overhead.

If you watch, you’ll notice Sirius sparkling less, and appearing less colorful (more strictly white) when it appears higher in the sky.

Sirius is so bright that many notice it twinkling in different colors. Amanda Cross in England wrote: “This is Sirius twinkling different colors through the atmosphere. Images were taken deliberately out of focus, using a high ISO and low shutter speed to pick up the colors. There are 31 images taken 25 seconds apart and stacked using StarStaX.” Thank you, Amanda!

Isn’t there a brighter star than Sirius in absolute magnitude which appears dimmer because of its distance?

Yes, Mia, you’re right, of course. Many stars on the sky’s dome are intrinsically more luminous than Sirius but appear fainter because they lie farther away.

At least three stars in the constellation Canis Major are thought to be thousands of times more luminous than Sirius: Aludra, Wezen, and Omicron 2. Although the distances to these faraway stars are not known with precision, Aludra and Omicron 2 reside an estimated 3,000 light-years distant, and Wezen at about 2,000 light-years. That’s in contrast to Sirius’ distance of 8.6 light-years.

To get a better idea of a star’s true luminosity, astronomers like to list stars according to absolute magnitude. Absolute magnitude measures the brightness of the stars as if they were all an equal 32.6 light-years distant.

Read more about stellar luminosity, the true brightnesses of stars 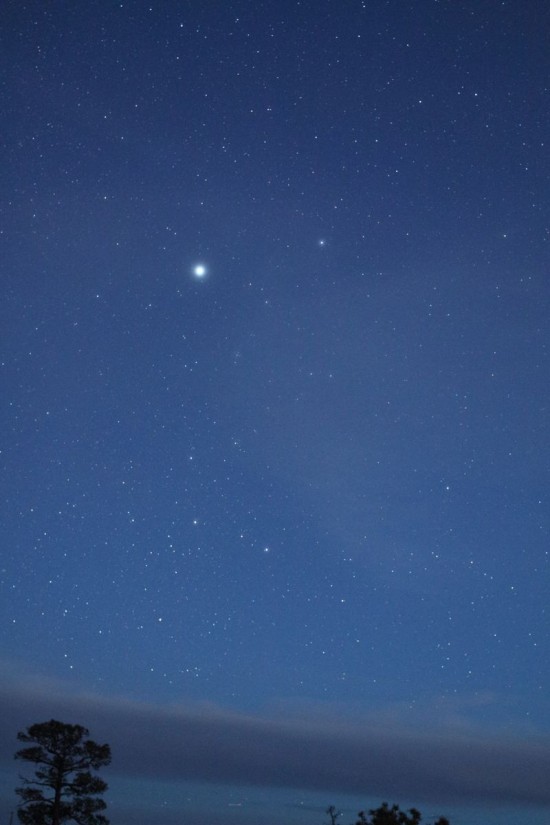 Bottom line: Sirius is our sky’s brightest star (although not as bright as the planets Jupiter and Venus), but not the most luminous star in the sky. In other words, it’s an ordinary star that only appears bright to us because it is relatively nearby.