Insights on Saturn at opposition

Astronomer Guy Ottewell offers his insights – and chart-making skills – to you during this 2020 opposition of our solar system’s golden and glorious planet of the rings, Saturn. 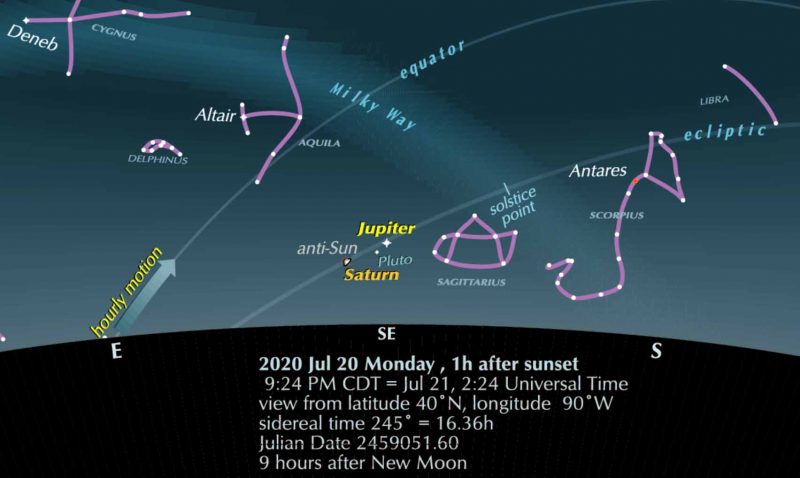 View larger. | Here is Saturn ascending in the east on the night of its opposition – July 20, 2020 – shortly after sunset, just behind Jupiter, which passed the anti-sun point (its opposition) on July 14. Chart via Guy Ottewell’s blog.

Planet Six – Saturn, long believed to be the outermost planet of our solar system – will be at opposition on July 20, 2020.

And the illustration below shows a space view: a survey of Saturn’s oppositions all around its nearly 30-year orbit, like the picture we showed for Jupiter.

If you look at the Jupiter and Saturn pictures in alternation, remember that the Saturn picture is at a smaller scale, because it reaches out farther. 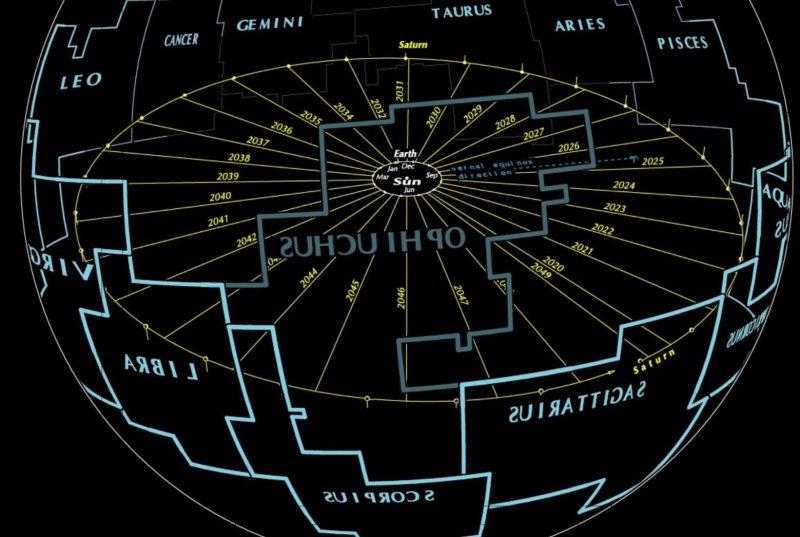 View larger. | Saturn’s oppositions all around its 29.5-year orbit. The constellation boundaries are painted on an imaginary sphere of radius 11 astronomical units or AU (sun-Earth distances). Saturn’s mean distance from the Sun is 9.5 AU. The sightlines from Earth to Saturn are at the dates of opposition each year. Remember that the dates of Saturn’s oposition are driven primarily by Earth’s motion, in its smaller, faster orbit around the sun. Illustration via Guy Ottewell’s blog.

We think of Jupiter as going around the sun in 12 years and Saturn in 30, so that Jupiter spends one year in each zodiacal constellation, and Saturn spends two and a half years in each. But, more exactly, each of those planets’ orbital periods is a bit shorter than those simple ideals. Jupiter’s is 11.85, and Saturn’s is 29.5.

Believe me, an arithmophobe has to think carefully to get even those additions right! It would be easier if we were now in the year 2001.

Each successive year, Earth has to go around an extra part of a month to overtake Saturn; so the oppositions move later in the year, until they skip a year. One falls near the end of 2032, so there is none in 2033 and the next is in early 2034.

And, the astronomical constellations being irregular, Saturn has (in this cycle) no opposition in Scorpius and two in Ophiuchus.

In the illustration above, the globes representing Saturn are exaggerated 100 times in size. Stalks from them are perpendicular to the ecliptic plane.

Bottom line: Astronomer Guy Ottewell offers his insights – and chart-making skills – to you during this 2020 opposition of our solar system’s golden and glorious planet of the rings, Saturn.