Earth in the balance today 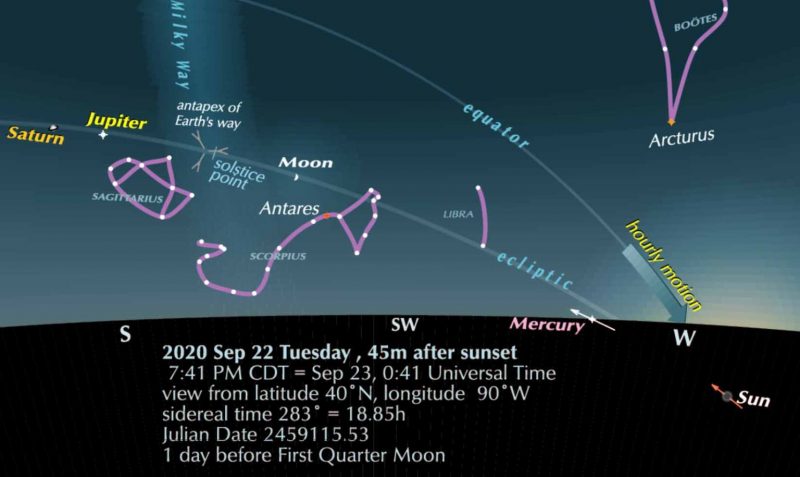 View larger. | The equinox arrives on Tuesday, September 22, 2020, at 13:30 UTC. Here is the equinoctial evening scene. Image via Guy Ottewell.

We arrive on Tuesday, September 22, 2020, at the equinox: when day and night hang (almost) equal. The sun crosses into the southern half of the sky, at a point still traditionally called the First Point of Libra (it was anciently at the beginning of Libra the Balance, though now it has been moved by precession into Virgo). The exact moment of the September 2020 equinox is 13:30 UTC on September 22, so during the preceding daylight for America.

You can see on the chart above that 90 degrees away from the September equinox point is the December solstice point, which the sun will reach at the depth of northern winter.

Near it is the antapex, away from which Earth is hurtling at the present moment in in its orbit.

Keep reading for more about the equinoxes and solstices … If you do, you’ll discover that day and night are not quite equal at the date of the equinox. In fact there is more day than night.

Also, as you can see from the illustrations below, the sun’s daily arc across your sky shifts gradually northward from December to June, then back south from June to December:

View larger. | The sun’s arc through the daytime sky, at the equinoxes and solstices, for places at latitude 40 degrees. The sun’s disk is shown at hourly intervals, and is exaggerated 4 times in size. The projection, based simply on altitude and azimuth, makes the horizon appear as a straight line; if instead we used a polar projection based on the middle of the sky, the horizon would be a circle and the sun’s arcs would be less curved. Illustration via Guy Ottewell.

View larger. | For a higher latitude, the sun’s arcs are lower. For the north pole, all would be straight lines, along the horizon at the equinoxes, above and below it at the solstices. For places on the equator, the equinox arc would curve up to altitude 90 degrees. For Southern Hemisphere latitudes, the meridian point on the horizon would be “north.” Illustration via Guy Ottewell.

The cause of the shift of the sun’s path in our sky is that the spinning Earth maintains an attitude tilted by 23.4 degrees to the ecliptic plane in which it travels around the sun. This is called the obliquity of Earth’s rotational axis.

The illustrations below show it:

View larger. | Earth’s orbit around the sun, with the solstice and equinox points indicated. Illustration via Guy Ottewell.

View larger. | The portion of Earth that faces the sun most directly changes throughout every year. Illustration via Guy Ottewell.

At the time of the March equinox, the sun, appearing to travel along the ecliptic, reaches the point (in Pisces) where it crosses the celestial equator into the northern celestial hemisphere. It passes overhead at noon for all places along Earth’s equator. Night and day are everywhere nearly equal in length, hence equi-nox, which means equal night.

At the June (or northern summer) solstice, Earth’s North Pole is tilted toward the sun at the maximal 23.4 degree angle. The sun as seen from Earth reaches the point on the ecliptic that is farthest north (23.4 degrees) of the celestial equator. It passes overhead for places along the Tropic of Cancer. For the Northern Hemisphere, days are longest, nights shortest.

At the September equinox (autumn or fall equinox for the Northern Hemisphere), the sun reaches the other point (in Virgo) where it crosses the equator, into the southern celestial hemisphere. It again passes overhead along Earth’s equator. The two poles are again equidistant from the sun, the North Pole now leaning forward. Again the hemispheres receive equal sunlight, and days and nights are almost equal.

At the December (or northern winter) solstice, the sun appears farthest south of the celestial equator. It passes overhead along the Tropic of Capricorn. Earth’s North Pole leans maximally away from the sun. For northern lands, days are shortest.

For our North Pole, the sun at the equinoxes has no altitude, appearing to run all around the horizon; it is in the sky permanently from March to September; and not at all from September to March. For lands poleward of the Arctic and Antarctic circles, these 24-hour days and 24-hour nights persist for up to six months. For lands between the tropics, the sun is sometimes north and sometimes south of overhead. For north-temperate latitudes (between the Arctic Circle and the tropics), the sun makes a slanting arch which always passes south of overhead. From March to September this arch is longer and higher, so that the sun is in the sky more than half the time; it is higher than average at each time of day; its light arrives through less atmosphere and at a steeper angle, so is more concentrated per area of ground.

These four cardinal events fall about 2/3 through March, June, September, and December.

Some of the variation is due to leap days, but the average dates have shifted over the centuries. For instance, after 2044, the March equinox will sometimes fall on March 19. Before 1931, the September equinox was sometimes on September 24.

Daylight begins and ends when the top of the sun is visible; also the sun’s apparent height is raised by refraction when it is near the horizon. For these reasons, the actual dates when day and night hours are most nearly equal are slightly before the spring equinox and after the autumn equinox; and the total of day-time in the year is longer than night-time.

I’ve taken to putting fuller discussion and illustration of recurring events like equinoxes and solstices into my Astronomical Calendar Any-Year.

I also invite you to read more in the section of my Astronomical Companion titled SEASONS.

Bottom line: Insights on the equinoxes (and solstices) from astronomer Guy Ottewell.