Have you seen Venus and Jupiter before dawn?

Venus and Jupiter – the two brightest planets – are near each other before dawn in July and early August of 2012.

Venus and Jupiter are still very close before dawn. Look east before the sun comes up. You’ll also find the bright star Aldebaran in that part of the sky, and two star clusters: the V-shaped Hyades and the tiny, misty dipper of the Pleiades or Seven Sisters. Venus is next up above the horizon, then Jupiter, and the Pleiades star cluster is above the two planets. Aldebaran, which is part of the V of the Hyades, will be below the Pleaides. In mid-July 2012, the waning crescent moon was back in this part of the sky, and we saw some beautiful sky scenes then. The moon will pass near Venus and Jupiter again around August 11 and 12, 2012 (peak mornings of the Perseid meteor shower). Wow! That’ll be a great ending to a night of meteor-watching!

The photos below are just a few of the wonderful shots of Venus and Jupiter we’re getting on EarthSky’s Facebook page. Enjoy these, and then go there to see more! Thank you to all who shared these great photos.

Venus, below, and Jupiter as seen on July 16, 2012 in Markina City, Philippines by EarthSky Facebook friend Raven Yu. Thank you Raven! 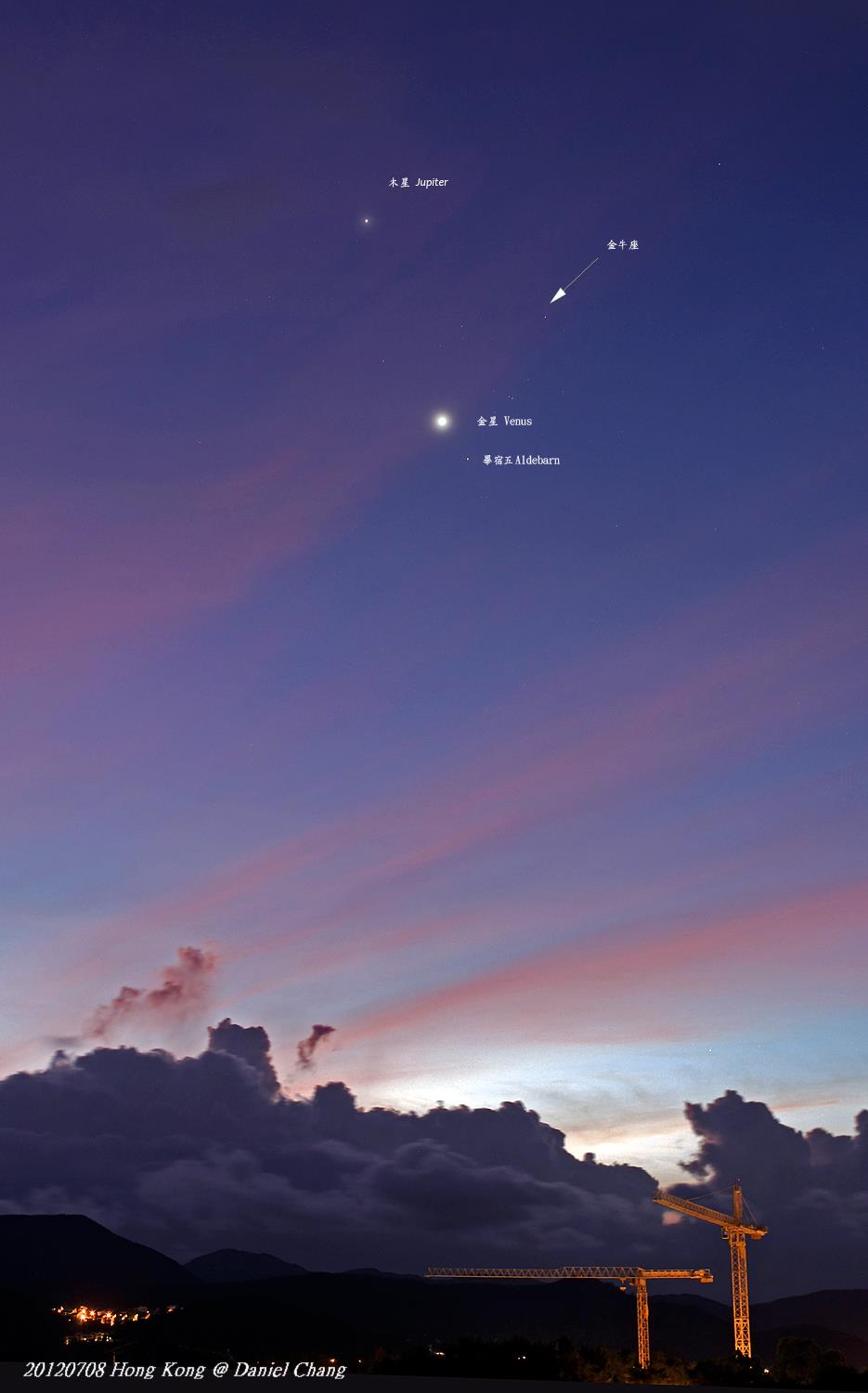 Venus, Jupiter and Aldebaran are visible from around the world. Here they are earlier on July 8, 2012 as seen by EarthSky Facebook friend Daniel Chang in Hong Kong.

Here is the view on July 7, 2012 in Villefranche, France from EarthSky Facebook friend Stefano De Rosa. From top to bottom, the dipper-shaped Pleiades star cluster, planet Jupiter, planet Venus (in the midst of the V-shaped Hyades star cluster) and the star Aldebaran just below Venus. See more of Stefano’s photos on his website.

Venus, below, and Jupiter as seen by Kevin Sanders in southern Utah on July 1, 2012.

Venus and Jupiter on June 27, 2012 from Lyle Evans in Highland, California. Venus is the bright one, closer to the horizon, and Jupiter is above.

Venus and Jupiter on June 27, 2012 from Mark E. White II in Itabirito, a small town in the Minas Gerais state of Brazil. Venus closer to the horizon, and Jupiter above. Notice the Pleiades star cluster, also called the Seven Sisters, above the planets.

Antoinette Brand in Langebaan, South Africa caught this beautiful image of Venus and Jupiter just as they were emerging from the dawn on June 20, 2012. Venus brighter and closer to horizon, Jupiter above.

Bottom line: Venus and Jupiter – the two brightest planets – are near each other before dawn in late June and July of 2012. You can’t miss them if you look toward the east. In mid-July 2012, the moon will pass through this part of the sky. Great photo opportunity.