Much of the world can see at least a partial solar eclipse on Sunday, November 3. From North America’s east coast, the eclipse will be in progress at sunrise.

On Sunday, November 3, 2013, there will be a hybrid solar eclipse. That is, the eclipse appears fleetingly as an annular – or ring eclipse – at its start in the Atlantic Ocean and becomes a brief total eclipse later on. Along the long yet narrow central eclipse path, one can see the total eclipse, but much of the world outside that exclusive path will see a partial eclipse on Sunday. The partial eclipse will be visible from far-eastern North America, the Caribbean, northern South America, southern Greenland, the Atlantic Ocean, southern Europe, Africa, Madagascar and the Middle East. Keep in mind that you’ll absolutely need proper eye protection to watch this or any solar eclipse. Please use caution to prevent blindness or severe eye injury!

No matter where you reside within the eclipse viewing area, the solar eclipse will take place sometime between sunrise and sunset on Sunday, November 3, 2013.

IMPORTANT: This eclipse happens early on Sunday, according to U.S. clocks! Online coverage begins at 1045 UTC (4:45 a.m. CST) on November 3. Also remember, for us in the U.S., Daylight Saving Time ends November 3.

Follow the links below to learn more about the November 3 solar eclipse.

Click here for more details about the total solar eclipse as seen from Africa.

Use an eclipse calculator to find out the eclipse times for your area.

Cartographer Michael Zeiler has many maps and other graphical information about this eclipse.

How to watch the November 3 total solar eclipse online. 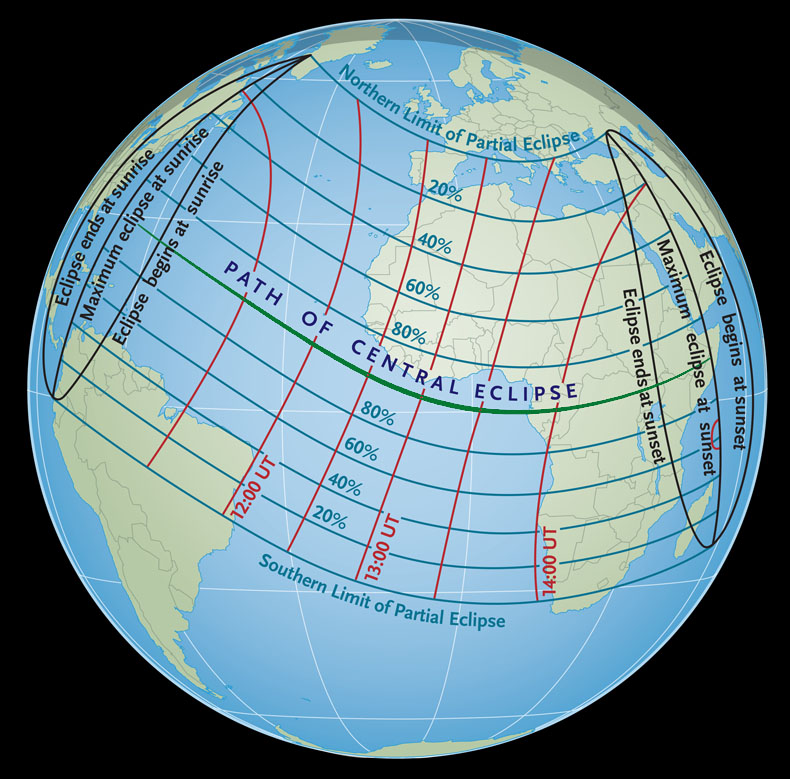 View larger. | The eclipse on November 3, 2013, begins as an annular event (far-left end of green line) but quickly becomes a total solar eclipse as the moon’s umbra crosses the Atlantic Ocean and central Africa. Illustration and caption via skyandtelescope.com.

View larger. | Annular eclipse by Hiroki Ono. On November 3, 2013, the eclipse will be annular just as it begins, over the Atlantic.

Eastern North America sees a partial solar eclipse beginning at sunrise November 3. To see this eclipse from Earth’s western hemisphere, you’ll need to be in far-eastern North America, the Caribbean and the northwestern tip of South America. From those locations, the eclipse will be seen as a very shallow (and shrinking) partial solar eclipse. It may – or may not – be perceptible as the sun rises on November 3, depending on the clarity of your eastern sky. Photographers with good sky conditions might capture some wonderful photos.

Seen from further west in the U.S. and Canada, the sun will rise with the eclipse nearly over. Assuming you have a flat horizon and good sky conditions, the western limit of the event’s visibility runs through southern Ontario, Ohio, Kentucky, Tennessee, Alabama, and the Florida Panhandle.

Any further west in North America … sorry. No eclipse for you. Watch online.

We give the local times of the eclipse for chosen cities from as far north as Montreal, Canada, and as far south as Cartagena, Colombia. If your locality isn’t mentioned, you can find out if the eclipse is visible in your area, and at what times, by using an eclipse calculator.

If the eclipse is visible for you, be sure to find an unobstructed horizon in the direction of sunrise, for the eclipsed sun will be hovering very close the horizon. Remember to use eye protection!

Europe, Africa and the Middle East see solar eclipse in afternoon hours November 3. The western portions of Europe and Africa will see the greatest eclipse around noon or early afternoon. For far-eastern Africa, Madagascar and the Middle East, the eclipse will take place in the late afternoon or close to sunset. Remember to use eye protection! 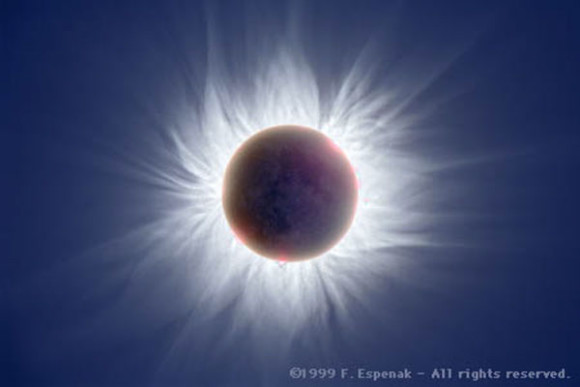 A total solar eclipse in August, 1999 by Fred Espenak. It’s a combination of 22 photographs that were digitally processed to highlight faint features. The outer pictures of the sun’s corona were digitally altered to enhance dim, outlying waves and filaments. The inner pictures of the usually dark moon were enhanced to bring out its faint glow from doubly reflected sunlight. This image was NASA’s Astronomy Picture of the Day for April 8, 2001. 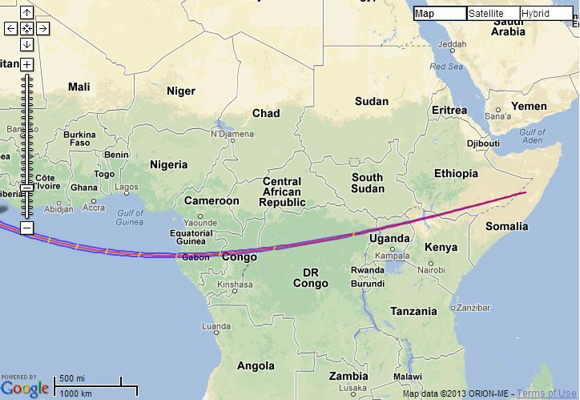 Equatorial Africa views short-lived total solar eclipse in afternoon hours November 3. Well over 99.9% of the eclipse viewing area will see varying degrees of a partial solar eclipse. On land, a total solar eclipse will be visible along a very narrow track in equatorial Africa (Gabon, Congo, Democratic Republic of the Congo, Uganda, Kenya, Ethiopia and Somalia) sometime during the afternoon hours on Sunday, November 3. At best, the total eclipse will last somewhat more than one minute (in western Gabon).

Click here for more details about the total solar eclipse as seen from Africa..

How do I translate Universal Time into my time? 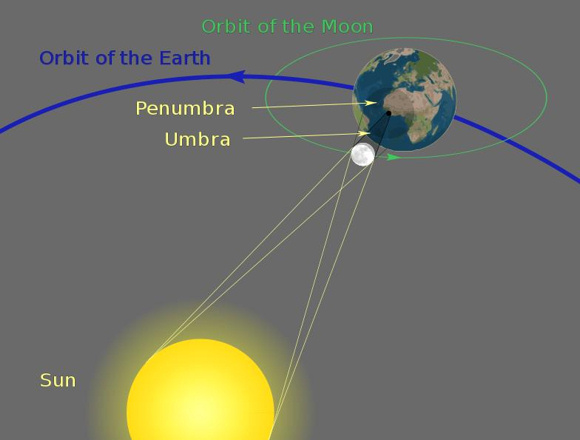 Bottom line: November 3, 2013 will bring a special kind of eclipse, a hybrid solar eclipse. That is, the eclipse will be an annular or ring eclipse at its start and a total eclipse, briefly, later on. Elsewhere, this eclipse will be partial. Be sure to protect your eyes! Time tips and times in this post.

Still not sure if or when you’ll see it? Try Fred Espenak’s list of eclipse times for many locations.

When is the next total solar eclipse in the U.S.?