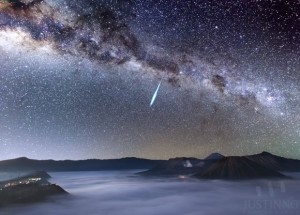 View larger. | Justin Ng of Singapore traveled to Mount Bromo, an active volcano in Indonesia, to capture this Eta Aquarid meteor in 2013. Read about how Justin Ng processed this photo on his blog.

Thank you! Your submission has been received!
Oops! Something went wrong while submitting the form.
END_OF_DOCUMENT_TOKEN_TO_BE_REPLACED