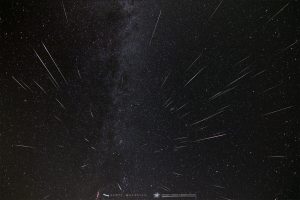 Mount: Orion Sirius EQ-G
Post-processing Details
This is a composite of all meteor captures over three nights during the 2015 Perseid Meteor Shower. I attached my camera to a German equatorial mount and tracked the radiant point of the shower, capturing 30 second exposures on interval all night.
Tell us about your image
The Perseid Meteor Shower 2015 at Frosty Drew Observatory was amazing, we had clear skies for almost the entire peak period, offering up fabulous views for hundreds of meteor watchers that descended onto the Frosty Drew campus for the event. Frosty Drew astronomers and volunteers refer to the Perseid shower as the “anti-sleep-athon” and 2015 lived up to the name! We stay up all night with the shower, process the data sets during the day and plan for the next night out. We do this for 3 consecutive days. We combat copious amounts of dew with a hairdryer, which we blast our lens with on a 10 minute interval. Certainly a challenge but the experience and result is totally worth it!
This photo is a composite of 57 Perseid meteors, clearly showcasing the Perseid Meteor Shower radiant point. On the bottom of the image is a bright fireball meteor. We captured many other non-Perseid meteors that night, though did not include them in the composite.

Thank you! Your submission has been received!
Oops! Something went wrong while submitting the form.
END_OF_DOCUMENT_TOKEN_TO_BE_REPLACED