Venus passes its descending node on Friday at 2 UTC. What is it? And why does astronomer Guy Ottewell say that nodes “shape the orbits of the moving bodies and set them up for whatever else happens” … ?

View larger. | Illustration of the orbits of Earth over a single year (2020) and of speedier Venus over 7 months. The planets, at the beginnings of the months, are exaggerated 300 times in size and the sun 5 times. Image via Guy Ottewell’s blog.

Venus will be at the descending node of its orbit on Friday, October 25, 2019 at 02:00 UTC; translate UTC to your time. By American clocks, it’ll be four or more hours earlier, on October 24.

Ascending and descending nodes keep happening and may seem among the least exciting pf astronomical events, but they shape the orbits of the moving bodies and set them up for whatever else happens. And it happens that I’ve been working on a bit for my Venus book about that planet’s plane – its inclination and nodes – and have today fashioned the space diagram at the top of this post.

It shows the orbits of Earth in a year and of speedier Venus over seven months. The planets, at the beginnings of the months, are exaggerated 300 times in size and the sun five times.

It did so eight and 16 years previously: the great transits of Venus. The cycle slowly evolves, and, in 2020, inferior conjunction will come just too soon – two days – before descending node. Note that – on the chart above – the red line for the conjunction points slightly above the sun; the blue line for the node points slightly to the right of the sun. Thus, in 2020, Venus will miss the sun on the northern side.

But the timing of the node passages determines much else. Because descending node is now, the next ascending node will be on February 15, 2020. That will cause Venus’s course next April to be seen by us far enough north that, as seen in our sky, the planet will cross the beautiful Pleiades star cluster. Then, in May, Venus will reach its northernmost point in the whole cycle. And then it will seem to rush down rapidly to the descending node in our picture.

So, back to Venus now, or, at least, Friday evening: 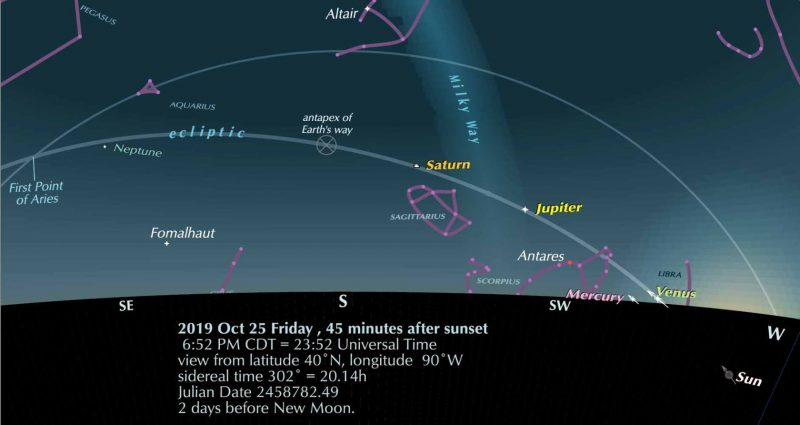 You can see that Venus is on the ecliptic. And is still almost down on the sunset horizon. But is inching out into the evening sky, and sharp observers are already monitoring it, or her.

Bottom line: A node is the intersection of one celestial body’s orbital plane with the plane of the ecliptic – that is, the plane created by Earth’s orbit around the sun – as projected onto the imaginary sphere of stars surrounding Earth. Venus will be at the descending node of its orbit on Friday, October 25, 2019 at 02:00 UTC; translate UTC to your time.

Read a definition of “node” from Encyclopedia Britannica

The definition of an orbital “node” from Wikipedia is more technical