A sense of balance, at the solstice point

At the December solstice, Earth arrives at the 4th of the year’s 4 cardinal points.

On the evening of the solstice, looking southwest from Europe or North America, you are looking at the solstice. That is, the solstice – the sun’s southernmost point in our sky – happens within a few hours of your sunset (or right at your sunset): 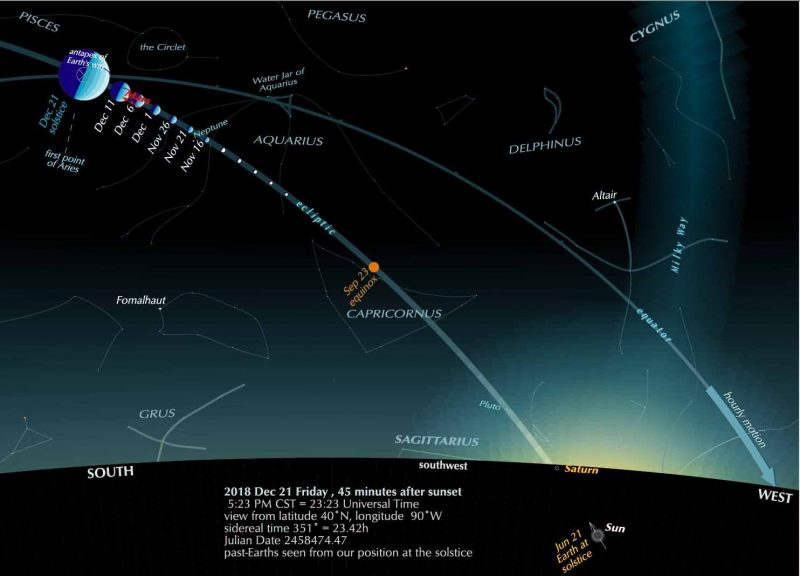 What are those disks of descending size in the chart above? They are imaginary past-Earths, as I like to call them – our Earth at points back along its orbit. These past-Earths can help you visualize the orbit itself, as if it were a hoop around the sun along which Earth is sliding. The nearest past-Earth is only an hour back, and is drawn at true size; that is, the size it would appear in our sky if a ghost of Earth had been left behind, while our actual world traveled forward. The other past-Earths are 10, 20, 30, and so on days ago, and are exaggerated 100 times in size.

The Earth of only an hour ago appears almost exactly on top of the moving point we astronomers call the antapex of Earth’s way: the direction backward, tangent to Earth’s orbit.

And, at this solstice date, the hour-ago Earth also appears almost exactly on top of another, but fixed, point in the map of the sky: the node where the ecliptic (plane of Earth’s orbit) intersects the celestial equator (imaginary line around our sky, above Earth’s equator).

So all these things have to be piled on this one point in our diagram! Also Mars, which happens at this time to be behind us in orbit, nearly 90 degrees from the sun. It’s out beyond the imaginary Earths, which would hide it, so we’ve pulled it to the front.

We’ve shown the past-Earths back along our orbit, getting smaller and smaller, as far as 60 days back – and, further back,at two more of the yearly cardinal points: the September or autumn equinox, and the June or summer solstice. You can see the September one, colored brownish for autumn leaves, in Capricornus.

And the June one is below the horizon – exactly where the sun is. Of course. It’s the Earth six months away, at the opposite side of the orbit. It’s behind the sun, so you can’t see that it’s colored yellow for summer sunshine.

You don’t have to stay up late to view this solstice scene. You can take a telescopic look at Mars, which is dimming and shrinking as we leave it behind, and passed very close north of Neptune on December 7. Saturn is already down at or below the horizon, to be behind the sun on January 2.

Be up early enough to take a look, in the twilight of the next morning, at the other side of the solstice. 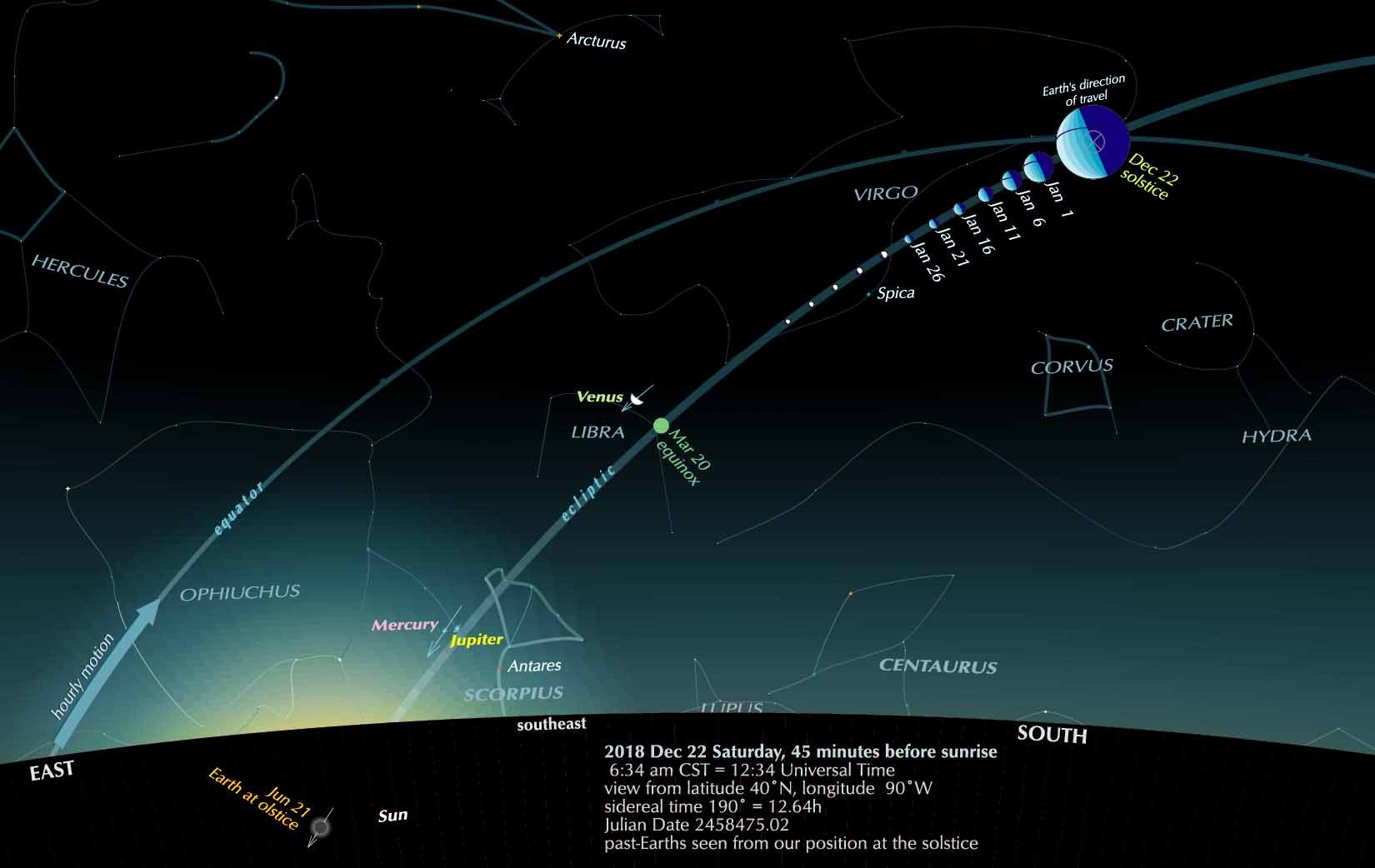 As shown in the chart above, a chain of future-Earths shows us our way forward along our orbit. The nearest, only an hour ahead and shown at true size, is 90 degrees from the sun, at the “Edot” – Earth’s direction of travel – more drily called the apex of Earth’s way. It is where the moon is when it jumps the queue in front of us, circling sunward at last quarter. And, all by geometric necessity, it is on top of the other intersection of ecliptic and celestial equator.

Down near the horizon, rising shortly before the sun, are Jupiter and Mercury. Mercury passes about a degree north of more distant Jupiter on Friday morning, December 21. Halfway up is Venus, half an astronomical unit (sun-Earth distance) away and still almost at its brightest.

Venus, very visible, happens to be conveniently showing us the invisible future-Earth of three months ahead, at the March or spring equinox.

And down there behind the sun is the Earth of six months ahead, at the next year’s June solstice.

If you contemplate the two pictures in combination – the Friday evening scene, with the Earths following behind us, and the Saturday morning scene, with the Earths marching away ahead – you can feel you are at the midpoint, the gemstone, of a ring of Earths. Hold your arms out at shoulder level, curved with fingers touching: you are at Head, the two equinoxes are your elbows, your fingers touch at the opposite solstice point beyond the sun. You are sensing our planet’s orbit as almost a solid ring that you can see in the sky (Daniel Cummings‘s idea set me thinking up these imaginary Earths).

Bottom line: A sense of balance, at the solstice point.