The comet’s orbital period is short – only 3.3 years – and the orbit is relatively close to Earth. Encke’s Comet is now on its 63rd known visit to our part of space.

Orbits of Earth and Comet Encke, with some locations in the year 2017 marked, via Guy Ottewell’s blog.

Encke’s Comet is swooping in, on the latest of its many returns.

This is the 63rd of its known visits to the inner solar system – far more than for any other comet. It is designated 2P, second in our list of recognized periodic comets after the only one exceeding it in fame, 1P Halley. It was discovered in 1786 by Pierre Méchain, during the surge of comet-enthusiasm caused by the successful prediction of Halley’s, but, like Halley’s, is known by the name not of its discoverer but of the thinker who interpreted its nature: Johann Franz Encke, a young mathematician whose years of work showed that several comets were incarnations of this same one. Its very short period, 3.3 years, and the relative closeness of its orbit to Earth’s result in its having been observed so many times.

The 3.3-year period also means that each third return is close to 10 years later and roughly similar; thus, it was at perihelion on April 19, 2007 and is now heading for a perihelion [its closest point to the sun] on March 10, 2017. 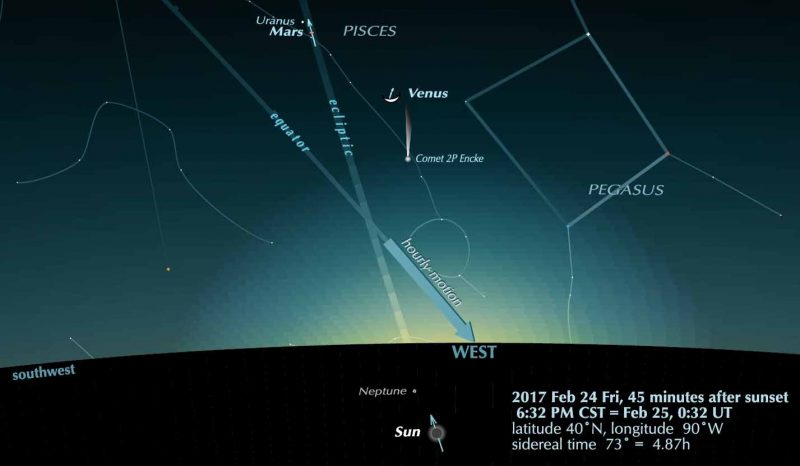 Look for Comet Encke in the west after sunset. Note that this chart is for February 24, and the comet is moving. Notice that it’s near the asterism known as the Circlet in Pisces … and see the chart below. Chart via Guy Ottewell’s blog. 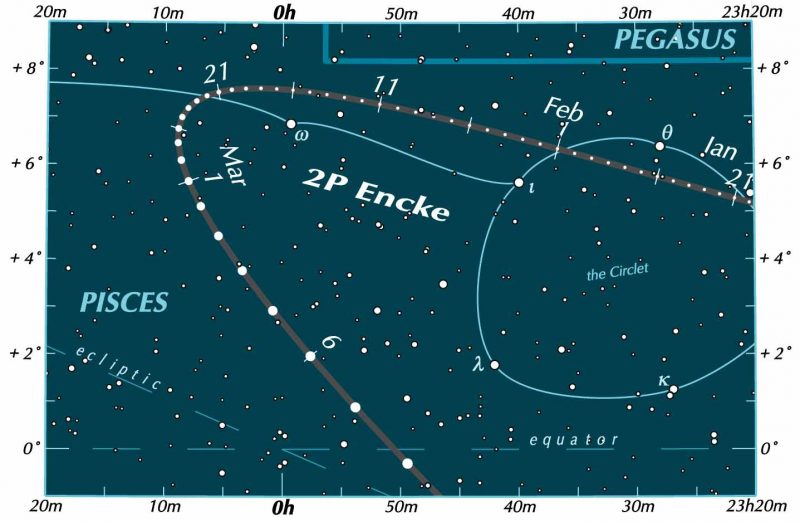 The path of Comet Encke on our sky’s dome through early March. Notice the Circlet in Pisces. In a dark sky, it’s an easily seen star pattern. The comet is in twilight, and so is the Circlet. But, still, some are locating it. See Greg Hogan’s photo at the bottom of this post. Chart via Guy Ottewell’s blog.

The comet crossed inward over our orbit, behind us and therefore in the evening sky, on January 26. So now, getting rapidly nearer to the sun, it is getting rapidly brighter, but is also about to become inconveniently nearer in angle to the setting sun.

The geometry is helpful in that the angle of the ecliptic at this time puts the comet vertically up from the sun, and it was 19° above the horizon at the time of the picture above, on February 24. It may have reached a magnitude of about 6.5, at or below the threshold for the naked eye in ideal conditions, but a target for binoculars. The moon has been deep below the evening horizon, but will be returning to the evening sky, to this part of the sky in fact, early this week. So look soon for the comet!

At perihelion, Encke’s Comet will be just about directly between us and the sun.

When, on its way out, it is at opposition in August it will be more distant and farther south. 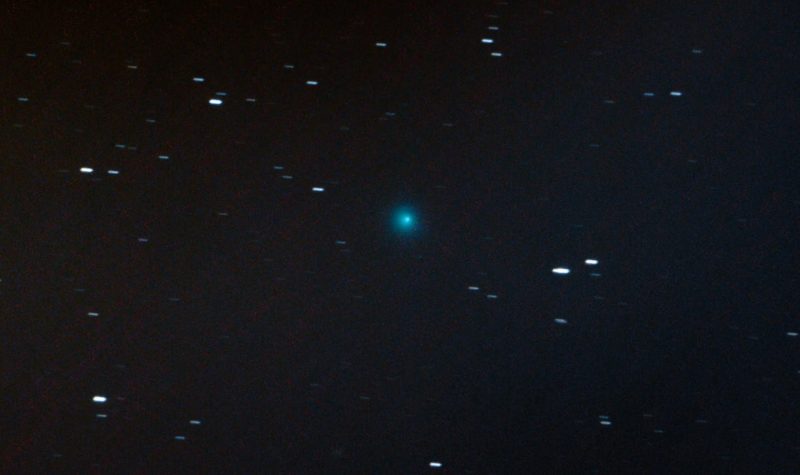 Greg Hogan in Kathleen, Georgia caught Comet Encke on February 17, 2017. He said there was no visible tail at that time.

Bottom line: Charts and information about Comet Encke, whose orbit around the sun is only 3.3 years, from Guy Ottewell.

This article was reprinted with permission from Guy Ottewell’s blog.