The peak of the Geminid meteor shower is past – but only barely. If you watch late tonight or in the wee hours tomorrow, you should still see some meteors.

We’re getting many reports from our friends on Facebook that this year’s Geminid meteor shower has been grand so far. Can you see meteors on the night of December 14-15, 2012 as well? Yes, you can, although maybe not quite as many as last night. Still, it’s worth looking outside tonight for meteors in the Geminid shower.

Tell us if you see a meteor! EarthSky’s Facebook page

In other words, the phase of the moon makes 2012 a most favorable year for watching the the Geminid meteor shower. Even in a moderately light-polluted town, many people enjoy seeing just a meteor, or two, or three, and yes you might see that many, at least. Plus it’s wonderful to go outside, feel the night air and just breathe it all in. So go! But nothing beats a dark sky away from pesky artificial lights for watching any meteor shower.

Unlike many meteor showers, which don’t start until after midnight, you can usually start watching the Geminids by 9 or 10 p.m. Watch all the way until dawn if you want. Late night December 13 to dawn December 14 was probably the peak of the shower in 2012. Meteor experts at NASA were predicting 100 meteors per hour for this shower, at last night’s peak. But on a dark, moonless night near the shower’s peak – like tonight – the Geminid meteor shower often produces a fine display of meteors.

Why are most meteor showers best after midnight? Meteors in annual showers originate as grains of dust or ice in space, left behind by comets. After midnight, the part of Earth you’re standing on has turned so that you face head on into the incoming stream of space debris. So you typically see more meteors after midnight. 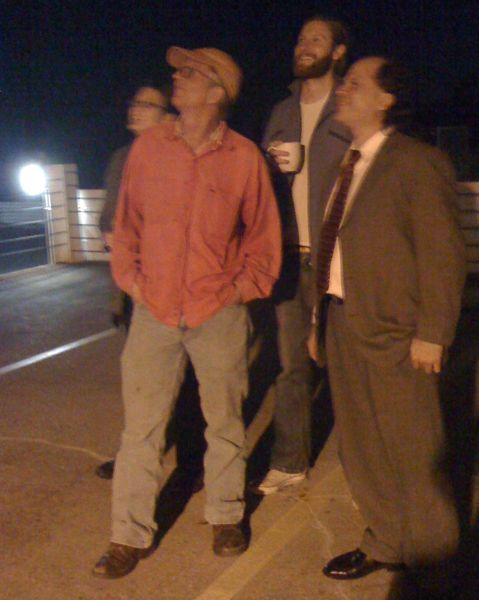 From the roof of a building in downtown Austin, Texas, the EarthSky team has seen some beautiful sights in the sky. Is it the best place to watch for meteors? No. But if you're out and about in the city, you might catch sight of a meteor streaking across your sky. Photo via Deborah Byrd.

Can you watch from the city or suburbs? Purists will shake their heads, frown and say no, but plenty of people tell us about amazing meteors they see from inside cities. If you plan to set up somewhere to watch, go out in the country. Try a state or city park. But if you are out and about in the city or suburbs, look up on the nights of meteor shower peaks! You might see a meteor.

By the way, thank you to all who posted your meteor sightings and photos on EarthSky’s Facebook page during 2012. It’s wonderful to know that so many of you enjoyed the 2012 meteors showers – even the ones drowned in moonlight!

Bottom line: You can still see Geminid meteors on the night of December 14-15, 2012. The new moon falling on December 13 guarantees us another dark night for meteor watching. Yes, we’re past the peak, but we should should still be able to see plenty of meteors streaking across the moon-free sky.