This faint comet reaches perihelion, its closest point to the sun, on October 14. It’ll be closest to Earth on October 18, passing distantly at about 67 million miles (108 million km). 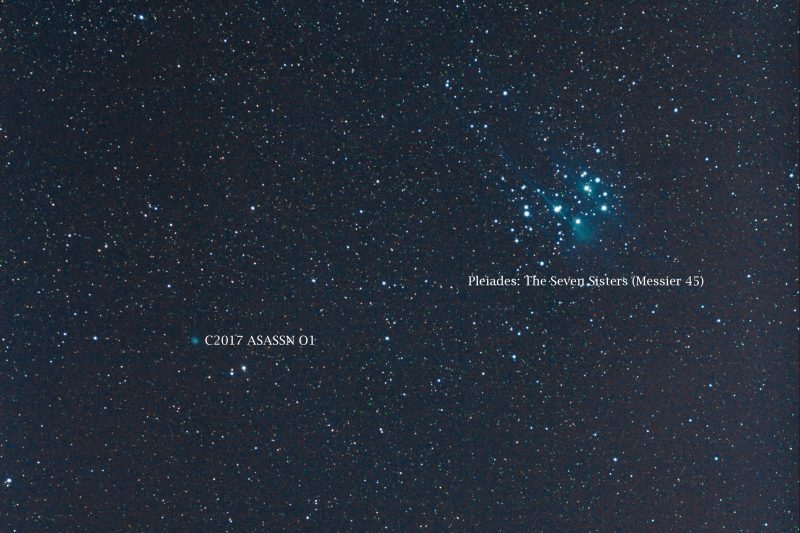 Greg Hogan in Kathleen, Georgia caught Comet C/2017 O1 (also called ASASSN1) near the Pleiades star cluster – aka the Seven Sisters – on the morning of September 18, 2017.

A recently discovered comet – although not visible to the eye alone – is becoming bright enough to view with small telescopes and binoculars. Comet C/2017 O1 (ASASSN1) is a long-period comet – presumably from the Oort Comet Cloud surrounding our solar system – first detected on July 19, 2017 from the All Sky Automated Survey for Supernovae from Cerro Tololo, Chile. In fact, it was the first comet detected by this survey. The comet had an outburst shortly after discovery and has been getting brighter, and – if you have a small telescope or good binoculars – you can start watching it now. During most of September, Comet C/2017 O1 is in front of the constellation of Taurus and shows a brightness or magnitude of 9.5.

An orbit analysis of this celestial visitor indicates it will be at perihelion, or closest to the sun, on October 14, 2017. It’ll be closest to Earth on October 18, passing distantly at about 67 million miles (108 million km) from our planet.

Comet C/2017 O1 (ASASSN1) discovery image on July 19, 2017 plus 2 more dates. The comet was at a faint magnitude +15.3 at discovery. It quickly jumped 100 times in brightness – via an outburst – to magnitude +10. In October, it’s hoped the comet will be around magnitude 8, within reach of binoculars and small telescopes. Image via Benjamin Shappee/ Wikimedia Commons.

Although comets are unpredictable, recent observations show that C2017 O1 has brightened. It is not expected to become visible to the unaided eye, but the comet may reach a magnitude of around 8. If so, it’ll be well within reach of binoculars and small telescopes.

Binoculars should reveal it as a small fuzzy patch of light in the sky. Some observers may see a hint of green color in the comet, which is caused by gases like diatomic carbon. 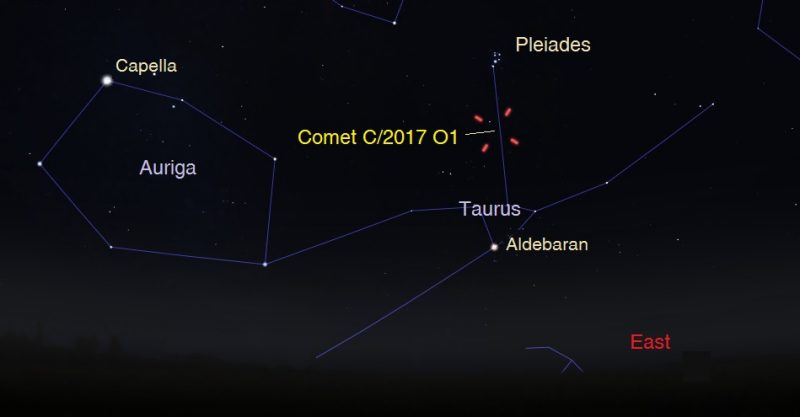 In mid-September, the comet was passing near the familiar stars of the Pleiades cluster, a group of stars visible to the unaided eye. They would have been ascending in the east shortly after midnight, highest in the sky around dawn. This chart shows September 16, as seen from central U.S. Illustration by Eddie Irizarry using Stellarium. 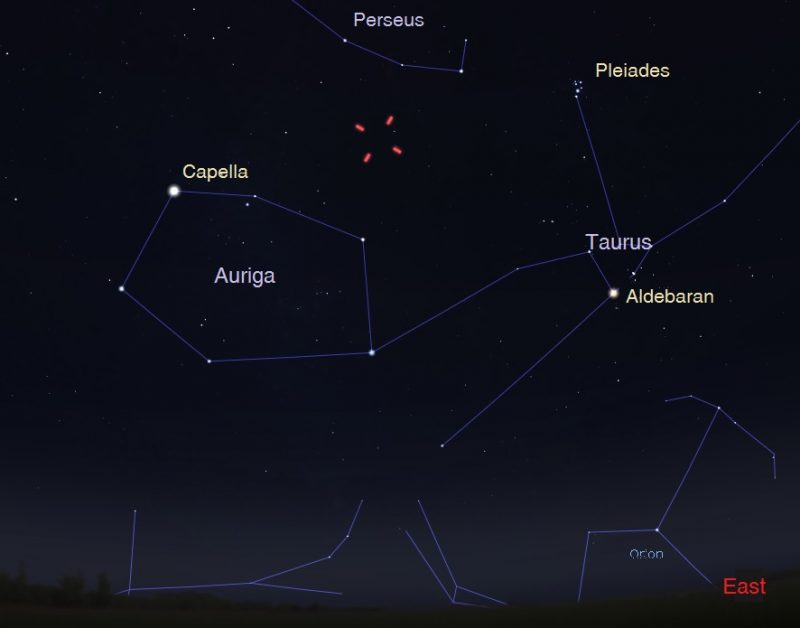 Late on the night of Saturday, September 30, comet C/2017 O1 is located between the bright star Capella, in Auriga, and the Pleiades star cluster, as seen from central U.S. Illustration by Eddie Irizarry using Stellarium. 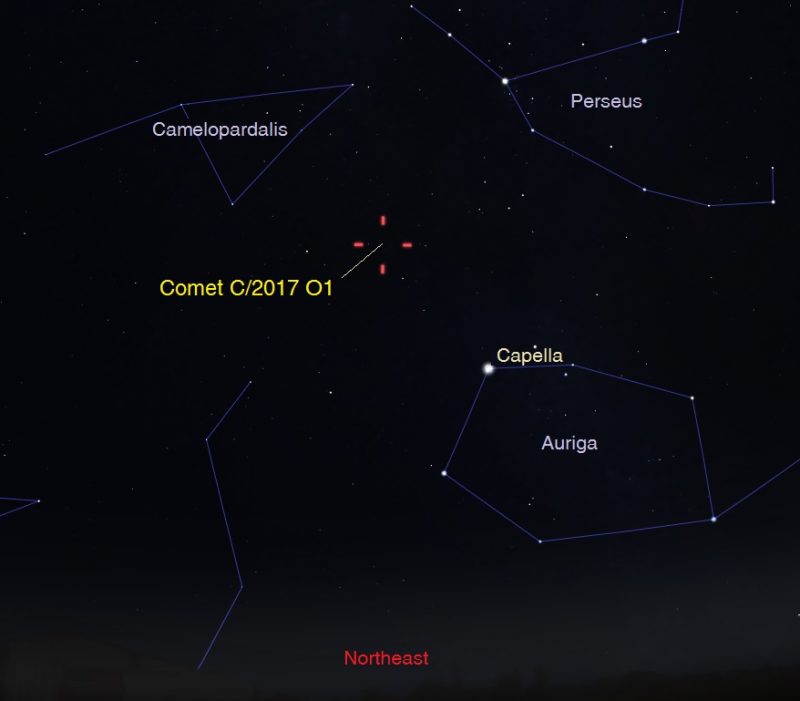 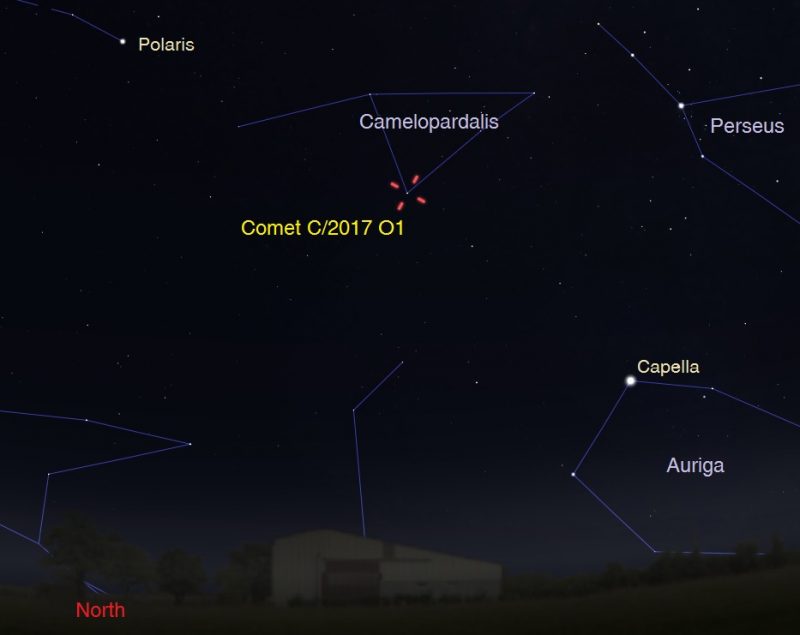 On the night of October 28, 2017 , comet C/2017 O1 passes close to star alpha Cam (HIP 22783), the brightest star of the constellation Camelopardalis. This 4th magnitude star is barely visible to the unaided eye. Illustration by Eddie Irizarry using Stellarium. 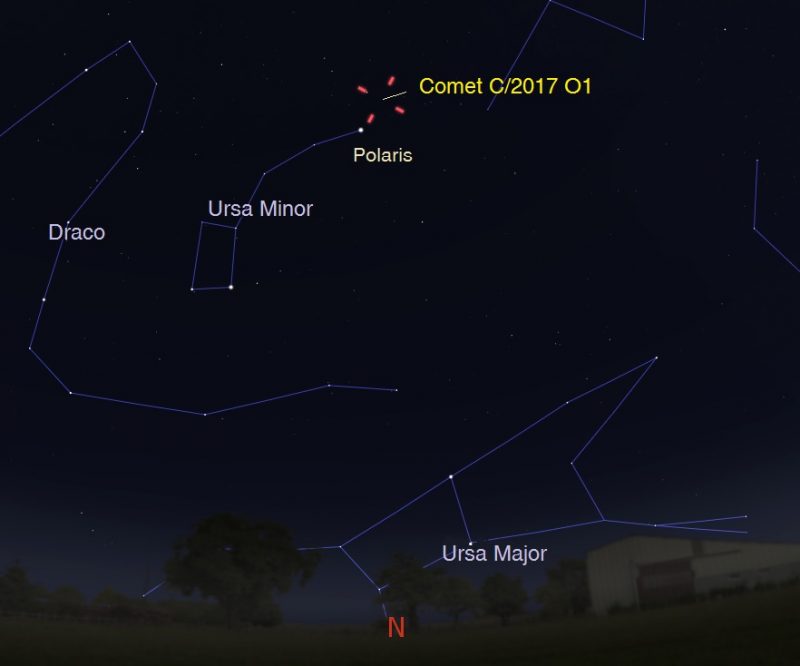 Although comet C/2017 O1 should be dimmer by December 1, 2017 , during the last month of this year the celestial visitor will be located close to Polaris, the north star. Illustration by Eddie Irizarry using Stellarium. 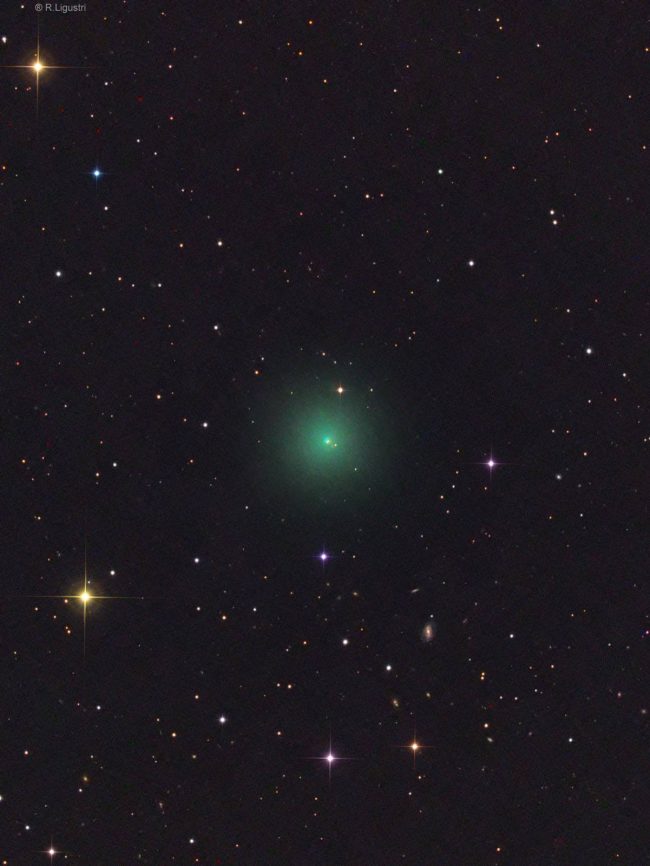