Mars will not look as big as the moon on August 27, 2011. But, in August 2011, you can see Mars as respectably bright ruddy star, in the eastern predawn sky

More about the hoax: Will Mars appear as large as a full moon in August 2011?

In August 2011, you have to stay up very late – or get up early – to see Mars. The red planet is in the eastern sky just before dawn on these August 2011 mornings. It is not as large as a full moon. But it’s getting brighter now as it approaches its March 2012 time of best viewing from Earth. Mars shines in front of the constellation Gemini now, pretty much on par with the brightness of the brightest Gemini stars Castor and Pollux. 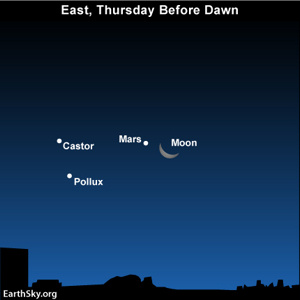 Waning crescent moon with Mars and the Gemini stars Castor and Pollux before dawn on Thursday, August 25, 2011

On August 25, the waning crescent moon will be near Mars on the sky’s dome. Use the moon to find Mars on that date, mentally noting Mars’ position relative to Castor and Pollux. On August 27 – the day of the hoax – the waning crescent moon will be much closer to the horizon but you’ll see Mars in about the same spot in front of Gemini. In August 2011, you can use the Gemini stars to guide your eye to Mars.

Mars isn’t exceptionally bright in the summer of 2011. Why not? If you did not know where to look for it, you might not even notice Mars this month. The planet is only modestly bright because it’s relatively far away from Earth now. Ever since February 2011, Earth in its orbit has been catching up Mars. After all, our orbit around the sun is smaller than Mars’ orbit. And Earth moves faster in orbit than Mars does. But we have along way to go before we catch up with the red planet – and pass between it and the sun – in early March of 2012.

Earth will come closest to Mars in March 2012, and Mars will shine about nine times more brightly than it does at present. Even so, Mars won’t be nearly as bright as the planets Venus or Jupiter. In fact, Mars won’t even be as bright as Sirius, nighttime’s brightest star.

How did the Mars hoax get started?

If Mars is only modestly bright now, why is an email circulating saying Mars will look bright and as big as a full moon? In fact, that email has circulated every summer since 2003.

Thereafter, the Earth in its faster orbit left Mars behind, and the red planet, in turn, faded in brightness. Mars swung behind the sun on February 4, 2011, returning to the morning sky. It is now in the east in the predawn hours. Earth is heading for Mars as we speak, and Earth will pass in between the sun and Mars again on March 3, 2012

That’s because Mars’ orbit around the sun is not circular. Instead, its an ellipse, like a circle someone sat down on. Depending on the opposition, Mars can be as close as 35 million miles from Earth. That was the case in August 2003, when the Mars hoax email started circulating.

In 2003, Mars came minutely closer to Earth than it had been in almost 60,000 years. These very close martian oppositions happen every 15 or 17 years. They happen when Earth passes between the sun and Mars within a few weeks of Mars’ perihelion (the point in its orbit when it is closest to the sun). Was Mars as large as the moon on August 27, 2003 then? No. But Mars was incredibly bright and amazing in 2003 – like a dot of flame in the night sky.

Still, you should look for Mars. Faint or bright, there’s something about the red planet that stirs the imagination.

Mars was near the star cluster M44 in mid April 2010. It is the bright reddish object in the upper left of this beautiful image by Peter Wienerroither. (Used with permission)

The planet Mars has fascinated earthly stargazers for thousands of years. If you were a dedicated Mars-watcher, you would understand why. This planet, which is located one step beyond Earth in orbit around the sun, spends months and months appearing as a faint dot of reddish light in our predawn sky. Then suddenly it begins to brighten and rise noticeably earlier. Soon it’s visible in the east at 3 a.m. (like now), then midnight (November 2011), then late evening (January 2012). Then it comes to opposition, when Earth is passing between Mars and the sun (as it will on March 3, 2012). At opposition, Mars is visible in the east at sunset. Around opposition, you can find Mars somewhere in the sky all night long. Then it begins to fade again, as it will in the summer of 2012.

No wonder early stargazers associated Mars with the god of war. It must have seemed as it Mars returned on a regular schedule to rule the night.

Mars is always fascinating to behold. Try spotting Mars in the east before sunrise and then watch it grow brighter in the months ahead. You can tell your friends: “I saw Mars in 2011!”