Jupiter is always closest around the time of its yearly opposition, which came on January 5, 2014. For the rest of this month, Jupiter is at its best!

Earth swept between the sun and Jupiter on January 5, 2013, as we do about every 13 months. At such times, Jupiter is opposite the sun in our sky, rising in the east just after sunset, in the west before dawn. The month following opposition – in this case, January 2014 – is the best time all year to notice Jupiter or peer at it through your binoculars or a telescope. Follow the links below to learn more about Jupiter at its best.

With binoculars, you can glimpse Jupiter’s moons. 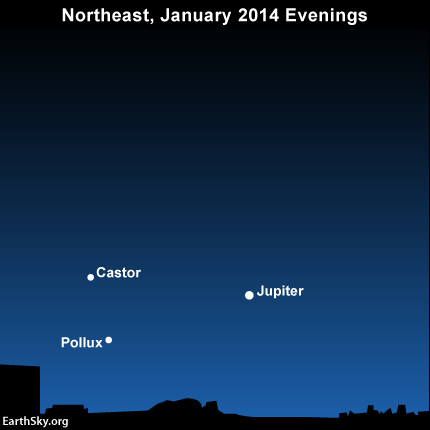 In January 2014, Jupiter can be found in the east in the evening – at its highest in the sky in the middle of the night – and in the west in the hours before dawn. It’s very bright, brighter than any star! There are two bright and noticeable stars nearby. They are Castor and Pollux in the constellation Gemini. 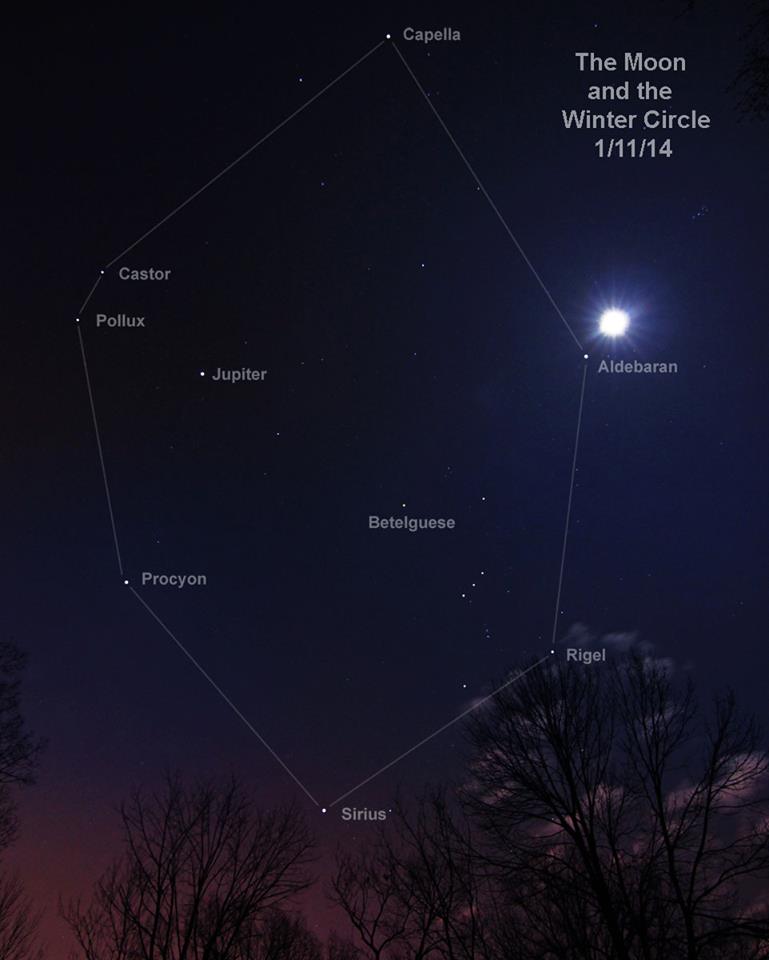 View larger. | And, in fact, there are many bright stars near Jupiter in 2014. The planet lies in the midst of what we stargazers in the Northern Hemisphere know as the Winter Circle. This beautiful photo captured January 11, 2014 by EarthSky Facebook friend Duke Marsh in Kentucky. Thank you, Duke.

Here are Mercury, Venus, Earth, Mars and Jupiter making one full revolution. Saturn and Uranus also appear in their more distant orbits. When Earth passes between the sun and Jupiter, we see Jupiter opposite the sun in our sky.

January 2014 is a good time to see Jupiter. When Earth goes between Jupiter and the sun – as we did on January 5, 2014 – astronomers say that Jupiter is in opposition to the sun. At such times, Jupiter appears opposite the sun in our sky, rising in the east at sunset. That’s where you’ll find Jupiter tonight. It comes up at the sun goes down – appears highest in the sky at midnight, when the sun is below your feet – and shines in the west in the hours before dawn.

The 2014 opposition is Jupiter’s closest until 2020. It shines more brightly than any star in the evening sky. It blazes away in front of the constellation Gemini, near the bright Gemini stars, Castor and Pollux.

In the coming years, Jupiter will be moving farther from the sun in its orbit, and so it’ll be progressively farther from Earth at each year’s opposition.

Look for Jupiter tonight with your eye alone. You can’t miss it! It’s brighter than any star.

At the January 5, 2014 opposition, Earth transited the sun as seen from Jupiter. So the phase angle between us and the moons’ orbits is small in early January. The moons are reflecting sunlight directly toward us and thus appear brighter than usual. Here’s a diagram for the night of opposition, January 5, 2014. Remember, the moons move in orbit and appear in different configurations each night. In their order outward from Jupiter, the moons are Io, Europa, Ganymede and Callisto. Chart via AstroBlog Bad Lippspringe.

With binoculars, you can glimpse Jupiter’s moons. This 2014 opposition of Jupiter was unusual in that, as seen from Jupiter, Earth transited the sun’s disk.

That may mean that this week is a better-than-usual time to try to glimpse Jupiter’s moons with binoculars. The reason is that the angle between us and the plane of the moons’ orbit around Jupiter is small now. So all the sunlight reflecting from their surfaces is coming our way. I read one estimate that the moons should have appeared 30% brighter than usual on the night of opposition, January 5. While I can’t confirm that percentage, it does seem logical that the moons are somewhat brighter around this 2014 opposition of Jupiter.

How can you see Jupiter’s moons? As always, a dark sky – away from city lights – is best. Since the moon is waxing toward full in the first two weeks of January, you might also want to check the box for moonrise/set times on this custom sunrise/set calendar.

A steadily held pair of 7×50 binoculars should reveal several of Jupiter’s four brightest moons. A tripod is excellent, but, if you don’t have one, try sitting on the ground and propping your elbows on your knees. Or prop your elbows on the hood of a car. The positions of the moons around Jupiter change from night to night.

Each of these moons, dubbed Galilean satellites because Galileo first saw them in 1610, is larger than our moon. One, Ganymede, is even bigger than Mercury. 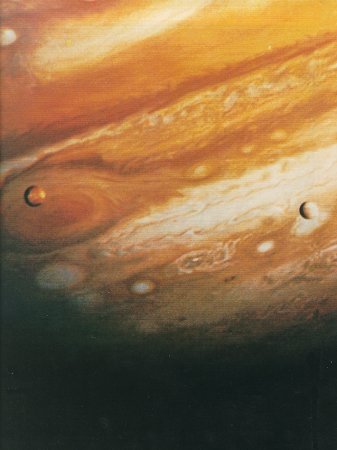 Jupiter, its Red Spot, its banded atmosphere, and two of its moons in this view taken by the Voyager 1 spacecraft from about 20 million kilometers (12 million miles) away. Each moon is about the size of Earth’s moon. Meanwhile, Jupiter could hold more than a thousand Earths. The visible moons here are Io (left), in front of the Red Spot, and Europa (right). Image via NASA.

Jupiter’s cycle of visibility in Earth’s sky. Because Jupiter is about five times Earth’s distance from the sun, it orbits the sun much more slowly than we do. It has a much greater distance to cover, and its speed in orbit is less, about 8 miles per second in contrast to Earth’s orbital speed of 18 miles per second.

Thus Jupiter takes 12 years to orbit the sun once, and it is Earth’s yearly orbit around the sun that dominates our view of this planet in the night sky.

We see Jupiter for much of every year. The only time we don’t see it is when the sun is between us and it, and it’s traveling across the sky with the sun during the day.

Jupiter’s cycle of visibility in our sky is always the same. Each year, it emerges from the sun’s glare in the east before dawn, more or less following the stars’ motion up and away from the dawn. It shifts into the midnight sky, and then the late evening sky, and then comes to opposition – when it rises in the east as the sun sets in the west – as we fly between Jupiter and the sun.

It’s fun to watch Jupiter’s progress around the sun over the course of some years. Because this planet takes 12 years to orbit the sun, and because there are 12 constellations of the Zodiac, Jupiter is in a different zodiacal constellation every year. Thus this giant planet is like a literal giant, stepping around the sky-one Zodiac constellation after another-year by year.

After the sun, Jupiter is the largest object in our solar system. It’s a mammoth world greater in volume (and more than double in mass) than all the other planets combined. That’s why – even though Jupiter is relatively distant compared to Mercury, Venus or Mars – the planet is so bright in our sky.

Whenever it’s visible, Jupiter is a bold starlike object in our sky, brighter than any star, but not so bright as Venus! Venus shines more brightly than Jupiter partly because it is relatively nearby, but mainly because its surface is covered with highly reflective clouds.

Bottom line: Earth passed between the sun and Jupiter on January 5, 2014. This is Jupiter’s yearly opposition, when it is ascending in the east just after the sun has set in the west. The planet is at its best in our sky throughout January 2014 – generally closest to Earth – and brightest.